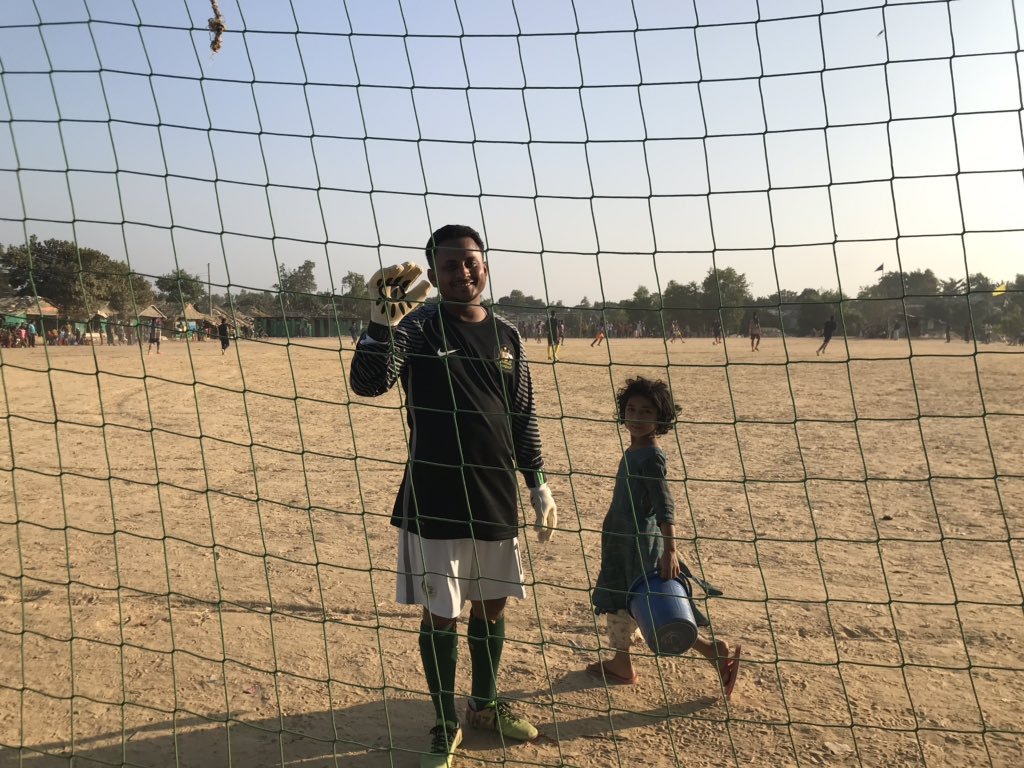 Photo by Shaun Nemorin: Playing soccer at the Kutupalong refugee camp in Bangladesh

Physical health should be “routine care” in mental health, including in refugee camps

Introduction by Croakey: The National Mental Health Commission launched the Equally Well initiative in Australia in 2017 to improve the quality of life of people living with mental illness by providing equal access to quality health care.

It aims to reduce the dramatic life expectancy gap between people living with a mental illness and the general population and where people with mental health issues often experience greater physical health challenges than the rest of the population but receive less care.

Efforts in Australia, New Zealand, and the United Kingdom to bridge that gap were showcased at the Equally Well symposium in Melbourne on Thursday and Friday, 28-29 March. See the full program.

The world’s biggest refugee camp in Bangladesh may be the last place you would expect to find an Australian exercise scientist promoting sport.

But Dr Simon Rosenbaum has been visiting the Kutupalong camp as part of research, in partnership with the International Organisation of Migration, that is exploring the use of physical activity programs like football, cricket and dance to help deeply traumatised Rohingya refugees.

Hundreds of thousands of Rohingya are living in dire circumstances at the hastily assembled camp, in one of the world’s poorest nations, having fled escalating violence across the border in Myanmar.

“It’s one of the most distressing, horrible situations I’ve ever seen in my life – a million refugees living in a tiny camp,” Rosenbaum told Croakey after his return from Bangladesh on the weekend.

“But even in that context of mass displacement and the horrendous situation they are in, people still turn to sport.”

Rosenbaum is a UNSW Scientia and National Health and Medical Research Council Research Fellow and a Director of Exercise & Sports Science Australia.

He says physical activity is a potential lifeline for the Rohingya and other refugees scattered in makeshift settlements across the globe, displaced and distressed, often experiencing idleness and boredom as well as post traumatic stress disorder (PTSD).

As well, in these camps they end up eating higher levels of processed food, salt and sugar than their usual diets, which increases the risk of non-communicable diseases (NCDs), such as cardiovascular disease and strokes, as well as obesity and diabetes.

While their plight is extreme, it reflects a common story for people with mental health issues that Rosenbaum stumbled into after completing his degree in exercise physiology, when by chance he was offered work at a private psychiatric hospital in Sydney.

“I saw firsthand the benefits of activity for people with post traumatic stress disorder (PTSD) and was frustrated they couldn’t get access to funding for exercise services because the response was that there was no evidence to support it,” he said.

In 2014, for his PhD, he led a 12-week clinical trial with 81 people, mostly former soldiers and police officers, in residential treatment at St John of God Hospital in Richmond in Sydney.

Half the patients received usual care – a combination of group therapy, medication and psychotherapy. The others had a structured, individualised exercise program combining walking and strength-based exercises in addition to usual care.

The study found that those patients who received the exercise program showed greater improvements in symptoms of PTSD, depression, anxiety and stress compared to those who received usual care alone, and slept better.

Rosenbaum says there is “much overlap” between that study and his continuing work in mental health services in Australia and his experiences working in Bangladesh and with Syrian refugees in Turkey.

The benefits of physical activity for people with mental health issues are, he says, many and varied, including “the opportunity to build self esteem, a sense of achievement, social interaction, an escape, optimism, hope, community and purpose, not to mention the physiological benefits as well for chronic mental and physical health”.

“It doesn’t matter if it’s a Rohingya refugee in a camp in Bangladesh or a person with psychosis in Sydney, they get the same benefits from exercise,” he said.

One of our biggest public health challenges

Rosenbaum will be a speaker at this week’s Equally Well national symposium in Melbourne to showcase efforts in Australia, New Zealand and the UK to improve the physical health of people living with mental illness.

According to the National Mental Health Commission, the interaction of mental illness with other chronic diseases is one of Australia’s biggest public health challenges.

A recent edition of the Mental Health Victoria and Community Mental Health Australia publication newparadigm was dedicated to the physical health concerns of people living with mental illness that “continue to go unrecognised, undiagnosed, and untreated”.

It outlined the grim statistics: almost four in every five people living with mental illness have a coexisting mortality-related physical illness, and people living with severe mental health issues have higher mortality rates than the general population with a notable life expectancy gap of between 10 and 20 years.

“Some estimates suggest that the lives of both men and women with serious mental illness are up to 30 per cent shorter than those of the general population and Australian research indicates that the gap is increasing rather than diminishing,” the Royal Australian and New Zealand College of Psychiatrists (RANZCP) says in a report on improving the physical health and life expectancy of people with serious mental illness.

The National Mental Health Commission has drawn up an Equally Well National Consensus Statement which draws on an original Equally Well model from New Zealand.

“Your biceps don’t care about your diagnosis”

Rosenbaum said the message of his presentation for mental health services and professionals will be similar to the one he brings from Bangladesh, where there is pitifully little space or equipment for sport: that often the people who stand to benefit most from physical activity are the least likely to be able to access it. 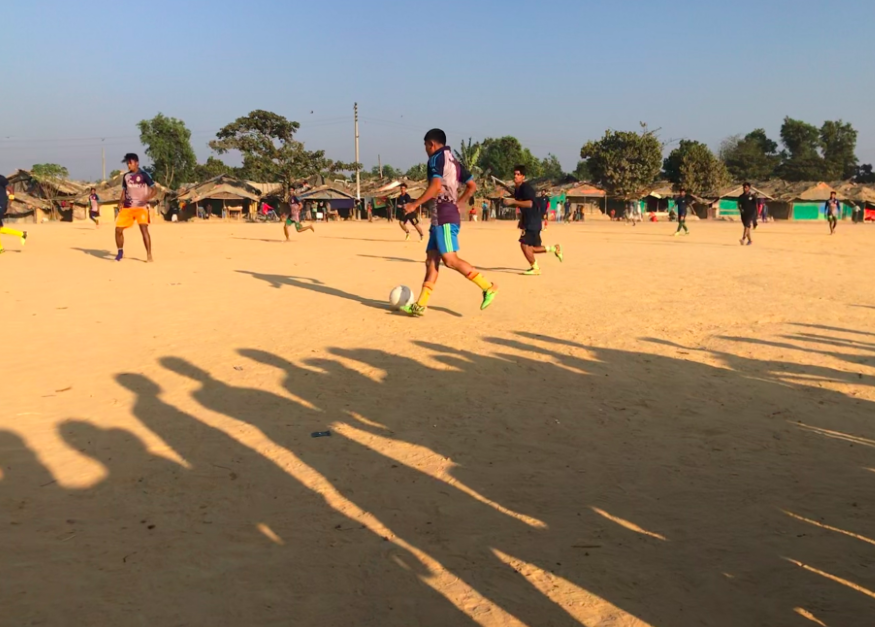 “A homeless person with schizophrenia is not going to join a gym but that person stands to benefit so much, both physically and mentally, from having access to exercise, so the question is how do we provide the systems and structures that support that?” he said.

The answer, he says, is for access to dietary advice and physical activity to be embedded in routine care, to have mental health practitioners trained in diet and lifestyle issues, including for themselves, and for exercise physiologists, dietitians and physical therapists to be trained in mental health at an undergraduate level.

“It’s about having (physical) interventions integrated as part of routine care,” he said. “It’s not treating it as an add-on, if you have time, or that’s someone else’s responsibility.

“If you’re a patient, just as you’d expect access to a psychiatrist or psychologist, likewise you could expect access to physical health interventions, whether that’s through referrals for private practice, for inpatient settings or community mental health settings.”

There have been strong moves towards that, including under Medicare’s enhanced primary care referral scheme, where GPs can refer patients with mental health issues to up to five sessions with a dietitian or physiologist.

But Rosenbaum said the scheme is under-utilised, because of “lack of awareness, training, traditional silos (in health care), and ‘diagnostic overshadowing’”, where people with mental health issues experience delays in diagnosis and treatment of physical illness because their symptoms are seen as mental health issues.

He will outline work recently done in the South East Sydney Local Health District, to be reported in the near future, to develop individual exercise programs and sustainable diets with staff, giving them direct exposure to how interventions can work.

“It’s had a significant effect on the attitudes, confidence and knowledge of the mental health workforce towards exercise and dietary interventions,” he said.

And, he says, there’s nothing that needs to be specially invented or tailored to mental health issues, whether for patients in Sydney or the refugees in Bangladesh.

That’s one of the interesting things. Your biceps don’t care what your diagnosis is. The challenge is just getting people moving and finding what they enjoy and how we can support them and build it into their life.

There’s no separate exercise program for schizophrenia or trauma, it’s about finding what they enjoy and what they want to do.”

PrevPreviousFrom the frontlines: public health and a suffocating city
NextAs bushfire and holiday seasons converge, it may be time to say goodbye to the typical Australian summer holidayNext