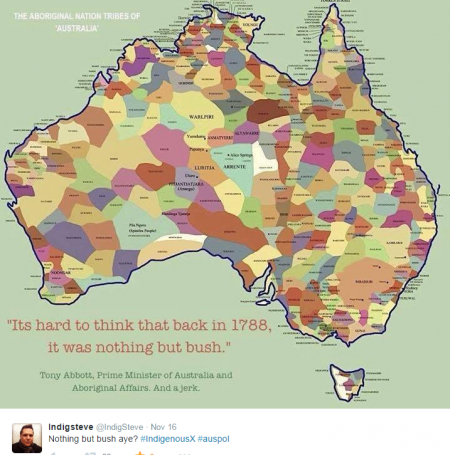 In the week that saw Prime Minister Tony Abbott declare that Australia was “nothing but bush” before the arrival of Britain’s “marines and convicts and sailors” (see his full statement and some of the Twitter reaction at the bottom of the post), two states also threatened to close remote Aboriginal communities in a dramatic funding stoush with Canberra.

Guardian Australia yesterday published a joint statement from a number of groups representing people in Fitzroy Crossing and surrounding communities saying they were “deeply fearful” about the potential impact on Indigenous people and communities of the Western Australian Government’s threat.

WA Premier Colin Barnett said last week his government may have to close “at least 100 or more” communities because the Federal Government is shifting away from providing essential services, such as power and water. He told Parliament that smaller communities were not only “not viable” but dangerous.

South Australia’s Aboriginal Affairs and Reconciliation Minister Ian Hunter also warned the closure of Aboriginal homelands in the state “is a real possibility”.

Hunter said remote Aboriginal areas needed special attention because they have no local council to service them and no rateable tax base with which to establish local government.

“Federal Governments have long understood and recognised the uniqueness of these remote communities, which is why they have continued to fund essential services for more than 50 years.”

Derby Elder Lorna Hudson (co-author of The Elders’ Report into Preventing Indigenous Self-Harm and Youth Suicide) told Croakey that Barnett’s warning had come out of the blue and left Indigenous communities frightened over who would be affected. “We only heard about it on the news, it came as a shock to everyone,” she said.

There is very recent precedent. In 2011, around 100 people were evicted from the Oombulgurri community in the eastern Kimberley after the State Government deemed it “unviable”. “There was no consultation, no plan, when they decide to do it, they just do it,” she said.

Federal Indigenous Minister Nigel Scullion says Western Australia is using the issue to justify closures it has had on the agenda for years.

“The Western Australian Government has been discussing the closure of remote Indigenous communities for a number of years, well before they agreed to take on their responsibility for municipal services in these communities.

See the posts below about the threats to the communities from Nyungah Land and Culture Protector Iva Hayward-Jackson and from Melissa Stoneham, Deputy Director of the Public Health Advocacy Institute WA at Curtin University.

The Premier has claimed that the closures would be in the best interest of Aboriginal people in the state. He has followed the old uninformed line that demonises Aboriginal men by insinuating that Aboriginal women and children are under great threat from the men in the communities.

This is all brought on by the Abbott government’s withdrawal of funding of countless Aboriginal issues including Aboriginal communities.

A small amount of the revenue from the mining sector alone would cover the cost of this and other improvement. It is only fair to share in the richness of the land with the idea of equality in the treatment of Aboriginal people. After all, Aboriginal people are the traditional “owners” of the land and waterways that holds all of the precious resources that made Australia a rich and wealthy country in the modern world.

We must remember that Aboriginal people belong to the oldest continuing culture on the planet. Aboriginal people were slaughtered, enslaved, raped pillaged and plundered by the British Colonisers. Surely in this day and age, we must listen to them and take and act seriously on Aboriginal people’s concerns.

Instead Barnett and Abbott are hell bent on destroying the Aboriginal race of Australia, however well meaning their intentions are. When will this madness stop?

Aboriginal people must be compensated as is the right and proper thing to do for a peoples who have been wrongly dispossessed of their land, culture and all of their belongings. This is the least that can be done instead of dragging a peoples into the future that only offers death and destruction of them and their culture.

How cruel and inhuman is it to force Aboriginal people from their Sacred Lands and Waterways only to end up at the Colonisers’ rubbish tip or outside the bottle shop at the hands of unscrupulous people with evil intentions of abuse and if that is not enough then Aboriginal people will be caught by the authorities and imprisoned where they will more than likely “never make it out alive.”

The fact is that Australia has the highest incarceration rate and the highest suicide rate of Indigenous Peoples on the planet. After all, many of us are forced into this position by alcohol, drugs, prostitution and other evils introduced by you, the Colonisers. This is the reality of Aboriginal people in the State of Western Australia – no hope , no future and the reality is that Aboriginal people are never listened to and our thoughts are never acted upon.

Not even the so called free and open media will even help us anymore. We are left to the genocidal politicians to devour our corpses.

Australia just refuses to look back at the atrocities of the past and acknowledge the rape pillage and plunder by the British Empire upon the Aboriginal Nations of this continent and surrounding islands.

Why have we never been treated as Equals and why have you, the Colonisers, not shared with us so that we may  have all prospered on the Sacred Lands and Waterways that have belonged to Aboriginal peoples and our Ancestors since the beginning of time? Why are you so greedy that you will direct us all to a future of poisoned Land and Waterways that will not sustain us all into the future?

Aboriginal Ancestors installed in us to protect and preserve our environment for future generations. Why do you have a society that is selfish and is built on lies and dishonest explanations of the past? Why does your culture give a few much wealth and many little or nothing?

Nyungah Warrior Yagan once said: “You came to our country, you have driven us from our haunts and disturbed us in our occupations as we walk on our own country, we are fired upon by the white man. Why should the white man treat us so?”

It was once said by the old people: “Jangga Meenya Bomunggur” – “The smell of the White man is killing us.”

Forcibly removing Aboriginal people from their land is bad policy

It was a dark day on the 24 September 2014, when Minister Scullion announced that the Australian Government had reached historic agreements with the Queensland, Western Australian, Victorian and Tasmanian governments for those states to take on responsibility for municipal and essential services in remote Indigenous communities. These services include supply of power and water and the management of infrastructure.

At the time Scullion commented that “the Governments of these states have shown great leadership in taking responsibility for these communities and for their Aboriginal and Torres Strait Islander constituents. I look forward to seeing the positive work of these governments from these agreements.” The SA Government refused the offer.

So what about these positive works that Minister Scullion alluded to? In a media statement, Scullion advised that successive Australian Governments had been supporting these services in remote Indigenous communities for decades and that they had attempted to transition the arrangements for essential service to states. Since 2010, funding has been extended to states for 12 months on two separate occasions while new arrangements were being negotiated with states. He stated that this involvement of the Commonwealth has confused the issue and led to inconsistent and ad-hoc services for residents of remote communities.

Fast forward to last week when WA’s Premier Colin Barnett announced that he intends to shut about half the state’s 274 remote communities which will affect more than 12,000 Aboriginal people living in these small communities and the towns they intend to move to. Barnett said that existing high rates of suicide, poor health and a lack of jobs could not be ignored. Will this policy decision reduce the inconsistent and ad-hoc services for residents of remote communities? I think not.

The underlying issue surrounding the forced move is all about connection to land. If our First Nation peoples are moved from Country, these disparities are surely set to rise. Already we have three times more Aboriginal people likely to commit suicide than non-Aboriginal people. Suicides accounted for 4.2% of all registered deaths of people identified as Aboriginal and Torres Strait Islander in 2010, compared with 1.6% for all Australians. But this is just the tip of the iceberg, as for every suicide; there are hundreds of attempted suicides – with the ABS reporting collated hospital data that validate the extent of suicidal thought moving beyond ideation.

Forcibly moving Aboriginal people from their land into already strained and stressed towns will not reduce these rates. For Aboriginal people the relationship with land runs deep. The land owns Aboriginal people and every aspect of their lives is connected to it. They have a profound spiritual connection to land. As reported in the most recent edition of the West Australian Indigenous Storybook, the NyulNyal Rangers, based in Beagle Bay said that “Country is a big part of who we are. It’s an honour and privilege for us to maintain our responsibility as Indigenous people on our lands. The unique relationship that we have with the natural environment is something that we feel is rare and preserving our way of life and our traditional beliefs and principles is vitally important to us.”

Making Aboriginal people move to larger towns is not that answer. Despite the predicted rise in poor health outcomes and increase in mental health and suicide rates, the accessibility of housing will be another major hurdle.  Homelessness is already an issue. For example, in the Kimberley region of Western Australia, the Aboriginal homelessness rate has risen to between 15 to 25%,with nearly 700 per 10,000 homeless. This is far above all other Australian regions and one of the world’s worst homelessness rates. On census night in 2011, Aboriginal and Torres Strait Islander Australians accounted for 25% of all persons who were homeless (26,744). Of those, 75% were living in ‘severely’ crowded dwellings, 12% were in supported accommodation for the homeless and 6% were in improvised dwellings, tents or sleeping out. How will moving more people into already crowded communities be anything but detrimental to health and wellbeing?

The one comment of Barnett’s I do agree with is that we can no longer accept the lack of employment opportunities for Aboriginal people. Yet given the fact that these communities have been neglected by State and Federal government jurisdictions and their agencies for at least the past few decades, I cannot fathom how moving people from their land to become fringe dwellers will actually ease this situation. What continues to be missing in many of these communities, despite their size, are pathways and access to job opportunities and to the benefits of education.

There are simply no positives from this decision to forcibly move Aboriginal people from their lands – it is just bad policy. 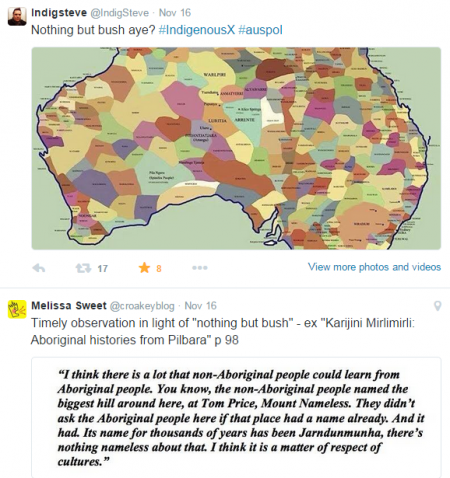 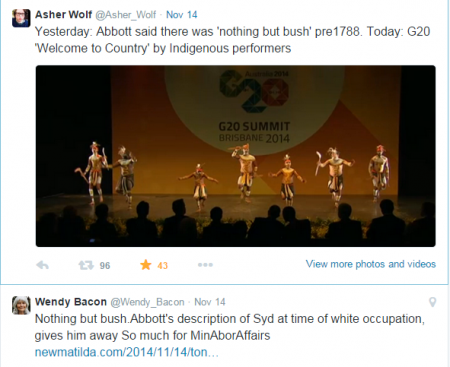 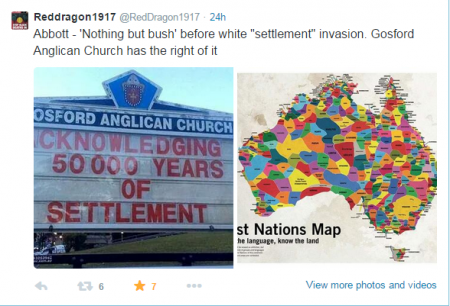