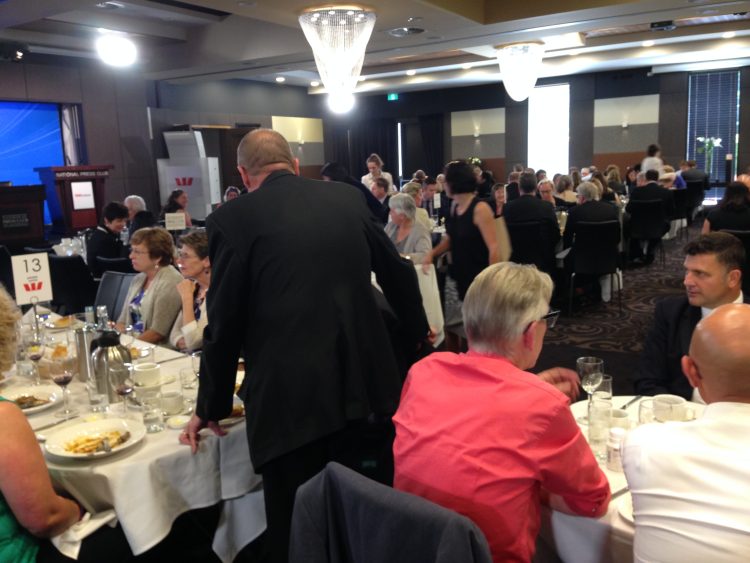 There was a full house today at the National Press Club for what was billed as the ‘Public Health Crisis Meeting’. The gathering was organised by the Public Health Association of Australia to protest against the planned cuts to flexible funds which will affect hundreds of health organisations and services throughout the country.

The three speakers were Michael Moore, CEO of the Public Health Association, Rod Wellington, CEO of SARRAH (peak body for rural allied health workers) and Sheila McHale, CEO of a WA-based drug and alcohol service and an ex-WA Minister for Disabilities. Each speaker described the impact that the planned cuts will have on their sector and argued for a greater investment in public health and preventive health care.

Both Michael Moore and Sheila McHugh identified a number of high priority areas that would be particularly affected by the Budget cuts, including Indigenous health, chronic disease programs, drug and alcohol services, men’s and women’s health programs and children’s early intervention services.

The need for our health system to improve the way in which it deals with chronic diseases was a key theme discussed by all there speakers and supported by the audience. A number of examples were provided of successful cross-disciplinary programs targeting chronic diseases which are now in danger, due to the planned cuts.

Chronic disease is regarded as Australia's greatest health burden, yet not immune from funding cuts. @mmoore50 @_PHAA_ at #NPC #Hlthcrisis

Rod Wellington discussed the important role that allied health plays in chronic disease management and advocated for increased resources to this sector, in particular in rural areas.

Sheila McHale provided examples of how successfully people with drug and alcohol addictions had overcome their dependence and were now able to re-enter society.

There were repeated arguments made for the continued support for successful programs which prevent future ‘downstream’ costs due to increased use of hospitals, law enforcement services and prisons.

Woah!! @sussanley 'Half of all Australians have a chronic disease. 20% have two.' #hlthcrisis

Before and after the event audience members from affected organisations discussed how the uncertainty and threat of imminent funding loss impacted on them. Many said that they felt committed to the sector and to their work but that the lack of certainty about their future was undermining the morale at their organisations.

Others felt let down at the Government’s seeming lack of concern about the impact of the proposed cuts. The possibility that advocacy organisations may be targeted, rather than those who provide direct services, was also discussed. Many felt that this distinction was not clear as they had previously worked constructively with governments in the development of policies and programs in their areas and that their contribution as experts in their field was very valuable.

The NLC address, including the three presentations, today can be viewed on ABC iview

The full text of Michael Moore’s speech today is below.

I begin by acknowledging the traditional owners of the land on which we meet, the Ngunnawal people. I would also like to acknowledge and welcome other Aboriginal and Torres Strait Islander people who are attending today’s event. And to express thanks to the National Press Club for facilitating this important conversation about cuts to health funding.

It’s not a very happy time for supporters of the community health sector in Australia. Unfortunately, the government’s plans to cut nearly $800 million in funding to key health initiatives is just part of the story.

Although it has been difficult to ascertain, the cuts that are our focus today account for around 10% of the Flexible Funds. It is $793.3 million dollars. Nearly $800 million goes a long way in the not for profit sector.

Unfortunately, it is not just the cuts. Eighteen months after the first announcement (in Joe Hockey’s first budget) there is still no clarity in relation to how these cuts are to be achieved. Appalling! When most existing funding contracts for non-government organisations are set to expire either at the end of 2015 or on 30 June 2016.

As best we can glean – there are 14 Flexible Funds under the gun.

The uncertainty is taking serious toll on all the services, the organisations and the staff as well as the people and communities who currently access these services.

The Public Health Association of Australia is working with a coalition of peak and non-government organisations to explain the possible impacts of these cuts.

This sort of cutting does not have to happen. The Abbott government was quick to remove taxes on the mining sector and the carbon tax while looking for a 5% increase in the GST. The impact is simple. Less taxes equals less services. The wealthy, who are likely to get the most benefit from cuts to taxation are not the ones in need of services. They can manage.

So it’s a double whammy for ordinary Australians. Less services if the Flexible Funds are cut and a greater burden of taxation if the government gets its way by introducing increases to the regressive GST.

At least Scott Morrison and Malcolm Turnbull are asking for an open discussion on taxation. Let’s hope the outcome is actually a “fair go” for all Australians.

There have been over 20 organisations who been leading this campaign. Rod, Sheila and I represent just three of them.  Our hope is that the government will see the folly of cutting nearly $800M from the community health sector.

We call on the government to reconsider this decision.

So – what are these “flexible funds”? What types of initiatives are in for the chop?

Two of the 16 Flexible Funds have been quarantined from the cuts. They are:

Aboriginal and Torres Strait Islander Chronic Disease Fund, and the

Note, however, that Aboriginal and Torres Strait Islander services as a whole have not been exempted from the cuts, only those that fall under the specific Chronic Disease Fund measure.

The cuts hit areas in health that ought to be a priority.

Under threat are areas like chronic disease prevention, health protection, alcohol and other drug treatment and some rural health sector funds, as well as initiatives in key areas such as health workforce, capacity building, communicable disease and health surveillance.

Some people believe ‘prevention is better than cure’. These cuts suggest the opposite.

Let me highlight some of the under-threat funds to illustrate the point.

One of the flexible funds supports better outcomes for individuals and communities affected by alcohol and drug misuse including for Aboriginal and Torres Strait Islander Peoples.

Do not miss the irony! This is the sort of money that should be used to include treatment of ICE.

At the same time as cutting the best part of $800million the government looks for accolades by committing an additional $20million to the National Drugs Campaign. This marketing campaign excludes any funding for treatment.

Considering their rhetoric on ICE, you might think that the Government would be considering expanding its investment in the substance use treatment sector.

Sheila McHale will elaborate on what this will mean for affected families and communities.

The Communicable Disease Fund is for prevention of blood borne viruses and sexually transmissible infections and promoting appropriate treatment and management.

Given the recent Federal Parliamentary Inquiry into Hepatitis C in Australia – and its recommendations for an increased focus on prevention, increased testing and increased treatment initiatives – you might think that this Fund would have been quarantined from the application of funding cuts.

Half a million Australians are now living with chronic hepatitis B and C and combined. These two viral infections are fuelling rising rates of serious liver disease, including liver cirrhosis, liver failure and liver cancer. This is now the fastest increasing cause of cancer death in Australia. You would think this would be a priority for government.

The Health Surveillance Fund is also in the firing line. How can we expect a quality health system without effective implementation and management of the government’s key surveillance and monitoring priorities?

Many of the funds focus on prevention.   This focus is about improved detection, prevention and awareness of communicable and chronic diseases. It is about information and analysis to assess the efficacy of population health programs. The aim is evidence-based preventive health policy in Australia.

The experience from Greece illustrates very starkly the dangers of cutting prevention. Following austerity measures in that country HIV infection leapt by 52% in just four months between January and May 2011. Imagine the long term anguish and the costs.

The Health Workforce Fund is another in line for cuts. Its primary objective is to strengthen the capacity of the health workforce to deliver high quality care by, increasing the supply of health workers, ensuring a capable and qualified workforce, addressing health workforce shortages in aboriginal communities as well as regional, rural and remote Australia.

Rod will speak more about the impact of funding cuts on the rural health workforce.

Let’s be clear. Not all services financed under the flexible funds will be cut. The trouble is that with just a bit over a month to go in some cases and a maximum of seven months for the rest – no-one knows where the chop will fall.

The Health System Capacity Development Fund is also under threat. This Fund supports primary and population health care, including women’s health, children’s health and men’s health. It provides assistance to consumer, rural, student, professional or other organisations. Some of the organisations currently receiving this funding include my own Public Health Association of Australia, the Consumer’s Health Forum and Mental Health Australia.

Chronic disease is generally regarded within health as the single greatest challenge for our health system. And yet the Chronic Disease Prevention Fund is also under threat.

This fund is designed to improve practice in prevention, detection, treatment and management of chronic disease, to reduce the incidence of preventable mortality and morbidity, to maximise the wellbeing and quality of life and to reduce the pressure on the health and hospital system including aged care.

The Government has stated priorities around reducing the burden of chronic disease, promoting healthy lifestyles and addressing the ‘obesity epidemic’. Estimated direct health-care costs for chronic disease are upwards of $27 billion and for obesity $58.2 billion per annum. You might think that this Fund could see a comprehensive return on investment and would be immune from funding cuts.

It is ironic that the first victim of the cuts to the Health Flexible Funds was the CO-OPS Obesity Prevention Network, which reached at least 1.4 million Australians each year, when its funding was not renewed on 30 June this year.

“Not a cut” they said, just “not renewed”. This is a smoke and mirrors argument. All flexible funds are on contracts. Don’t be fooled. Ending them is simply a cut.

The $800m cut to the Health Flexible Funds does not sit in isolation. A total of $1.7 billion in cuts in health were flagged over the next 4 years. And $50 billion from the public hospital system over ten years.

These cuts come hot on the heels of previously slashed funding of national peak bodies and other agencies within the health sector. The Alcohol and other Drugs Council of Australia and the Rural Health Education Foundation were de-funded and closed in early 2014. The Australian National Preventive Health Agency, Australian Medicare Local Alliance and Health Workforce Australia have all also met the same fate over the same time period.

Our organisations believe that we have now reached the tipping point. If we are to meet the key challenges in public health we should work as partners – partners with our NGO colleagues, partners across health and partners with local, Territory, State and Federal governments.

Presenting a roadmap for health reform