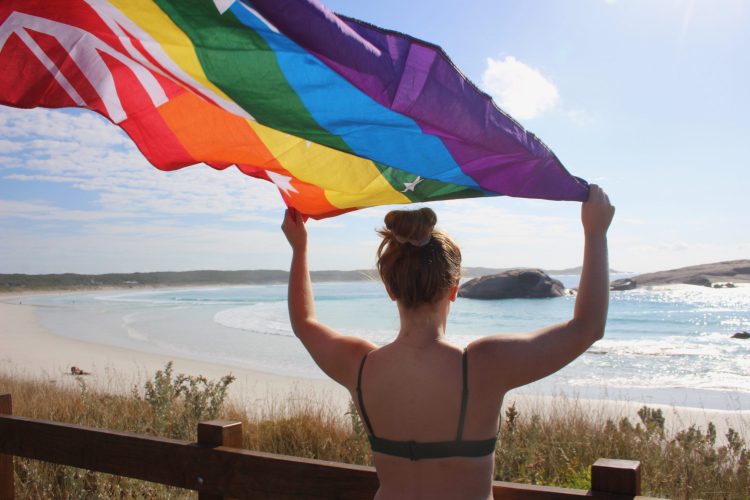 Regional Rainbows – creating visibility and inclusion, one town at a time

Regional Rainbows is a new initiative in Western Australia that aims to increase visibility and inclusion for LGBTIQA+ people living outside of major metropolitan centres, according to founder and health advocate Danny Della Vedova.

The first step has been to approach local businesses in Esperance in the State’s south, and invite them to display a locally designed Regional Rainbows pride sticker on their window.

“We hope to create visibility and to indicate safe and inclusive places in the community for LGBTIQA+ people,” Della Vedova writes below.

This week, he is guest tweeting for @WePublicHealth, so make sure to follow him there – as well as at @DanDellaVedova.

There is no doubt Australia has made some progress in LGBTIQA+ visibility and inclusion, particularly in our capital cities. A challenge that remains is how to extend this necessary progress to regional and rural areas to ensure that all the LGBTIQA+ people, regardless of where they live, can experience the same levels of visibility and inclusion.

The WA Department of Health’s LGBTI 2019 – 2024 Health Strategy identified that increased support for LGBTIQA+ people living in rural and remote locations should be a long-term priority. The strategy also identified that there’s a need to increase our research knowledge on the health and wellbeing needs of LGBTIQA+ populations living in WA. This is especially crucial to help us understand the disparity of LGBTIQA+ mental health outcomes in urban versus regional and rural areas.

The latest 2020 snapshot of mental health by the National LGBTI Health Alliance found that compared to the general population, LGBTIQA+ people are twice as likely to be diagnosed and treated for mental health disorders than the general population. Alarmingly, LGBTIQA+ young people aged 16 to 27 are 5 – 11 times more likely to have attempted suicide with almost 50 percent of transgender people aged 14 to 25 surveyed already having attempted suicide.

What’s most shocking about these statistics is that they are likely to be an underestimation; LGBTIQA+ people who take their own life prior to “coming out” would not be included in these statistics, their deaths being mis-attributed as occurring in the “general” population.

Mental health services outside of urban areas are already limited and LGBTIQA+ people in regional and rural areas face additional challenges, such as being able to access inclusive and affirming care. The 2020 snapshot of mental health found that 71 percent of LGBTIQA+ people aged 16 to 27 did not use a crisis support service during their most recent personal or mental health crisis, with 33 percent indicating that this was due to anticipated discrimination.

Discrimination, stigma, violence, and social exclusion continue to drive the huge health and social disparities for the LGBTIQA+ community. Stay-at-home restrictions related to COVID-19 mean they may be confined to hostile environments with unsupportive family members or housemates that may increase their exposure to domestic violence and mental health issues.

Access to services and establishing community networks and support that involve other LGBTIQA+ people may be more challenging outside of the city. The 2020 Private Lives 3 survey found that participants residing in inner suburban locations reported lower levels of psychological distress, suicidal ideation and attempts and better self-rated health than participants in outer suburban, regional or rural areas.

The importance of being visible

As a member of the LGBTIQA+ community raised on the southern coast of Western Australia, I know how isolating, confusing and challenging growing up in regional WA can be.

My hometown is in the regional electoral division of O’Connor – which had the lowest ‘Yes’ vote for Marriage Equality in Western Australia – carrying a message of exclusion to LGBTIQA+ people of the area.

In my conversations with other LGBTIQA+ people from various rural and regional backgrounds around Australia, it has become increasingly apparent that the lack of LGBTIQA+ visibility in regional towns was a major factor that unnecessarily prolonged the time it took for people to ‘come out’.

It wasn’t until I moved to the city (first Perth and then Sydney) that I was able to find the community networks and support I needed to be able to understand and accept my sexuality and finally ‘come out’. I’m acutely aware that not everyone will have the same opportunity I did to relocate to have the anonymity of a new city to have an experience like this and, quite frankly, why should they have to?

Visibility is central to creating an environment that welcomes, accepts and celebrates LGBTIQA+ people. I know that having more LGBTIQA+ visibility in my hometown growing up would have helped me to identify role models that would have aided my understanding of my own identity.

It was for this very reason that through the PHAIWA mentoring program I recently launched a passion project called Regional Rainbows in Esperance, with the aim of making my hometown a safer, more inclusive place for LGBTIQA+ people.

Our first step has been to approach local businesses and inviting them to display a locally designed Regional Rainbows pride sticker on their window. We hope to create visibility and to indicate safe and inclusive places in the community for LGBTIQA+ people.

As this project is unfunded, we hope to secure funding to extend LGBTIQA+ visibility and the positive message this will have to other regional towns.

The vision of Regional Rainbows is that by creating a foundation of visibility, opportunities for LGBTIQA+ people, their families, and allies to come together can be identified organically.

These opportunities could be as simple as a local cafe with a Regional Rainbows sticker becoming the preferred meeting place of an LGBTIQA+ book club.

Of course, we’re dreaming big with hopes that this initiative may one day grow into having Esperance’s own pride event as seen in other parts of the WA, such as the recent Albany and Broome pride events.

Through initiatives like Regional Rainbows, we can – one regional town at a time – increase visibility, awareness, and educate our communities so that everyone, no matter where they may live, can feel that all parts of who they are, are welcome, valid and accepted.

Danny Della Vedova is a Population Health graduate from UWA and a mentee in the PHAIWA mentoring program. He is a passionate advocate for the LGBTIQA+ community with a special interest in mental, youth and regional health.