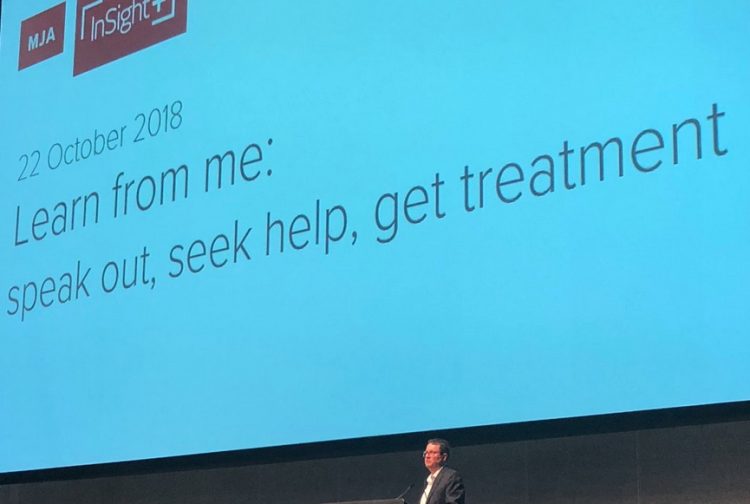 As a group who had sacrificed so much – sometimes everything – for their profession, it was time for doctors to start investing in themselves, or patients would suffer.

These were the stirring sentiments shared in a powerful, intensely personal session at the recent Royal Australian and New Zealand College of Obstetricians and Gynaecologists’ (RANZCOG) annual scientific meeting (ASM) in Melbourne, which put the mental health of doctors in the spotlight.

AFL Hall of Famer Merv Keane received a standing ovation after an emotional address about his daughter, Emily, who died in 2017, aged 36, following a protracted battle with alcohol addiction while training as a women’s health specialist with RANZCOG.

Little more than a month later, Merv’s wife Kaye took her own life.

“Our daughter Emily Keane was our gift to the world,” Keane told a packed auditorium of more than 1,000 delegates to the ASM. “More than a beautiful girl, she was a brilliant doctor. It was her personality to light up a room and a birthing suite.”

Keane, who had a storied career with the Richmond Tigers, shared the anguish of watching his daughter’s life and her drinking spiral out of control.

Fearing for her patients, he began following her to work at Melbourne’s Royal Women’s Hospital where, from across the road, he would witness her sneak out to a nearby bottleshop and purchase one, sometimes two bottles of vodka every day.

He was ultimately forced to report her to the Medical Board, resulting in restrictions on her registration as she further deteriorated, venturing out of bed only to drink and spending her days weeping.

“She would sometimes get better, but not for long,” said Keane. “In the end Emily couldn’t open her mail, do her shopping, pay her bills. Death was the only way she could find peace.”

“Emily didn’t deserve this fate. She deserved so much more.” 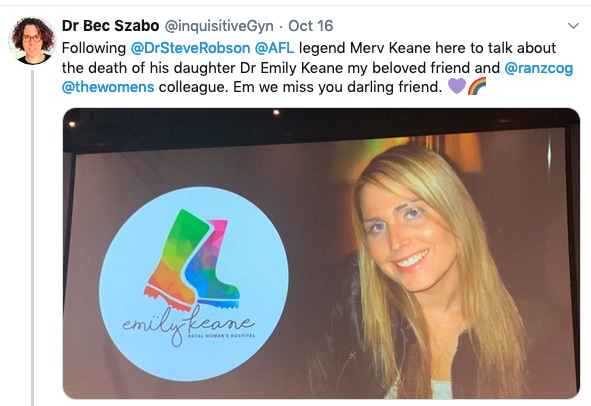 While Emily’s issues were not exclusively linked to the pressures of specialist training, Keane said the intensity of the work and the personal attributes that had attracted her – and many of her colleagues – to a medical career, had played a role.

He had watched as his daughter and her fellow trainees became consumed by “bullying, stress, long hours, double shifts”, completely losing sight of the women and babies in their care. Their high-achieving personalities made it difficult for medical professionals to be vulnerable, he said, which was unsurprising but also meant it was difficult for their families to offer support.

“You have made enormous sacrifices and you must invest in yourselves,” Keane told RANZCOG delegates, many of whom were tearful as he spoke.

“Something, somewhere, somehow has let us down.”

While competition was healthy, Keane said things “can and do go wrong” and “none of us are bulletproof; we need to put our arms around each other.”

He also stressed the “power of proximity”, saying that those closest to the issues – not just the trainees but also those in positions of authority, including at RANZCOG – needed to acknowledge there were systemic and cultural problems at play, and to push for change.

“What is it about this carnage?” asked an emotional Keane. “Is it blame, or is it change?”

See this five-page summary of tweets from Keane’s presentation.

Former RANZCOG president Steve Robson had set the scene for Keane’s keynote with an address examining the evidence for and imperative of addressing mental health in the medical profession.

Robson became somewhat of a spokesperson on the issue after a piece he wrote for the MJA last year about his suicide attempt as a junior doctor went viral, partly due to a heartfelt response written by fellow intern Kate Tree.

Robson told RANZCOG colleagues he had been prompted to write the piece during the pelvic mesh scandal when, as College president and very much the public face of the profession, he was on the receiving end of a great deal of anger, feelings of betrayal from patients and grief that began to take both a personal and professional toll.

After he was reported to AHPRA over one particular case (ultimately dismissed), Robson said he began to reflect on how significantly physician wellbeing could impact patients.

“Burnout, untreated mental health problems and other illnesses carry a considerable risk of imparting adverse outcomes on the patients for whom we care,” Robson said, adding that an “evolving body of evidence” supported this claim. 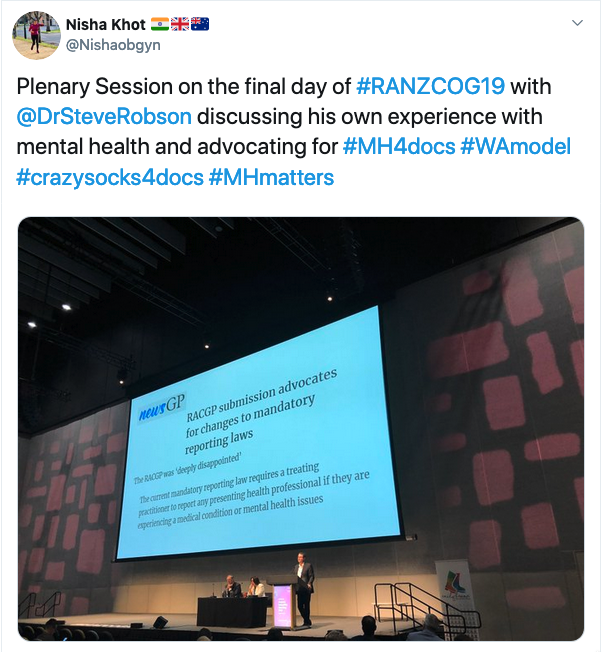 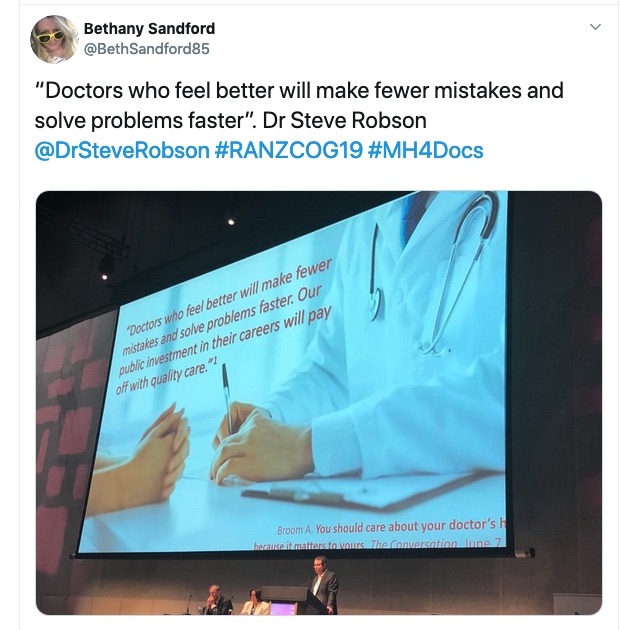 Robson shared startling Australian data showing half of all doctors met the criteria for mental health problems like anxiety and depression or burnout, as well as overseas studies looking specifically at obstetrics and gynaecology and the prevalence of affective disorders, emotional exhaustion and suicidal ideation (a staggering 13 percent in one American study).

This predisposition was seen in medical graduates before they even started medical school, Robson added, questioning whether universities (and in their turn, specialist colleges) were selecting for personality types that were particularly vulnerable.

While all medical professionals were held to the highest standards, worked in an unremittingly intense emotional environment and were less likely to seek help and support for psychological problems, Robson said there were unique pressures for obstetricians and gynaecologists.

These included the unpredictability and length of work hours and the need to make snap decisions with very high stakes.

In Australia, Robson said mandatory reporting requirements posed a particularly significant barrier to disclosure and help-seeking for mental health issues, with a “cascade” of consequences including conditions on registration and practice and difficulties securing professional insurance.

See this summary of tweets from Robson’s presentation, and also the article mentioned below is here. 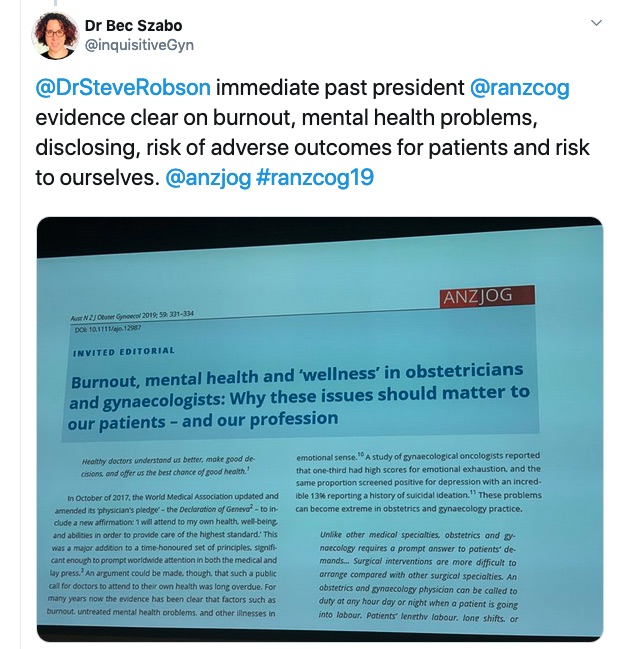 Vijay Roach, current president of RANZCOG, told delegates the College had failed trainees in the past with punitive and unsupportive approaches to mental health, and agreed that the organisation and its leadership had an important role to play.

“We want to grow trainees who feel supported, understood, cared for and empowered. We want RANZCOG to be a family that stands by you,” said Roach.

Roach told Keane the College also grieved Emily’s loss and stood with him in his determination that her death not be in vain.

He rejected approaches focused on the ‘resilience’ of trainees, an emphasis he said put the onus on a vulnerable individual while letting systems off the hook.

“I think that resilience is a term that we impose on other people so we can mask their suffering and make it easier for the rest of us,” said Roach, who has previously spoken out about his personal experience of PTSD and postnatal depression.

Sharing his own struggles with imposter syndrome and his personal relationships, Roach urged his colleagues to leave their inner perfectionist behind and “accept your frailties, your vulnerabilities, ask for and accept help”.

Instead of resilience, Roach called for a kind of radical acceptance from his colleagues that their profession was much more than a job, it was a vocation “and there are parts of it we cannot change”.

See this summary of tweets from Roach’s presentation.

Keane’s talk was titled ‘Emily’s Gumboots’, the name of an advocacy and training initiative he has launched on the welfare and wellbeing of junior doctors.

Emily was renowned at The Women’s for wearing fluorescent gumboots in the operating theatre, and Keane is now selling pairs of these boots to raise funds for his project.

He has already collaborated with RANZCOG’s Training Support Unit to develop a workshop for O&G trainees, using Emily’s story, and has delivered talks at The Women’s, Goulburn Valley Health and Eastern Health. 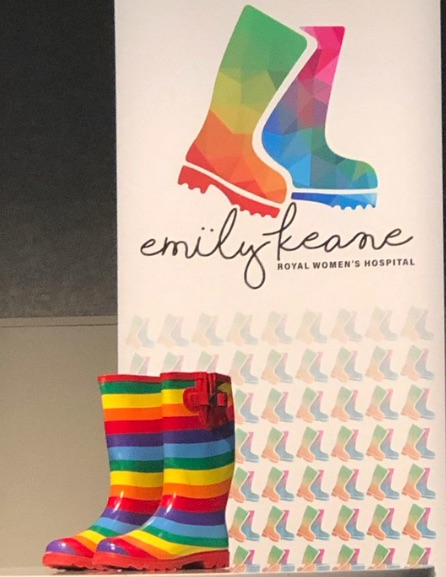 Watch our interview with Keane

• Read our previous coverage of #MH4Docs, including at the Royal Australian and New Zealand College of Psychiatrists here and the Australasian College for Emergency Medicine here.

Reach out for support

This story is the latest in our #RANZCOG19 series from Amy Coopes, who attended the 2019 RANZCOG ASM in Melbourne for the Croakey Conference News Service. Bookmark this link for the rest of our stories.