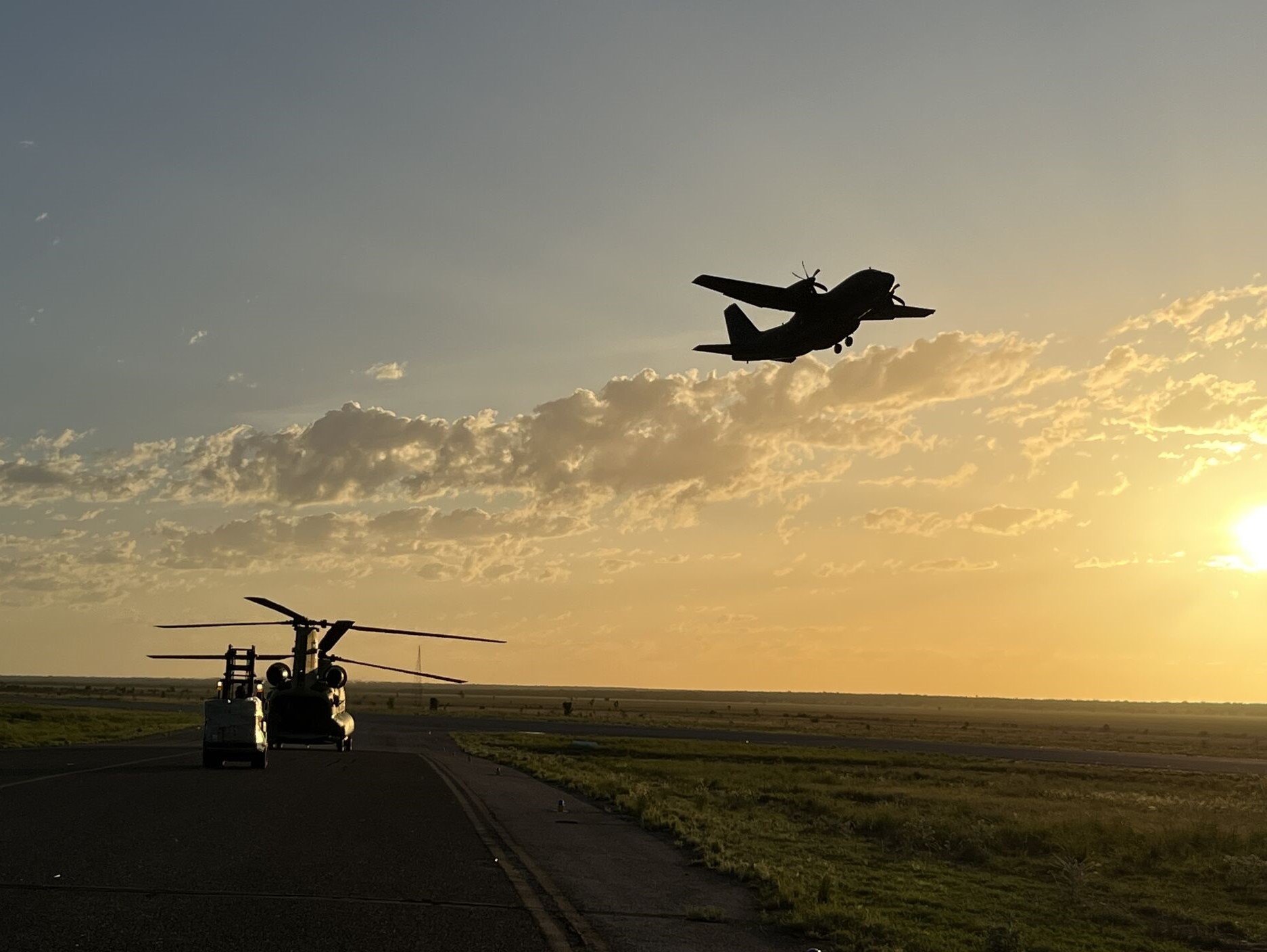 Feeling the impacts of climate disruption. During recent Kimberley floods, supplies are unloaded from an Army Chinook as a C27 Spartan takes off. Credit: Mark Anderson.

A range of public health concerns, including a lack of planning to help communities adapt to climate disruption, could be addressed through an Indigenous Voice to Parliament, writes Croakey editor Jade Bradford.

As the world witnessed the devastation left by the recent flood disaster in the Kimberley region of Western Australia, RMIT Urban Researcher Thami Croeser provided examples of how countries are adapting to climate change.

In his article for The Conversation last week, Croeser shared how some other countries are cooling their cities and preventing flooding, and suggested that preparation for climate change will require our cities to invest in climate adaptation.

Support is needed in not only urban areas, but also regional and remote areas. As we know, this new year began with major floods in three states including Western Australia, Queensland and South Australia. Floods are becoming more frequent, just as scientists have predicted and we are being told this will continue.

We also know that those who are facing social and economic challenges are the ones who will suffer the impacts of climate change the most. Many Aboriginal community members impacted by the Kimberley floods were uninsured and are homeless in a region that already struggled with housing shortages.

The Prime Minister labelling the Kimberley floods a ‘one in 100-year flood,’ which has been repeated by many media outlets, is inaccurate. Science has long told us these climate-related disasters are set to happen more frequently and will not be isolated incidents.

Meanwhile, Australia is trailing behind in its targets towards achieving net zero by 2050 and we are also behind in developing policies to keep global warming at 1.5 degrees. The current absence of First Nations voices when it comes to addressing issues such as climate change is making the impacts much worse for First Nations communities.

In 2016, 30 percent of Aboriginal and Torres Strait Islander people families were living in poverty. This statistic doubled in remote communities and could possibly be even higher as not all incomes have been declared.

Many local governments throughout the country do not have much needed climate adaptation plans in place. Without these plans, areas around Australia are not prepared for disasters like what we have seen with the floods and recent bush fires.

Essentially, we are leaving communities to be sitting ducks, waiting for a disaster to strike before initiating any response. People are suffering the consequences of governments’ inaction.

An Indigenous Voice to Parliament will include Aboriginal and Torres Strait Islander voices in policy making, including policies to address climate change. This will empower First Nations people to protect Country through first law.

It has been reported that Invasion Day rallies in Sydney, Melbourne and Brisbane will protest against the Voice, calling for a treaty to take priority. Some First Nations community members are concerned about the Voice taking away opportunity for a Treaty.

Professor Megan Davis told The Guardian this week that a Voice to Parliament will not cede sovereignty. She said the only way sovereignty would be ceded is through a Treaty.

Greens Senator Lidia Thorpe wrote an opinion piece published by NITV on Tuesday calling for a Treaty, citing that the Voice will be subservient to the government.

There are, however, Treaty negotiations currently underway in South Australia, Victoria, Queensland and the Northern Territory. What we know from observing the processes towards establishing treaties in other countries like the United States, Canada and Aotearoa/New Zealand is that they can take decades to negotiate.

This week we also saw Opposition Leader Peter Dutton and Shadow Attorney General Julian Leeser call for more details on the Voice, warning that the Government will risk losing the Opposition’s support.

First Nations leader and activist Noel Pearson told The Guardian that he was very concerned over the Coalition’s ‘spoiling game’ and that chances for reconciliation were being put at stake. Pearson also pointed out the Morrison Government commissioned the report into the Indigenous Voice Co-design Process.

While the Opposition had an opportunity to draft details on the Voice when it was in power, Labor has promised to release more information on the Voice proposal in the next month or so.

The referendum process usually requires Australians to first vote on the proposed changes to the constitution. If successful, it would be referred to Parliament to later decide on the legislation.

As Davis has said, the continued creation and abolition of Indigenous representative bodies has been a lingering problem in Australian Indigenous affairs.

Writing in The Age, Dr Hannah McGlade also queried the reasons behind Opposition Leader Peter Dutton’s scepticism about the Voice.

“A Voice to parliament protected by the Constitution can’t be abolished at the whim of conservative governments who may think they ‘know best’,” she said. “It’s a solid proposal for reform. That’s why we are witnessing a vocal No campaign, with Dutton demanding details of the Voice, which he already has.

This week we have seen reports of the increasing crime rates in the Northern Territory, with a Parliamentary inquiry examining the sunsetting of the Stronger Futures legislation. As Croakey has reported this week, Aboriginal health leaders and community organisations have been calling since last year for alcohol regulations to stay in place.

The Voice to Parliament empowers First Nations people to share solutions from their lived experiences on the issues that are impacting them. The referendum is set to be held within the second half of 2023. If it is successful, the permanent presence of an advisory body with Aboriginal and Torres Strait Islander members can be implemented.

• Jade Bradford is a proud descendent of the Ballardong Noongar people in Western Australia and an editor at Croakey.