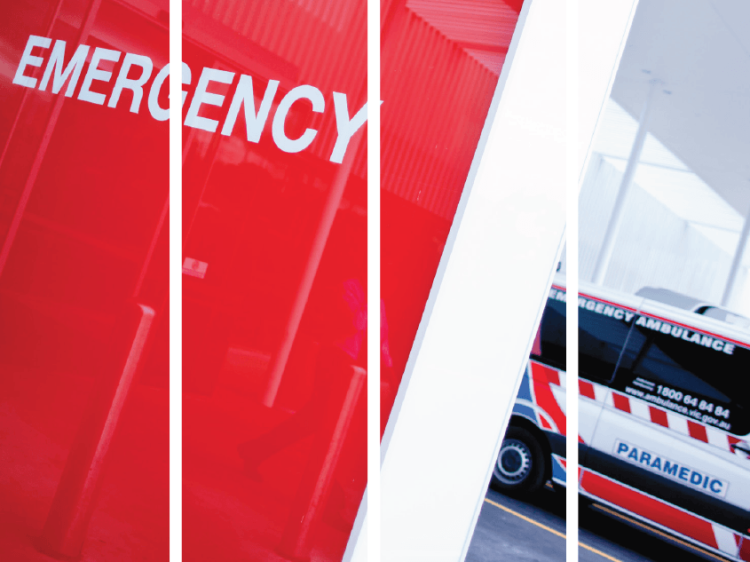 Detail from cover of a new report, The Long Wait.

The Morrison Government has announced it will establish a Productivity Commission Inquiry “into the role of mental health in the Australian economy and the best ways to support and improve national mental wellbeing”.

News of the inquiry comes ahead of a summit convened by the Australasian College for Emergency Medicine (ACEM) aimed at shaping a new national agenda for how Emergency Departments deal with mental health.

The ACEM has also released a new report that provides damning evidence and testimony about a “system under stress”.

Croakey journalist Marie McInerney will cover the Mental Health in the Emergency Department Summit on Tuesday, 16 October for the Croakey Conference News Service.

The preview article below reveals the distress experienced by many people when they attend an Emergency Department environment during a mental health crisis.

Bright lights that never dim. Constant noise. Yelling and screaming. The arrival of police and paramedics, the shadow or threat of violence. Children in pain, others in crisis. Thin walls or curtains that mean others get to overhear the rawest of feelings and actions. And many hours of waiting, in acute distress.

For Renai Searle, presenting with a mental health crisis to the Emergency Department of a busy hospital has too often been a brutal and bruising experience that has served only to exacerbate her pain and validate her sense of worthlessness.

Her experiences include having to wait for up to 18 hours for a decision on her treatment from a specialist care team, only to be discharged because there are not enough beds or her symptoms no longer appear bad enough for admission because she has been medicated during the wait.

The crisis-driven physical environment of the Emergency Department only adds to the distress. Searle told Croakey:

Even if I don’t know people, everyone can hear through those paper thin walls so I feel silenced.

If you’re “lucky” enough to be put in an isolation booth, then no, you can’t be heard but you feel like an animal in a zoo. The lights are on, the noise is loud, and for me in distress, that’s all very overwhelming.

All of those things can be very triggering for people and make you feel unsafe in a place you are told to go to (in order) to keep safe.”

Searle is a project coordinator at Consumers of Mental Health Western Australia (CoMHWA) and will be a panellist at next week’s Mental Health in the Emergency Department Summit to be hosted by the Australasian College for Emergency Medicine (ACEM).

Diagnosed with bipolar I, obsessive compulsive disorder (OCD), and complex post-traumatic stress, she has been one of a quarter of a million Australians each year who seek help for mental health care at an Emergency Department.

Her experiences over many years are loudly echoed in a report – The Long Wait: an analysis of mental health presentations to Australian emergency departments, released today by ACEM ahead of the Summit.

“An Emergency Department is not a fun place for anyone,” Searle said.

“But we need a way for those who are already experiencing high levels of distress to not be further traumatised by their experience (of seeking help).”

All of that “just validates all of my feelings of worthlessness,” she says.

The report says it is “difficult to imagine an environment less conducive than a busy Emergency Department for the extended treatment of people with severe mental illness, where long stays are associated with suboptimal treatment like restraint, seclusion and lengthy periods of sedation”.

A sector under “great stress”

Its findings include that patients presenting to Emergency Departments with mental health problems:

ACEM said these data suggest “our health system is failing to meet the needs of a large number of people who seek help from EDs for serious mental and behavioural conditions”.

Judkins said the Summit will bring together more than 150 consumers, clinicians and policy and funding participants and will aim to set the agenda for policy reform.

“These are problems that emergency doctors cannot solve alone: they reflect a sector under great stress and lack of a plan for system-wide development.”

Below, see an AIHW depiction of patient progress through the ED.

“No-one wins, least of all the sufferer”

Accompanying each section of the data analysis in the Long Wait report are powerful anonymous vignettes that comment on the major failings identified by people seeking help for their mental health crises, their families and carers, and the ED clinicians working in the system.

They describe a system that is, as one says, “increasingly reliant on police, ambulances, hospitals and the justice system to provide frontline care for people with mental health issues.”

For patients with acute mental health issues, especially when they are in a state of high arousal, these factors are compounded… patients are often paranoid, confused or suicidal. They need a calm and private environment, with a clear plan and good communication.

When patients are delayed in ED for long periods, they sometimes become angry and upset to the point where they require chemical sedation for their own safety, and the safety of other patients and staff in the ED. Chemical sedation carries risk – side effects and cardiorespiratory depression – there have been deaths from chemical sedation in ED.

…the biggest problem with this is that it is not fair on patients – our environment and processes get them to this point – this is not acceptable and we need to change the system.”

In relation to the high proportion of mental health patients who are brought to hospital by police, a parent talks about the fear that a loved one might lash out during the journey or on arrival at the hospital, which might culminate in a mandatory prison sentence for assaulting a police officer. “Nobody wins, least of all the sufferer,” the parent says.

Also reflecting on how patients arrive in Emergency, another clinician talks about being struck over the years by the unequal access to care that socioeconomic status delivers in our system, and the implications:

If a teenager starts behaving oddly in an upper middle class home, his parents are likely to call their GP, an ambulance, or take him to see a private psychologist. The parents of the same teenager in a poorer household tend to call the police.

Whether a person with mental health issues enters via the health or forensic system colours the way they are treated for the rest of their life.

We need to have a clear and adequately resourced process which allows all patients with acute mental health issues to access health care to remove this source of discrimination.”

Another parent describes waiting in an ED with a person needing acute mental health care as “akin to being unexpectedly flung into a war zone”.

Another clinician talks powerfully about how the system let down a young Aboriginal man who died by suicide after having had to stay in Emergency for two days because of a lack of mental health beds. The clinician said:

I’ll never forget the anguish on his father’s face when he was given the news of his son’s death. We often talk about not having beds leading to deaths, but here it was.

A stark reminder that we are dealing with people’s lives, even though I feel that this message is often not really heard or really understood by those people who have the power to change the system that failed this young man, his family and his community.”

Renai Searle’s story overlaps many of those raised in the report though it comes with a strong message of recovery. She said:

I was told I would never work, this is my ‘new normal’, I would be on medication for the rest of my life.

My recovery goals were basically to be able to leave the house on my own and relieve some of the dependency on my partner, but my dreams of study or work were probably a bit far-fetched.”

Now she has a fulltime job, coordinating the CoMHWA’s My Medicines & Me project to support people to manage their mental health medications, and recently married.

She has no wish to criticise the staff of Emergency Departments but says her message to the ACEM Summit will be the need to “revolutionise the system” in a way that is strongly informed by people with diverse lived experience.

Searle says that, while she understands that the Emergency Department’s role is primarily triage, if it is to be a place of referral – “given that mental health is not 9-5” – then changes are needed to Emergency Department environments and processes to “minimise the harm” they currently cause.

The most positive care she has seen was that of a close family friend who was put into one of Western Australia’s relatively new mental health observation areas, custom built units near three Emergency Departments that provide “a quieter space – the lights go off, there’s more privacy and a care team on site”.

She will also highlight the “postcode lottery”, where access to specialist mental health services often depends on the postcode in which someone lives.

Searle says that despite her horrific experiences with Emergency Department, she considers herself “one of the lucky ones”.

For me, some things like the yelling and screaming (that happens in EDs) can make me shrink down, be traumatised.

But for friends I’ve supported who have had a lot of negative experiences with police, for example, or a history of systemic racism, the exposure to that in the Emergency Department environment increases the stress infinitely.

I think the whole system needs an overhaul.”

• Marie McInerney will cover the Mental Health in the Emergency Department Summit on Tuesday, 16 October for the Croakey Conference News Service. On Twitter, follow #MHED18.

PrevPreviousAs new IPCC report spotlights urgent need for climate action, what about Queensland’s “elephant in the room”?
NextOur latest news on public interest journalism and the development of #CroakeyGONext