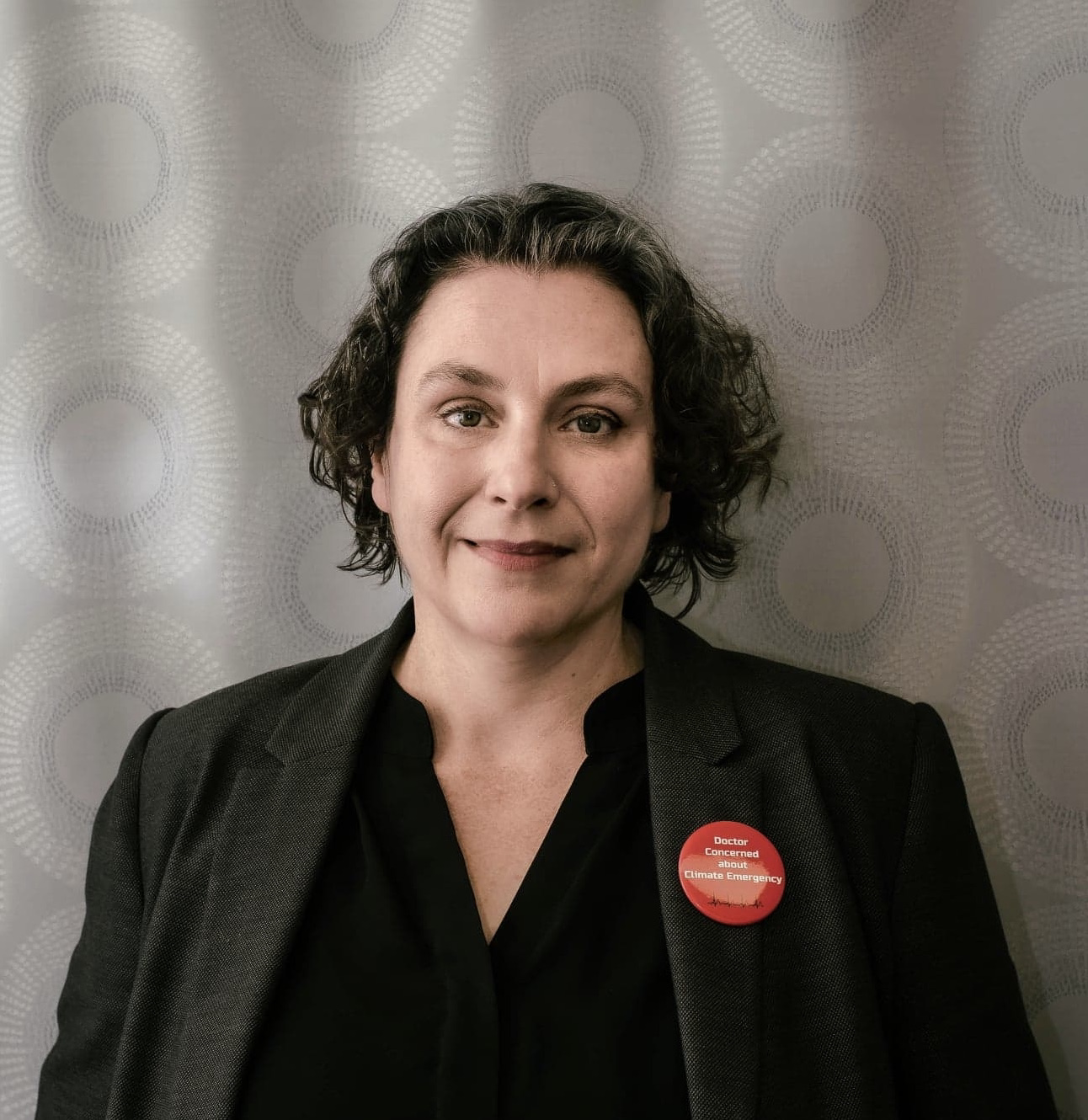 Introduction by Croakey: Work is needed to ensure Australia’s health system is much better prepared to cope with the impacts of climate change, including heat stress and heat-related health problems, Health and Aged Care Minister Mark Butler told doctors this week.

He said this was one of three areas of focus for a planned national climate and health strategy, now under development as an pre-election commitment by Labor.

The urgency of this issue has been underscored by recent reports that two leading hospitals in the United Kingdom have had to cancel operations, postpone appointments and divert seriously ill patients for the past three weeks after their computers crashed at the height of a recent heatwave.

Butler told a webinar on 9 August hosted by the Australian Medical Association and Doctors for the Environment Australia that another area of focus for the strategy would be reducing healthcare’s greenhouse gas emissions.

The third area of focus, which Butler said he was “really excited about, as a long term advocate of climate action”, is to maximise the synergies between good public health policy and good climate policy.

Citing the late Professor Tony McMichael, the Minister noted that clean energy policy was good for health by reducing particulate pollution, just as efforts to support active transport were good for both public health and climate policy.

“As someone who gave up eating meat many years ago because of climate, we know that good dietary policy is not only good for the planet but for individuals taking that decision, if they choose, it’s also good for public health,” he said.

Butler said he was hopeful of making progress on declaring climate change a national health priority following promising talks with state and territory ministerial colleagues. He said it was important that climate communications focused on the health benefits of climate action, as another “weapon” that could be brought to winning the “climate policy war”.

Given the Minister’s evident concern for climate and health, it is puzzling that the new Strengthening Medicare Taskforce, which he chairs, has not identified these as one of the focus areas for its work.

Dr Kate Wylie, GP and a Board Member of Doctors for the Environment Australia, has some suggestions below for how the Taskforce could address climate concerns.

The Strengthening Medicare Taskforce, established to “identify the highest priority areas for primary care”, is a welcome and much needed government initiative. Our health system is close to breaking, and as a practising GP I can see the strain and the detrimental impacts on patient care.

General practices are closing all across the country, the GP shortage means Australians can’t access healthcare and healthcare workers are worn down after the two years hard slog with the COVID pandemic.

We need reform and we need it urgently.

But there is a glaring omission in the focus areas outlined for the Taskforce. The climate health emergency has not been mentioned in any official communications, including last week’s Communiqué and the Labor Party’s Taskforce policy webpage.

This is despite the Government’s pre-election commitment to developing a National Climate Health Strategy and the increasingly obvious effects of climate change on our health.

From bushfires and smoke inhalation to catastrophic floods and infectious diseases, Australians’ health is being harmed by climate change. We are seeing impacts on our food and water supply and the breakdown of infrastructure that extreme weather events brings. We are seeing the mental health effects, with eco anxiety and climate grief becoming increasingly seen in clinical practice.

Climate change is the biggest health problem facing humanity and for the Taskforce to ignore it would be shirking its responsibility and a missed opportunity.

Healthcare is responsible for seven percent of Australia’s domestic carbon footprint. The Taskforce represents a golden opportunity to reduce that number by incorporating carbon mitigation into the recommendations of the Taskforce. This would help the Government reach its 43 percent 2030 emission reduction target and demonstrate its commitment to carbon action.

Doctors are concerned about climate change. DEA and the AMA have jointly called for a reduction of healthcare emissions by 80 percent by 2030 and the establishment of a Sustainable Health Care unit. Multiple medical colleges have declared a climate health emergency, including the RACGP and ACRRM, who sit on the Taskforce.

There are multiple things that the Taskforce should do that would both improve primary care and act on climate change.

The Taskforce should support general practice, not only as the backbone of our health care system but also because general practice has a low carbon footprint and reduces emissions.

GPs practise preventative medicine. We keep people well, reducing the burden of chronic diseases like diabetes and cardiovascular disease and their associated carbon footprint. We treat acute presentations before they become serious and life threatening, keeping people out of hospital. We consider the whole person in our patient-centred care, preventing the fragmentation from seeing multiple other specialities.

The Taskforce should prioritise low carbon healthcare. There are many opportunities that it can pursue. These include:

• Encourage healthy lifestyles with diet and exercise programs that improve health and reduce our carbon footprint. For example, choosing active forms of transport like walking and cycling is good for our hearts and lungs and carries no associated carbon emissions.

• Reduce the carbon footprint of pharmaceuticals by: reducing unnecessary prescriptions, thereby reducing the footprint associated with pharmaceutical supply chains and avoiding the harms of polypharmacy; and prioritising pharmaceuticals with a lower carbon footprint that can be used safely for improved patient care. For example, Salbutamol is a metered dose inhaler that uses potent greenhouse gasses as its propellant, many people with asthma will have improved disease control by using preventative medications that do not use these propellants.

• Avoid unnecessary tests and investigations that do little to improve patient outcomes and thereby avoiding their emissions.

The Taskforce should appreciate that all these examples contribute to good clinical care and are fiscally prudent.

The Taskforce should prepare primary healthcare for the impacts of extreme weather events. Our practices need to be ready to meet natural disasters like floods and fires so that when they hit, we are equipped to help our communities and protect their health. Primary care practitioners need training in disaster management and for this to be considered part of our scope of practice.

Climate change is here. We are currently at 1.2 ℃ of global heating and across the globe the effects are there for all to see. Fires, heatwaves, droughts, floods and storms are all becoming more intense and more damaging to humans, our health and our environment.

The IPCC is ringing the alarm bells loud and clear. There is no time to delay and what we do now makes a big difference to the future of our world.

The Government has a duty of care to include climate mitigation and adaptation in all its actions.

The Strengthening Medicare Taskforce is an opportunity to reform primary care through this lens, improving the healthcare of Australians and to be part of the transformative change that our world so desperately needs.

A code red has been called for humanity. Let’s respond to that code and treat climate change like the health emergency that it is.

• Dr Kate Wylie is a GP who is passionate about climate action to improve health. Based in Adelaide, she volunteers with the RACGPs Climate and Environmental Special Interest Group, is a board member of Doctors for the Environment Australia and facilitates their After Hours webinar series. She founded Climate Medicine, an advocacy project whereby she presents to community groups on the health effects of climate change. In all her work, Dr Wylie applies a medical model to the climate crisis and as such offers a treatment plan for climate change. She seeks to activate her audience so they can become more involved in creating the paradigm shift that we need to combat the climate crisis.

See Croakey’s archive of articles on the Strengthening Medicare Taskforce

PrevPreviousStepping up for breastfeeding: can we make statistics count?
NextEstablishing a Voice to Parliament could be an opportunity for Indigenous Nation Building. Here’s what that meansNext