Introduction by Croakey: The HEAL2022 in-person and virtual Conference, held on Wednesday November 23 and Thursday November 24, had at its heart the desire for “transformational change for environmental, planetary, and human health” and as the program and sessions unfolded, it became apparent that such change was both sorely needed and possible.

Below Marie McInerney reports on the opening plenary of the conference for the Croakey Conference News Service.

In a powerful speech, Professor Anne Poelina set the agenda for much of what was to follow: the need for Aboriginal and Torres Strait Islander and experiences and knowledges to underpin all that we do, as we move forward together in the face of impending climate catastrophe.

Croakey will be publishing further stories from the conference in the coming days, so bookmark #HEAL2022 to follow along.

Australian scientists and researchers have been urged to rise up against “climate chaos”, to recognise Aboriginal and Torres Strait Islander knowledges as the First Law and First Science of the nation and to grow a coalition of hope that challenges the politics of business and unjust invasive development.

Leading Indigenous academic and researcher, Professor Anne Poelina, a Yimardoowarra woman from Mardoowarra/Fitzroy River in Western Australia, issued the rousing call to action at the opening session of this week’s #HEAL2022 conference that is looking to inspire transformational change for environmental, planetary, and human health.

Poelina told the Healthy Environments And Lives (HEAL) Network event, attended online and in state capitals by hundreds of health and climate researchers from across Australia, “For the greater common good of all of us, it cannot be business as usual. We are in climate chaos. We are in climate wars.”

She urged participants to push boundaries but to do so with “love and attention to an ethics of care.”

“And bring the vulnerable with us,” she said  “because we have no other planet but this one.”

What I say to all of us, is that we need to rise up, we need the transformation. If not, Mother Earth will be lonely without the footsteps of human beings”.

Poelina is Co-Chair of Indigenous Studies Nulungu Institute Research at University of Notre Dame and Adjunct Professor at the College of Indigenous Education Futures, Arts and Society at Charles Darwin University.

She has led the way in Australia on the Rights of Nature movement that calls for legal recognitions that ecosystems and natural communities are not merely property that can be owned, but entities that have an independent right to exist and flourish.

That movement has seen Aotearoa/New Zealand bestow legal personhood — a legal entity with “all the rights, powers, duties and liabilities of a legal person” — in 2014 on the Te Urewera national park and, in 2016, on the Whanganui River, the country’s third longest river, recognising it as having its own presence, needs and wellbeing.

Poelina’s work in Australia saw the Martuwarra River of Life listed in 2020 as lead author in a Cambridge University Press article, arguing for “legal recognition within colonial state laws of the Martuwarra as a living ancestral being”.

“Who could have believed that a river could be first author?” she told #HEAL2022.

Poelina’s opening plenary address set the tone for two days of discussions at #HEAL2022 on environmental, planetary, and human health, where Aboriginal and Torres Strait Islander experiences and knowledges, and the ongoing impacts and implications of colonisation, were at the core of discussions, echoed across sessions and disciplines.

Speaking from the lands of the Yawuru and Djukan people in Broome, Poelina introduced herself as “a woman who belongs to the Martuwarra Fitzroy River in the Kimberley region of Western Australia”, describing “a deep relationship, where the river is a living ancestral being,….we dance with it, we cry with it, we have a duty of care to protect it, not just for now, but for generations to come.”

Indigenous people, she said, believe that land, water and people are intrinsically entwined.

We have not walked away from nature.”

Poelina reminded the group that, while Indigenous people have contributed the least to climate change, they bear the greatest impact — acknowledging particularly Torres Strait Islander people who are on the frontline of climate change — and continue to be “confronted with invasive unjust development in a world dominated by the politics of economics”.

This, she said, included efforts to frack the Canning Basin and poorly framed Western Australian laws that permitted Rio Tinto’s 2020 destruction of Juukan Gorge, on the traditional lands of the Puutu Kunti Kurrama and Pinikura people.

The company devastated one of the oldest sites of human occupation in Australia, with 46,000 years of continuous culture, traditions, practices and stories, to make way for iron ore mining.

The Federal Government acknowledged the systemic failures that lay behind that event on Thursday, the day after Poelina’s presentation at #HEAL2022, when it announced that heritage protection laws will be reformed in the wake of Rio Tinto’s sacrilege.

“It is unthinkable that we would ever knowingly destroy Stonehenge, or the Egyptian pyramids, or the Lascaux Caves in France,” Environment Minister Tanya Plibersek told Parliament.

“When the Bamiyan Buddhas were destroyed in Afghanistan, the world was rightly outraged. But that’s precisely what occurred at Juukan Gorge”.

Plibersek made the point that Rio Tinto’s action was “legal desecration”, “not an isolated mistake, or an example of one company going rogue”.

“No laws were broken here,” she said.

Instead , she said, “we had an entire system frustrating the interests of Indigenous history and culture”.

Plibersek pointed to weak state laws, federal legislation that was “confusing, difficult to access and ultimately ineffective”, “partnership agreements signed under gross inequalities of power”, gag clauses that meant the traditional owners were not allowed speak out publicly without permission from Rio Tinto, and “a corporate culture that never took the company’s obligations seriously”.

In contrast, Poelina shared the following definition of First Law with Croakey:

First Law is the law of the land and not of man. It offers a pathway to justice and equity; it incorporates Indigenous lifeways and livelihoods. First Law is told through stories that teach us about values, ethics, code of conduct, and social cohesion. How to live in a civil society – a world of peace, balance and harmony, a world of we, not me in a deep relationship with our non-human kin and everything around us.”

She said her people have a saying, ‘wake up the snake’ that, in the context of climate chaos, means finding ways to wake up the consciousness of the people, to start with individuals and look to the collective.

“So it’s very, very important that we grow collectively this coalition of hope, we need to recognise and value that this ancient wisdom that we’re talking about is First Law, is First Science: Indigenous people are and remain the first scientists, the archaeologists, the anthropologists, the eugenicists,” she said. 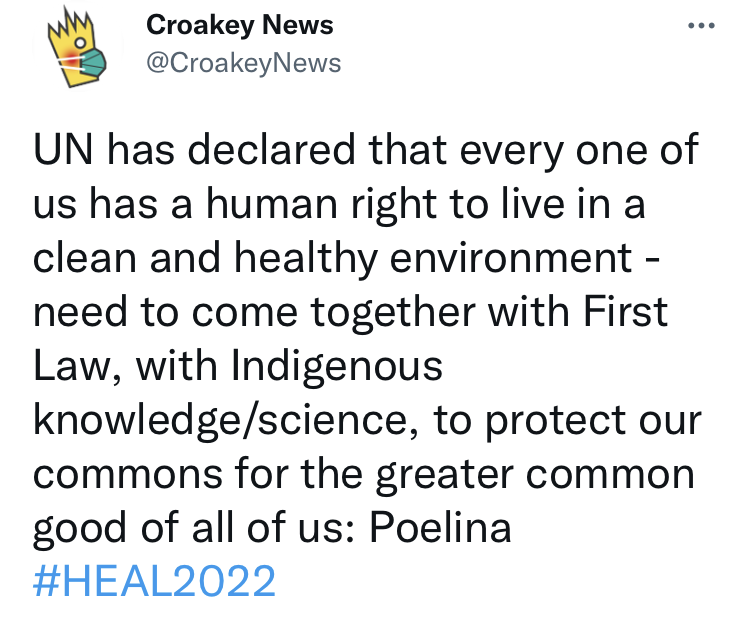 Poelina shared a video at #HEAL2022 that urges scientists “to challenge own practice and redefine our thinking and understanding of what is science, how can we use multiple forms of knowledge making and application to better respond and adapt to climate change”.

Earlier this month, she delivered the Wingarra Djuraliyin: Public Lecture on Indigenous Peoples and Law, where she spoke on similar themes, saying Indigenous wisdom was needed if the planet was to shift from climate chaos to “a climate chance”. (You can watch it in full here). 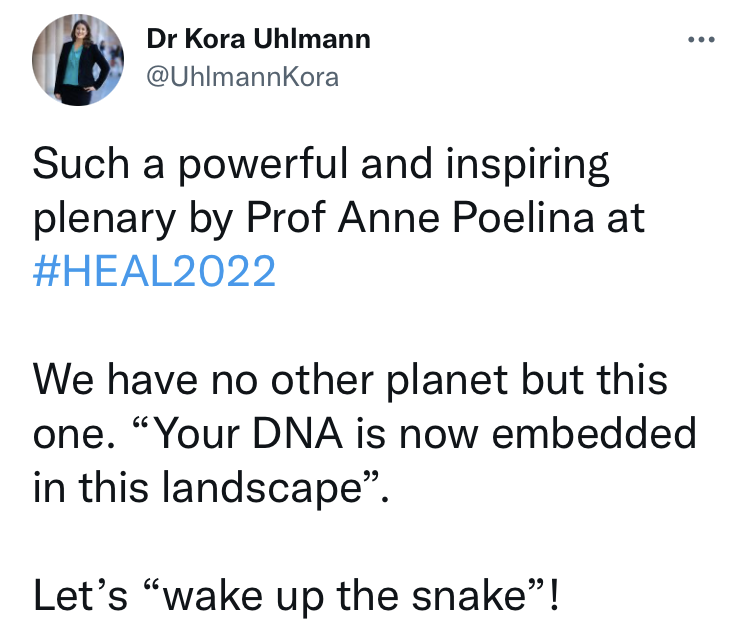 Setting the scene for a changed discourse

Ford, a senior Rak Mak Mak Marranunggu Elder, is a Senior Research Fellow at the Northern Institute, College of Indigenous Futures, Education & Arts at Charles Darwin University in Darwin on the Larrakia nation.

Speaking in three languages — Marranunggu, Marrithiyel and English, she delivered a Welcome to Country and Acknowledgement presentation for the conference from Noonjurr (Wangi Falls) in the Litchfield National Park, southwest of Darwin. Ford told the conference that the waterfall in the dry season is a hot spot for tourists. “In the wet season, it goes through self-cleansing: ideal for our second HEAL conference, as a cleansing ceremony for the whole project,” she said, particularly in light of the floods across the country.

Urging rigorous discussions over the coming days, she said the Network was looking to build partnerships that will ensure ongoing participation of ideas and resolutions “to ensure that our future is viable for young people like my granddaughter”.

(Editing note: Additional details were added about the Welcome to Country after the original publication of this article).

Previous article at Croakey from HEAL2022: With storm clouds ahead, it’s time for “transformational change for environmental, planetary, and human health”

PrevPreviousTwitter meltdown is a threat to health in many ways. So what to do?
NextAmid record health spending, what are the trends to watch?Next