When worlds collide: a tool to help improve journeys for remote Indigenous patients

A new initiative aims to help improve the journeys of patients from remote Indigenous communities. The Managing Two Worlds Together project was presented at the Lowitja Institute’s Continuous Quality Improvement conference in Melbourne yesterday. 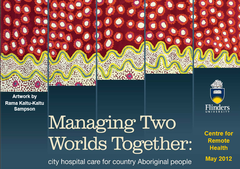 The tragic death nearly ten years ago of a frail, elderly Aboriginal man who was left alone at a remote airstrip after being in hospital has led to the development of simple mapping tools that try to improve the complex journeys many Indigenous patients have to take for medical treatment.

It was a worst-case scenario in 2006 when the man was returned to his remote community in the Northern Territory after being treated for pneumonia at the Katherine Hospital.

The coroner found that no one was at the airstrip to meet him and the pilot left him in a hot tin shed with no water. He died several days later from a combination of the pneumonia, dehydration and exposure to heat.

The case prompted health authorities to act, but Flinders University research Janet Kelly told the 2nd National Conference on Continuous Quality Improvement (CQI) in Aboriginal and Torres Strait Islander Primary Health that most remote health practitioners still have stories about health care systems that fail patients who have to travel far from home to hospital.

The failures may not be as bad, but they are mostly unnecessary and often pose significant health risks, she says.

“I’ve heard more than once about Aboriginal people turning back up in their communities and the remote area nurse or worker will say ‘you’re back, what have you had done?’ and the patient will open up their shirt, show the scar line on their chest and just shrug,” she said.

“They won’t have their discharge papers or know what medication they need or further testing they need.”

The patient’s stress and distress is not just around the actual medical treatment.

Some not be able to afford or access travel to or accommodation in regional or capital cities, they may have to go alone because family members can’t afford to go or have other care responsibilities, services may not think to offer translators or may make assumptions about cultural and spiritual beliefs, such as one case where it was assumed a traditional Aboriginal person could not be a Christian.

For those in remote areas, delayed appointments may mean missing flights and the need for urgent accommodation to be found. Medications may only be delivered once a week to some communities so any delay in advice can have big health repercussions.

As well as the significant health risk to patients who don’t get appropriate treatment and follow up care, often for major operations, Kelly says there’s also a cost to the health system.

This is reflected in the “scrambling around” that health professionals in the home communities have to do to track down appropriate treatment and medication through to cancellation of surgery at hospitals because “sometimes the journey just got too hard” and patients give up and go home.

In response to the Northern Territory case, the South Australian Government commissioned the Managing Two Worlds Together project to look at improving the system of care for Aboriginal patients from rural and remote areas of South Australia (and parts of the Territory).

In particular, the work explores their “complex patient journeys”: what happens when they have to go to Adelaide, or a nearer regional centre, for hospital care.

“We wanted to know what happens across the three transitions, when you go from country to city, from primary health care to tertiary care, and from Aboriginal community controlled health care to the mainstream sector,” she said.

Along with others in the project, Kelly, a nurse, travelled to remote areas of South Australia and interviewed patients and some carers. Many had positive experiences but many also struggled.

According to the findings, their main concerns were divided into:

“One of the key messages we got around communication from one focus group of women was: ‘tell them to say hello’ – when people don’t talk to us, we feel like a non-person’,” Kelly said.

“The system of care seems highly vulnerable to breaks and gaps when tested by the circumstances of this group of patients, often in spite of the best efforts of patients, carers and staff to make it work.

The views and experiences of staff reinforced the sense of a system that functions at the edge of its capacity in seeking to meet the needs of country Aboriginal patients, so that relatively small problems (like late planes or the lack of timely interpreting services) have consequences that reverberate in cost, in lost opportunity and in poorer health….Where the system works well, responses to the complexity of the patient journey are built in.”

In response, the Managing Two Worlds Together project has developed easy-to-use mapping tools to track a patient’s entire journey from home to hospital to home. They can all be downloaded here and are available only as Word or Excel documents, as that was what remote health workers said they preferred.

They’re designed to get health services reflecting on what the patient’s experience is like – to understand the issues, learn the lessons, and for use in planning, debriefing, auditing, justifying costs, identification of areas for improvement and staff training.

Kelly says the tools are based on five dimensions of health (see image below), with a decision taken very early in the research to embed an Aboriginal definition of health and healing, which is mostly “at odds” with the “body part” approach of hospitals.

Other important principles were to think in terms of equity rather than equality, and to “not blame but problem-solve together”. (Click on the images below to see them in more detail).

The process then looks at five factors that affect access and quality of care:

It then offers the opportunity to map multiple perspectives. 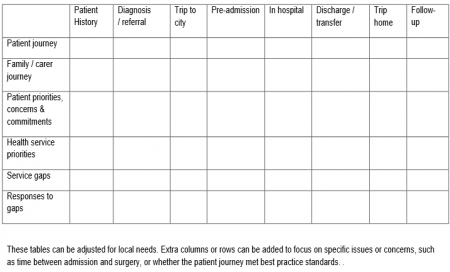 The project also provides case studies, and examples of how they could be mapped.

Kelly said there’s been good response to the tools, which are ever-evolving. She’s presented them to senior bureaucrats and health managers, and is currently working on an 18-month project funded by the Heart Foundation to look at the needs of cardiac patients.

The tools got an enthusiastic response at the #LowitjaCQI conference workshop, with participants outlining their own experiences of having patients have to make complex journeys for medical care.

“It’s very exciting,” said one GP, who described having a 16-year-old Aboriginal patient who was under child protection having to go to Melbourne to deal alone with issues around the potential loss of a pregnancy.

While noting some concerns around how to protect confidentiality, she said the tool would be an effective way to convey the complex medical and non-medical issues she faced.

Debbie Woods from the Geraldton Regional Aboriginal Medical Services said many of the issues for Aboriginal people reflect false assumptions.

“There’s the assumption that they’ve got lots of relatives to look after them, but they might not, or they might want to be private, say ‘I don’t want to be sleeping on a relative’s floor, I’m having serious tests, I need comfort’.”

Woods says local Geraldton health services work well together and provide good support for their community, but “if anything falls through the gaps it’s around accommodation and transport.”

Her organisation has its own way of assessing patient experiences, but she’s interested in what the Managing Two Worlds Together tools might be able to add.

“You can always improve. That’s what’s so good about coming to conferences like this. You get to see simple little tools that can have such an impact on patient journeys and patient outcomes.”

• Previous Croakey coverage of the conference

PrevPreviousWant Medicare savings? Stop paying for private hospitals
NextWhat did the Marches in March reveal about community health concerns? And the global picture…Next