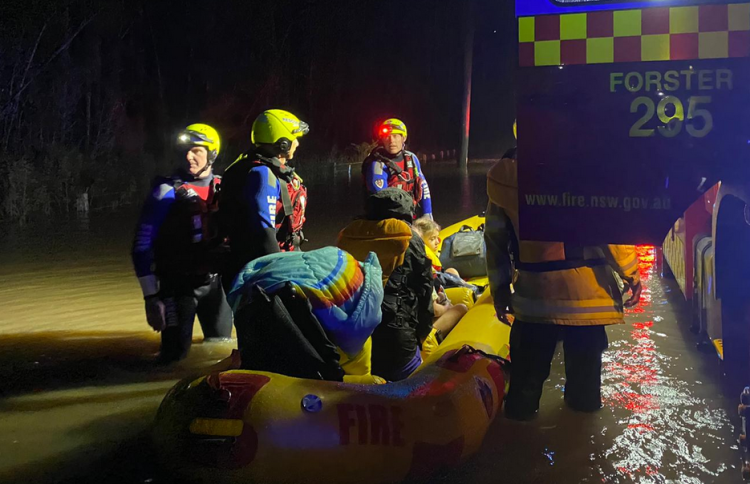 Rescue at the Tuncurry caravan park which was surrounded by moving floodwater. Photo: Fire and Rescue NSW

Another catastrophe: back-to-back climate emergencies are taking their toll on our health

Introduction by Croakey: First it was drought, then devastating bushfires, floods, a global pandemic, and now floods again.

The toll of  severe weather events will continue to grow as these catastrophes converge.

The United States has been hit by several extreme weather events during the COVID-19 pandemic,  and in Australia this week severe flooding events across New South Wales and into Queensland have hit people and communities already battered by the 2019-20 bushfires and the coronavirus pandemic.

The floods also coincided with the early rollout of Australia’s COVID vaccination program.

Amid devastating impacts, including the first lives lost in this catastrophic and ongoing flood emergency, health professionals are continuing to sound the alarm about the health consequences of an unstable climate. But is anyone listening?

Last week, western Sydney GP Dr Kim Loo travelled to Canberra with a delegation from the Climate and Health Alliance (CAHA) to speak with Government representatives about the impacts of climate change on health.

This week, Loo was dealing first-hand with the impacts on her patients of yet another severe climate event in her region.

“Most of my patients from McGraths Hill had been evacuated at 9am [on Monday], and three practice staff have not been able to cross the flooded Windsor Bridge to get to work since Monday,” Loo said as the flood waters in the Hawkesbury-Windsor region of Sydney were still rising.

One of Loo’s first consults on Monday was with a patient who had fallen down stairs while carting a load of possessions to their car to evacuate.

“It was chaotic,” said Loo, who is NSW Chair of Doctors for the Environment Australia.

She told Croakey many of the houses in her local area were built in flood zones and were not designed to withstand flooding, or the 48-49 degree Celsius heatwaves, or the blanket of smoke during the 2019-20 bushfires.

“Not that long ago that I was talking about urban heat islands,” Loo said, noting that the Riverstone area in her practice catchment was historically farmland. “The built environment around western Sydney is not built for flood zone areas, or to deal with the heat.”

CAHA said it reached out to the offices of the Prime Minister, Health Minister Greg Hunt,  Environment Minister Sussan Ley and Emissions Reduction Minister Angus Taylor, but received no response.

Port Macquarie GP Dr Sarah Mollard is also preparing to deal with the local health impacts of yet another catastrophic climate events in her region, on the NSW mid north coast.

The Port Macquarie area was severely impacted by the 2019-20 bushfires, COVID-19, and now more flooding.

“The significant flooding in our region has seen people displaced, or they have had property damage for the second time in a 12-18-month period,” Mollard told Croakey.

There were a range of health impacts from flooding, she said, starting with interruption to health services. Staff for some local medical practices have not been able to travel to work, or have lost their homes, Mollard said. Also, patients may be isolated from health services or practices themselves may be flood affected.

“That impacts on the capacity of services to provide care,” she said.

As the months go on, however, it’s the mental health impacts that emerge.

“My biggest concern, in terms of my patients’ health, is the mental health impacts,” Mollard said.

“What we have seen over much of NSW, particularly the East coast, is ‘stacked distress’.

“There has been a very extreme drought situation affecting much of NSW, and that was followed by the unprecedented climate-driven bushfires in 2019-20, and there were some further flooding events in Mid-North Coast and Northern NSW regions just after the bushfires, then COVID, and now this major flood event.”

Mollard said this string of events meant that communities had not had the opportunity to recover and “rebuild their resilience”.

She pointed to Western Sydney University research that had shown the long-term mental health impacts of flooding in the Lismore region.

“There can be mental health impacts for even several years following an event,” Mollard said. “Where people haven’t had that chance to recover,the stress builds up with one thing after the other, we start to see increased impacts on people’s health and wellbeing.”

She added that, alongside support from health services, social and community responses to these stressors were crucial.

“Community-based approaches and social care are really important in the context of these events,” she said. “It’s crucial that the community comes together to support each other.”

And it’s not just humans that are impacted.

Dr Angela Frimberger, Board Member for Veterinarians for Climate Action and a veterinary oncologist in Lake Innes near Port Macquarie, said many cattle had been swept down the Hastings River, and several were rescued from the surf at Port Macquarie.

The same devastation was being experienced in the Macleay Valley and the Manning Valley, on either side of the Hastings River, she said.

Frimberger talked about the fear that animals must be experiencing when they get swept away, noting that it was often said that animals were “lost” in a flood, but this didn’t represent the impact on them.

“By the time that they get back out of the water, if they do, they are exhausted, terrified, hypothermic, and dehydrated,” said Frimberger, who was also part of the CAHA delegation to Canberra, adding she has great sympathy for the huge practical and emotional losses to the animals’ owners.

“These animals are in terrible physical condition. They are often injured because of all the debris.”

Native animals too are impacted, with devastating inundation of the burrows of ground-dwelling animals such as echidnas, wombats and smaller ground-nesting animals, Frimberger said, noting the already fragile state of Port Macquarie’s koala population.

“Koalas are generally in a tree, but should they happen to get caught in floodwaters, they are very vulnerable,” she said. “In Port Macquarie, our koala population is so precious to us because we are a koala genetic diversity hotspot.”

She said the koala colonies had already been affected by habitat loss, then the bushfires.

“Those poor koalas are just hanging on. Every individual koala lost in Port Macquarie right now is a heartbreak.”

As the frequency and intensity of adverse weather events increases, so too does the likelihood that these events will overlap or converge.

The New England Journal of Medicine reported recently of the challenges in dealing with multiple crises back to back or simultaneously. Author Dr Renee N. Salas, an emergency physician and Yerby Fellow at the Center for Climate, Health and the Global Environment at the Harvard T.H Chan School of Public Health wrote:

The climate crisis is a quintessential metaproblem and threat multiplier, with frighteningly broad health implications, ranging from climate-sensitive waterborne and foodborne illness to worsening mental health.

It is making it more difficult for all of us in medicine to do our job of preventing harm and improving health, one patient at a time. There is thus a profound and urgent need to implement clinical practice improvements that will safeguard the health of our patients and the resilience of our care delivery system in the face of growing climate-related challenges.”

In a separate issue of the Journal, Salas and co-authors wrote that hurricanes in Louisiana, scorching temperatures in the southern US, and wildfires in Arizona were hampering efforts to control COVID-19.

“The intensity, frequency, and duration of climate-related extreme events — including hurricanes, wildfires, floods, heatwaves, and droughts — are increasing, and these events often overlap temporally and geographically, jeopardising SARS-CoV-2 infection control.”

While minor by comparison given Australia has barely any COVID-19 cases, our  COVID response was also impacted as severe flooding this week prevented vaccine deliveries from reaching some parts of NSW.

This is what makes a climate emergency

Mollard said there were two significant issues to deal with in tackling the health impacts of climate change.

First, she said, was a critical need in Australia for coordinated action to reduce the drivers of climate change and to reduce CO2 emissions.

She said “this was exactly the sort of scenario” that the  Australian Medical Association  and Doctors for the Environment were talking about when they had declared climate change as a health emergency in 2019. She said:

We know that we are going to be seeing increased frequency and severity of natural adverse weather events and disasters, heat waves, and other impacts. We know that the mental health and the social impacts are also expected to be significant.

But, as someone who is experiencing those disasters on the ground, planning and co-ordination to manage these events is inadequate and doesn’t take into account increased risk.”

Loo agrees. “If you look at the fires, you can see the built infrastructure for energy and communications was inadequate,” she said, noting that, during the 2019-20 bushfires, a GP colleague had been forced to run a medical clinic using a friend’s Tesla battery.

“The main thing we went to Canberra about is that we still don’t have a framework to deal with health and climate change – we have to acknowledge the problem, and we need leadership to protect the population and support adaptation.”

For Mollard, it is well time that Australia got serious. 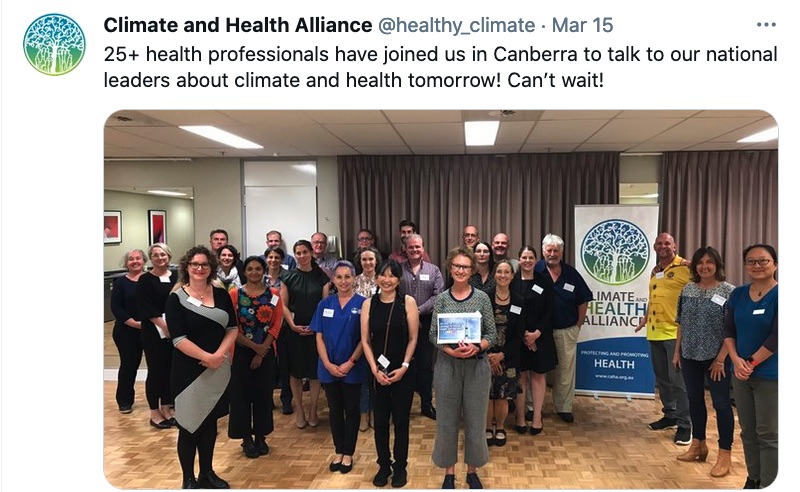 PrevPreviousAustralia’s COVID vaccine rollout gathers pace, but global inequity may be elephant in the room
NextWhat we learned from tracking every COVID policy in the worldNext