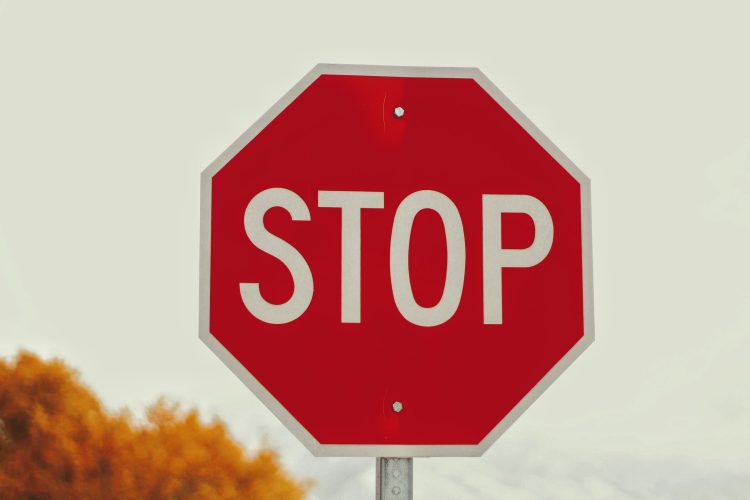 Flinders University came under strong national and international criticism today, as the university executed its plan to close the Southgate Institute for Health, Society and Equity, and to “dis-establish” the positions of key staff, including the Institute’s director, Professor Fran Baum.

Twitter was flooded with an outpouring of support for the Southgate team (see a selection below), including from health leaders around the world.

The Public Health Association of Australia (PHAA) issued a statement calling on Flinders University to reverse its decision, as did the Australian Health Promotion Association (AHPA).

As reported at Croakey yesterday, many other public health leaders have also written directly to Flinders with their concerns.

PHAA CEO Adjunct Professor Terry Slevin said it was “hard to fathom” that Flinders was closing a key research centre at a time when Australia desperately needed to grow its public health workforce, with a focus on equity.

Slevin said the public health cuts were not unique to South Australia. “We are aware of other senior successful and leading public health academics whose employment is under threat in WA, Victoria and NSW,” he said.

“At a time when public health expertise is in  greatest need, the university sector is shedding some of the academic thinkers and teachers who
are vital to train our next generation of public health leaders.”

PHAA President, Professor Tarun Weeramanthri, said: “Professor Baum, and her three other senior colleagues and eight current researchers, are a  national asset in these times.”

“We are calling on the Flinders’ leadership to immediately reverse this decision.”

The AHPA expressed shock and dismay at the news, and Association President Dr Gemma Crawford said: “Now more than ever we need strong and capable hands to help guide our efforts to address the social determinants of health in our increasingly fast-paced and complex world.

“Professor Baum’s contribution as a thinker, advocate, leader and educator are legendary. So many of us have been inspired by her writing and presentations and her renowned contribution to health equity through the World Health Organization’s Commission on the Social Determinants of Health.

“We need strong institutions and a strengthened higher education system to generate the solutions needed to tackle global health challenges. Now is not the time for disinvestment.”

The Consumers Health Forum of Australia also called for Flinders “to drop this retrograde move”, tweeting that the decision “is a huge blow to public health research”.

Flinders University issued a statement defending the restructuring, which was confirmed today to Baum and colleagues.

Vice President and Executive Dean of the College of Medicine and Public Health, Professor Jonathan Craig said it would “support an uplift in education and research focused on national and global priorities, and contribute to better public health, particularly for Aboriginal and Torres Strait Islander people and communities”.

He said that following consultation with staff, the College is creating a new discipline of Population Health to be led by an Aboriginal and/or Torres Strait Islander academic.

The implications of the restructure for many Aboriginal health services and organisations working with the Southgate Institute are unclear.

An article in Adelaide publication InDaily said that Baum has been a vocal critic of the Flinders hierarchy in the past; she was one of several academic staff to oppose a controversial 2018 restructure, telling a governing council meeting at the time that “the rich forest that was the Flinders academic community has really been clear-felled” by the proposed changes. 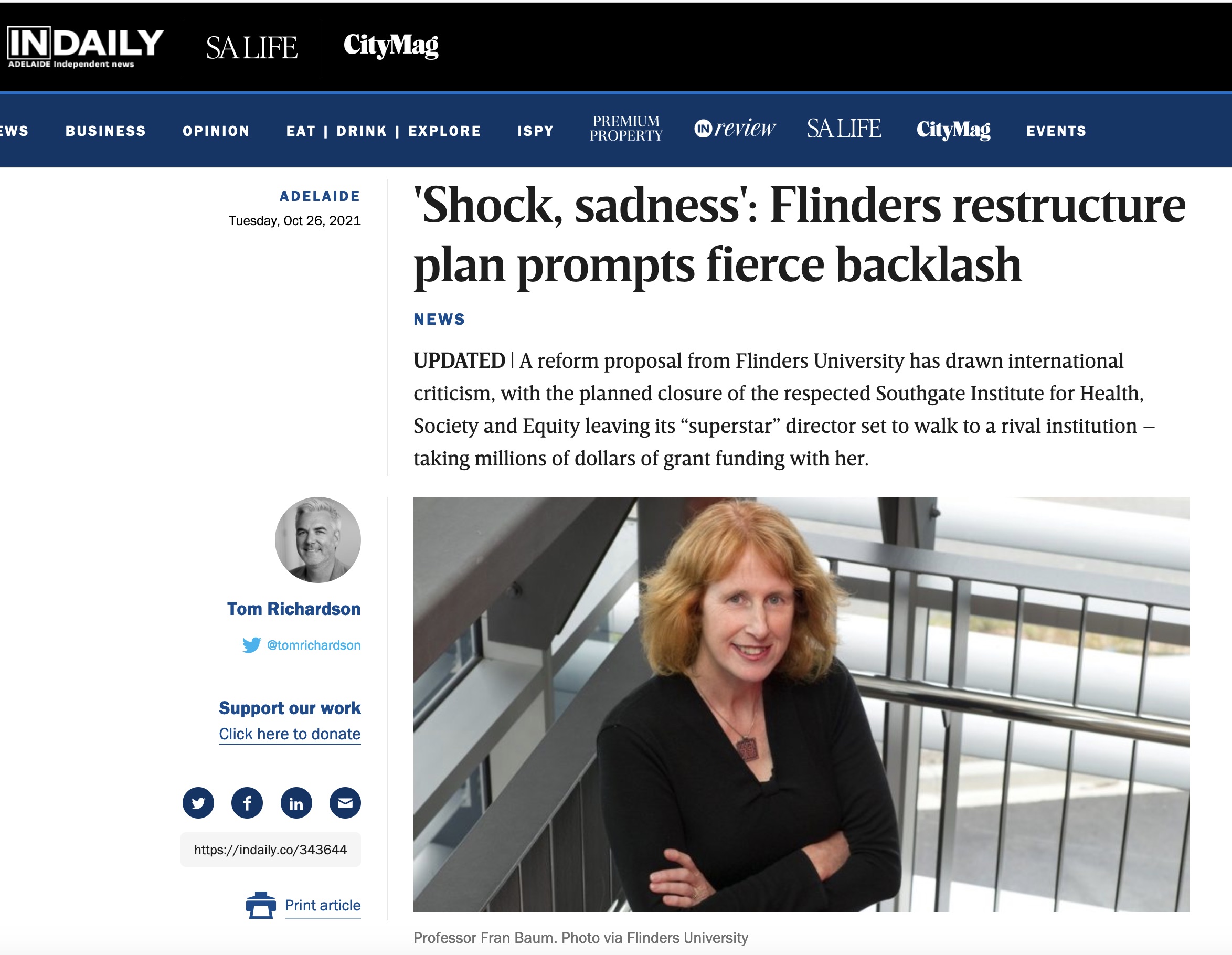 Dr Jocalyn Clark, Executive Editor of The Lancet and editor of The Lancet Commission on Gender and Global Health, today wrote to Professor Colin Stirling and Professor Jonathan Craig, saying she was “astonished and disappointed” by their decision, and strongly urged them to reconsider.

Clark said she could attest to “Fran’s exceptional impact and contributions, and the esteem with which she is regarded”.

“There would be no Lancet Commission on this topic without the expertise of Fran, whose world leading reputation in advancing the social sciences in health is second only to her leadership and personal qualities that inspire and motivate her colleagues. Her work on the Peoples Health Movement has been particularly impactful in holding government and institutional decision makers to account, and is a civil society movement any university should be proud to be associated with. Fran’s inspiring work at your university advocating the need for a social vaccine for Covid-19 was recently highlighted in The Lancet, the world’s leading and widely read medical journal.

“If the Covid-19 pandemic has taught us anything it is that only equity and solidarity will save us from global threats, and it is the political and social sciences that have been missing from pandemic preparedness and response action. I should have thought an institution like Flinders University would double down to support and amplify the essential service that Fran Baum brings to the world’s health community and post-pandemic recovery. I fully appreciate the need for diversity and continual strategic planning, but would have expected someone with Fran’s leadership and global profile would help you deliver on your expansion and diversification plans.”

Dr Miriam Vandenberg, a researcher based in Tasmania, sent these comments to Croakey:

“I’ve had a long personal and professional association with the Southgate Institute. I commenced my public health academic journey at Flinders Uni in 1993 and subsequently developed a strong interest in the social determinants of health, and throughout my career I kept a keen eye on Southgate’s work and was always eager to read Southgate’s publications and attend staff presentations at conferences throughout Australia. I admired Southgate’s strong stand on health equity – in my eyes they exemplified the essence of public health: to understand and advocate for the social reform that are necessary to protect and improve health. And their work wasn’t simply about the material resources that individuals had or did not have access to – rather they were looking at issues such as power, ideology, politics and policies, transnationalism – the hard stuff, and the ultimate drivers of the SDOH!

“When I decided to undertake a PhD in 2017, connecting with Southgate and Professor Fran Baum was a no-brainer for me because of the recognised leadership, expertise and credibility in social determinants of health equity. I feel very fortunate to have been able to do a PhD under the supervision of Fran and Dr Kathryn Browne-Yung. Their knowledge, guidance, support and care set me up for success. And it wasn’t just Fran and Kathryn’s supervision that was outstanding, it was the Southgate team as a whole – I got to know many of the researchers, I was invited to be part of a large research team with experts from around the world, the administration staff were helpful – all of this was important for me, particularly given that I was based remotely in Tasmania.

“If Flinders Uni goes ahead with its proposal to abolish the Southgate Institute, it will no longer have a reputation as a leader in health equity knowledge generation and research on the global stage. The University’s informed representation on local, national and international forums of public health significance, breadth of expertise and knowledge generation, and production of high quality public health research will surely be compromised. At a time when we need public health expertise – including a strong voice for health equity – more than ever it beggars belief why Flinders Uni would want to take this step.” 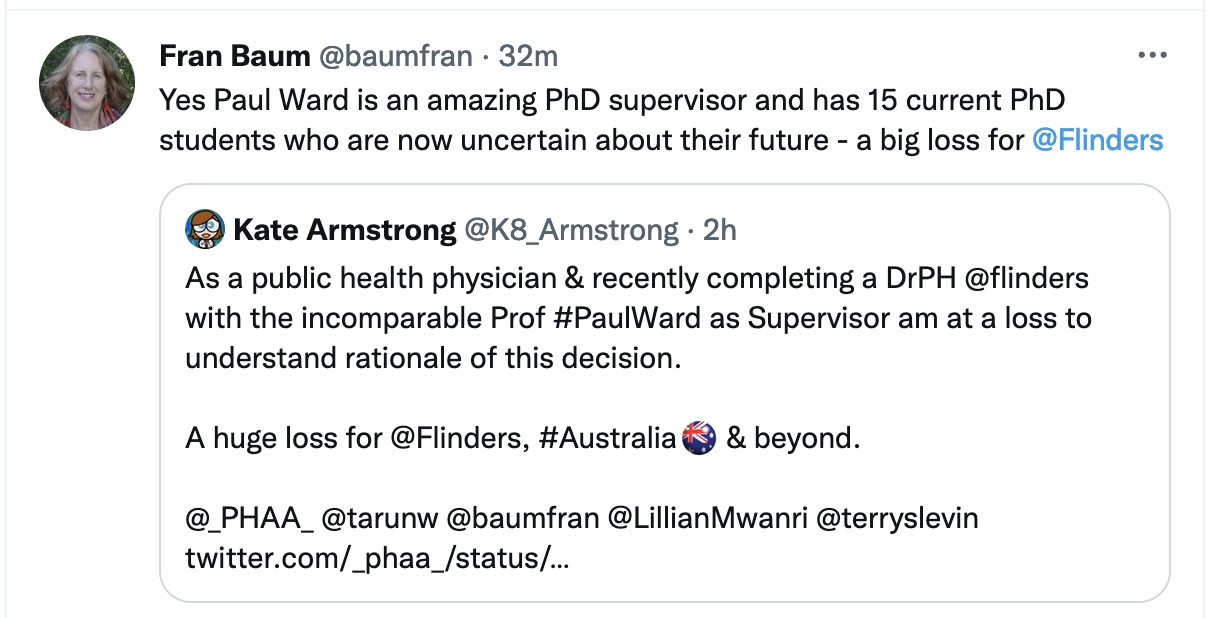 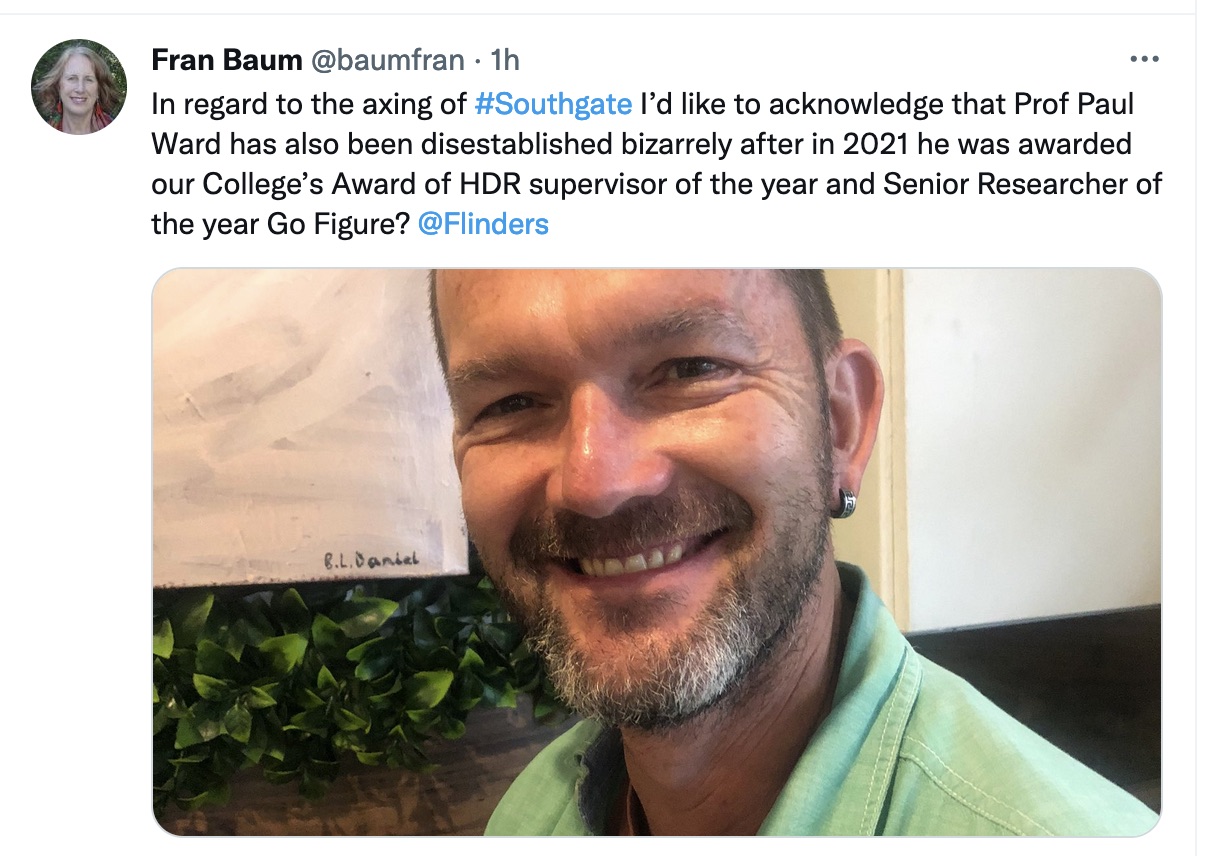 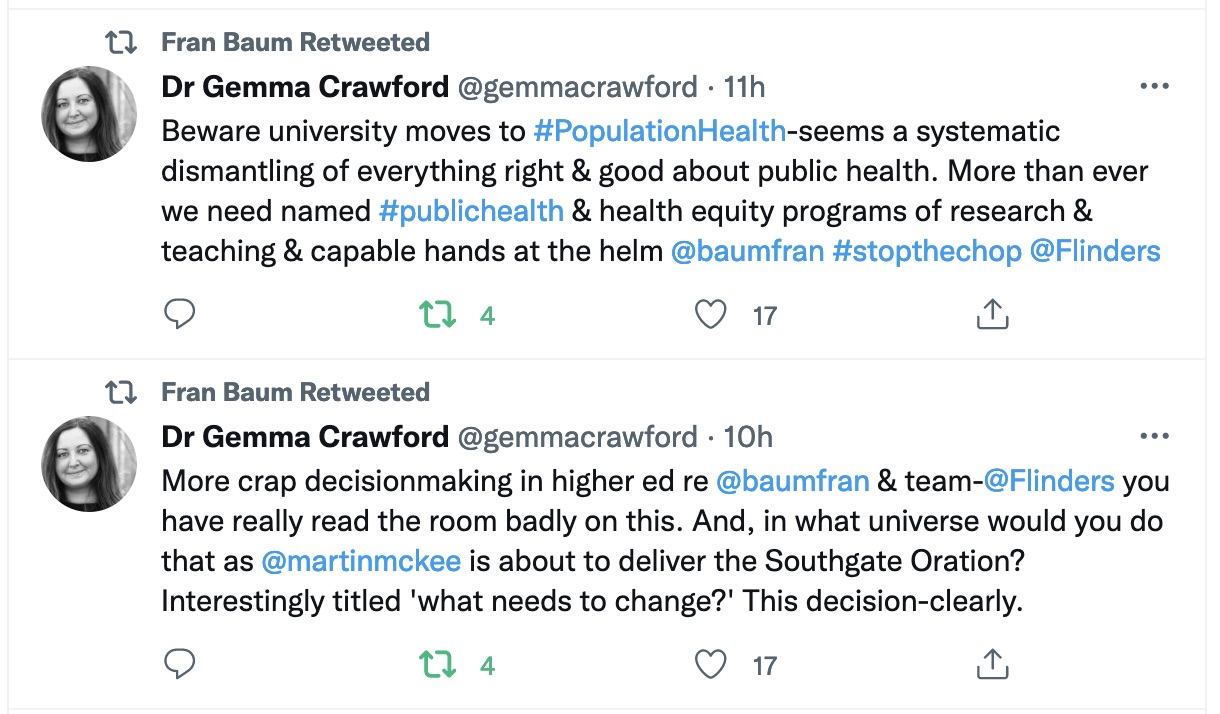 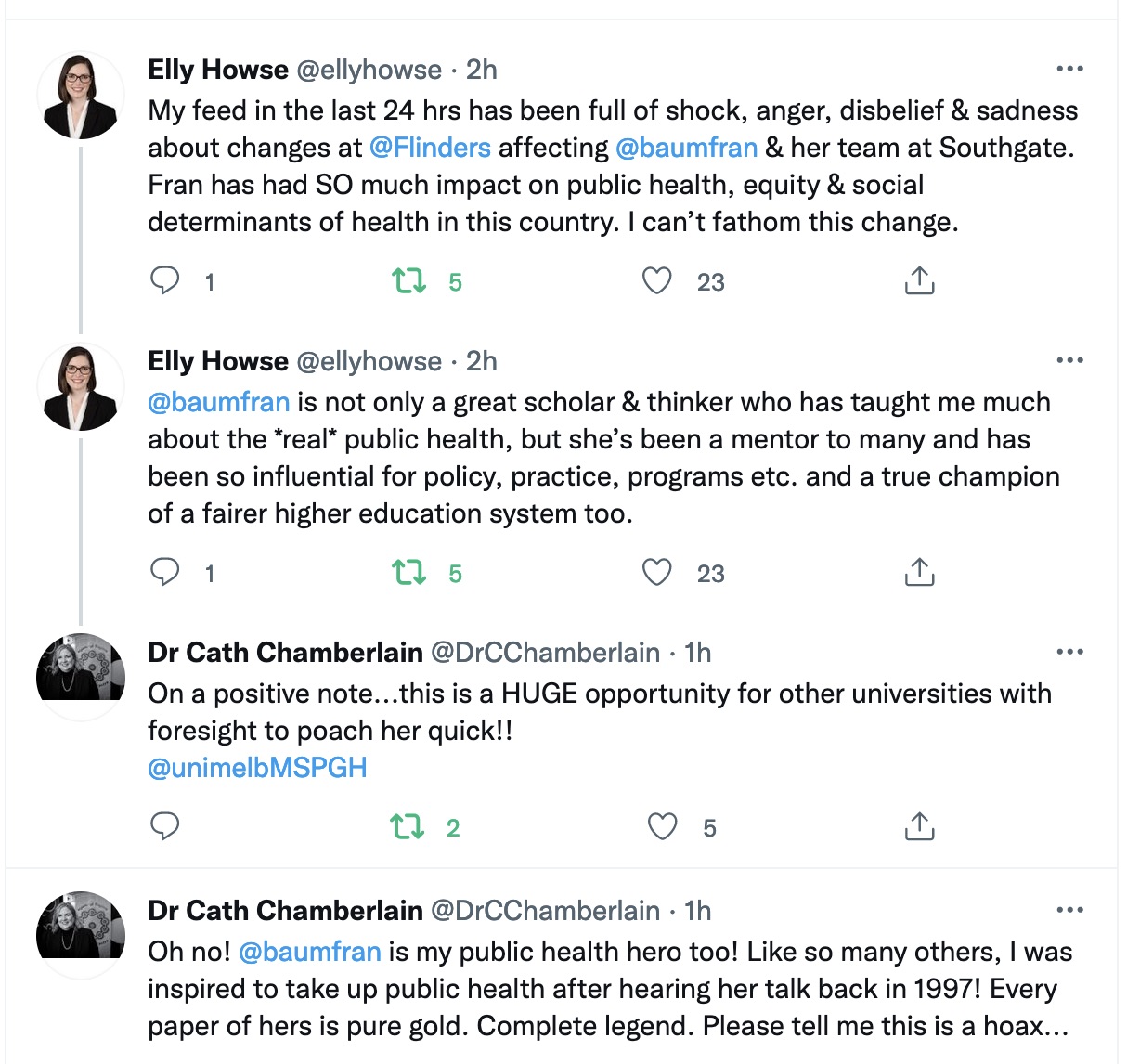 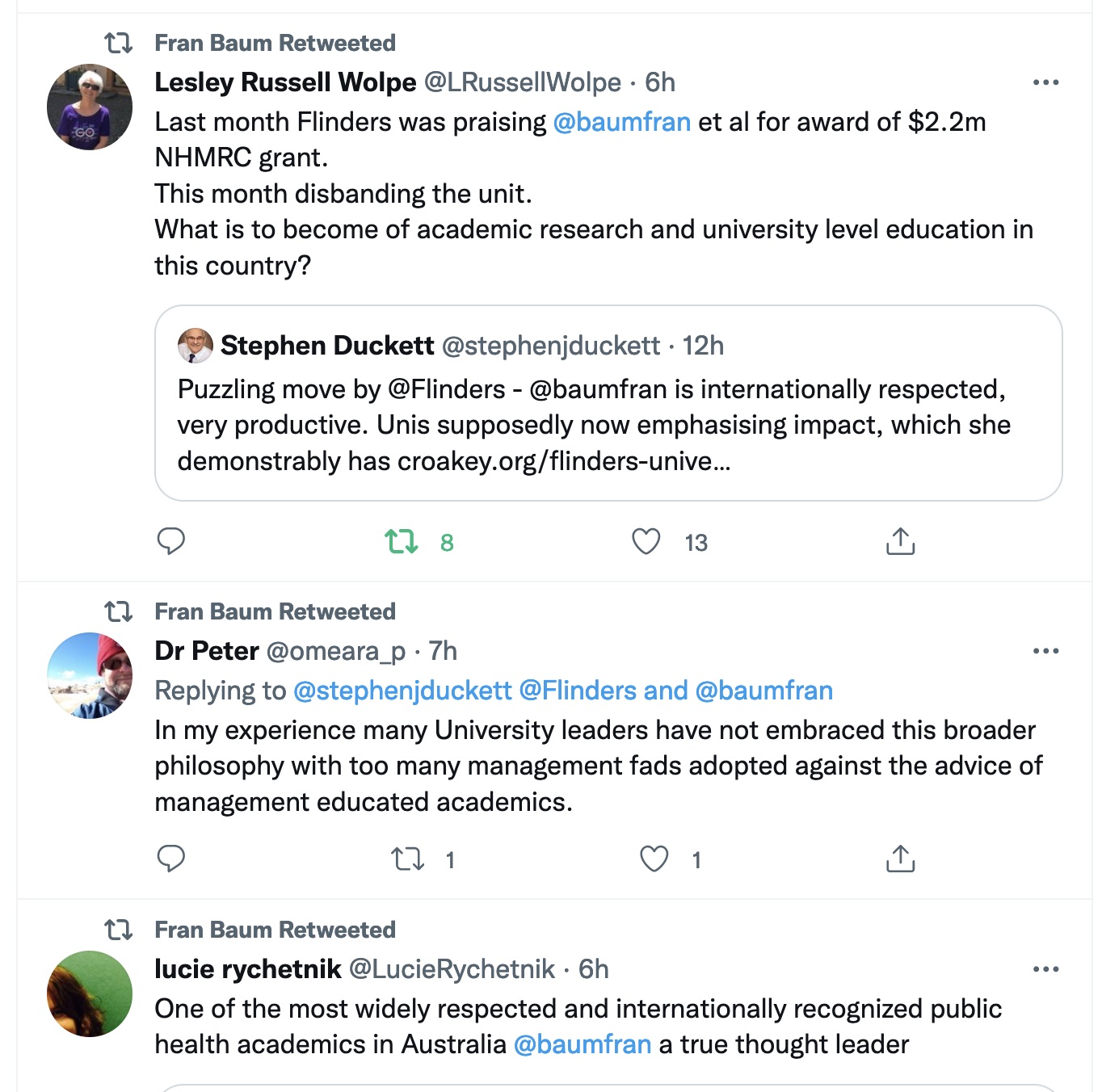 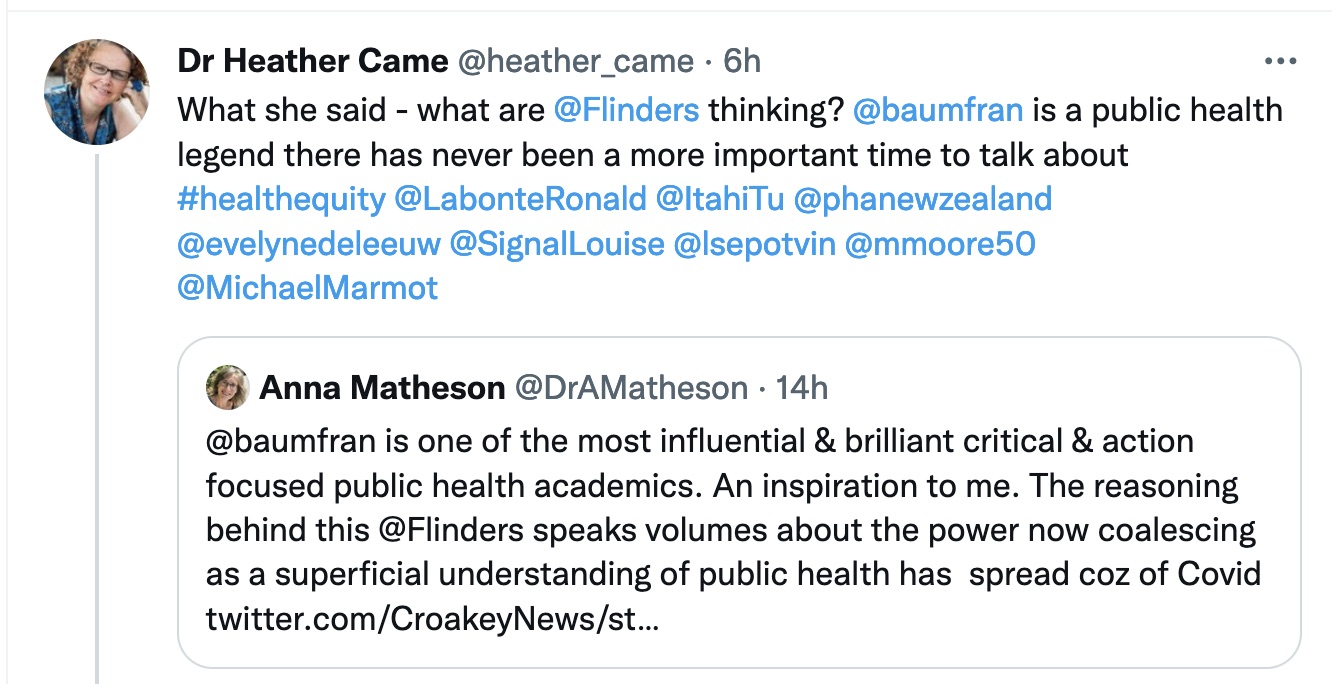 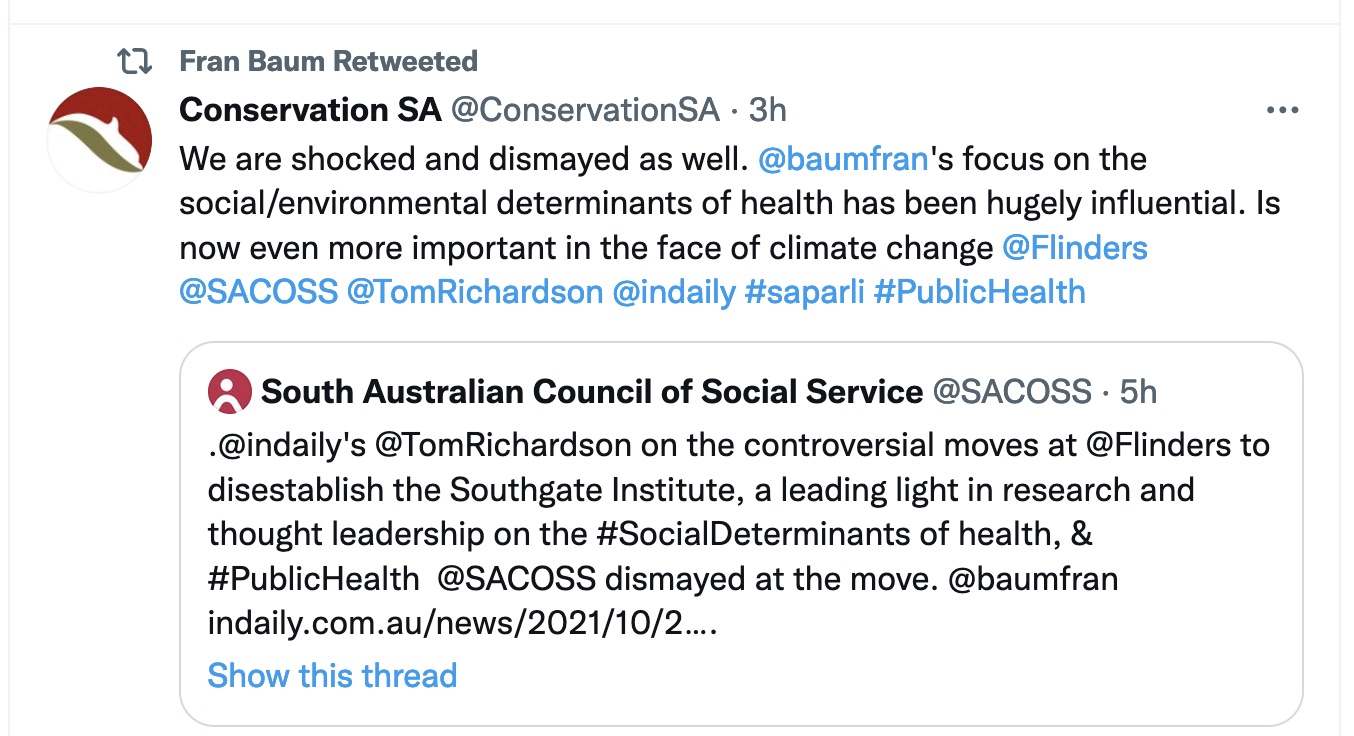 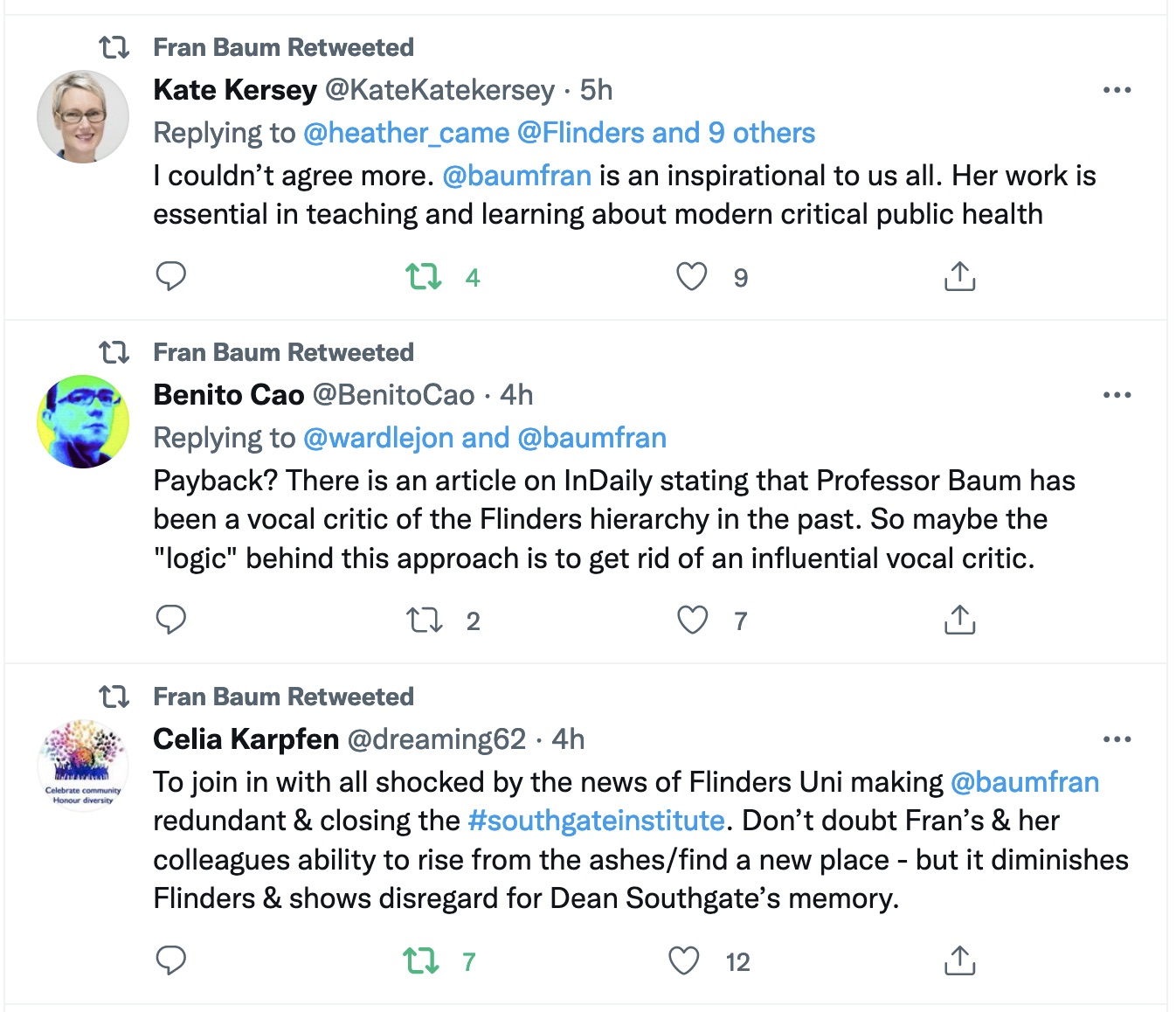 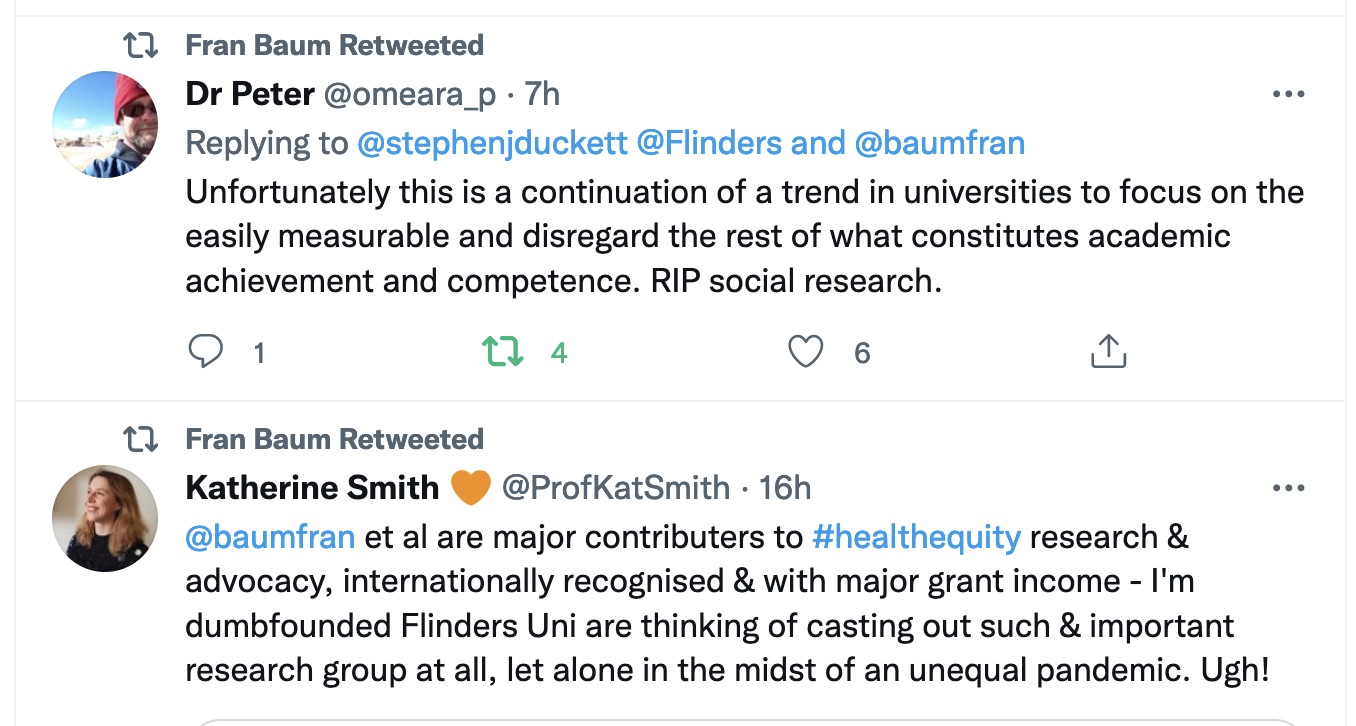 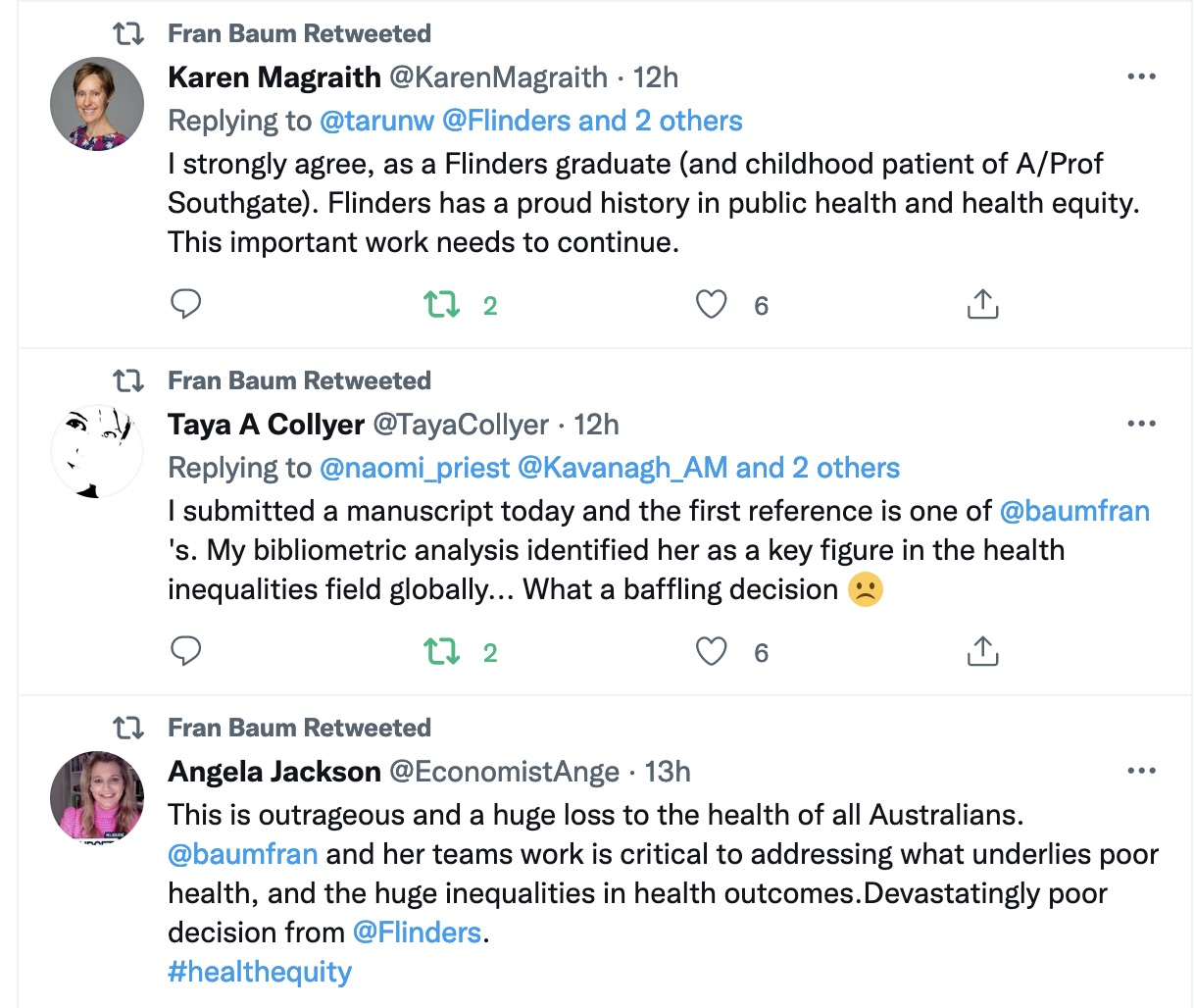 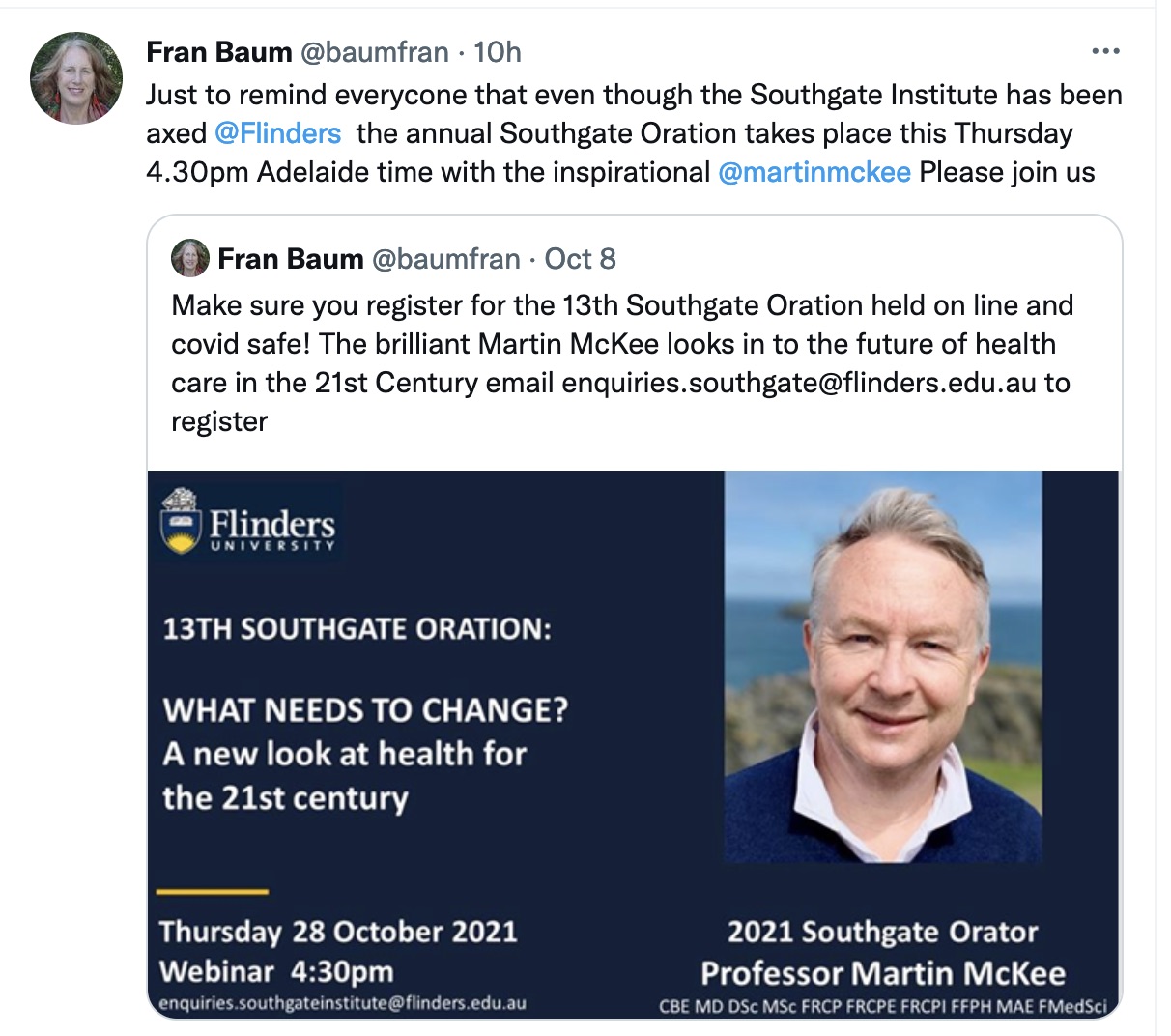 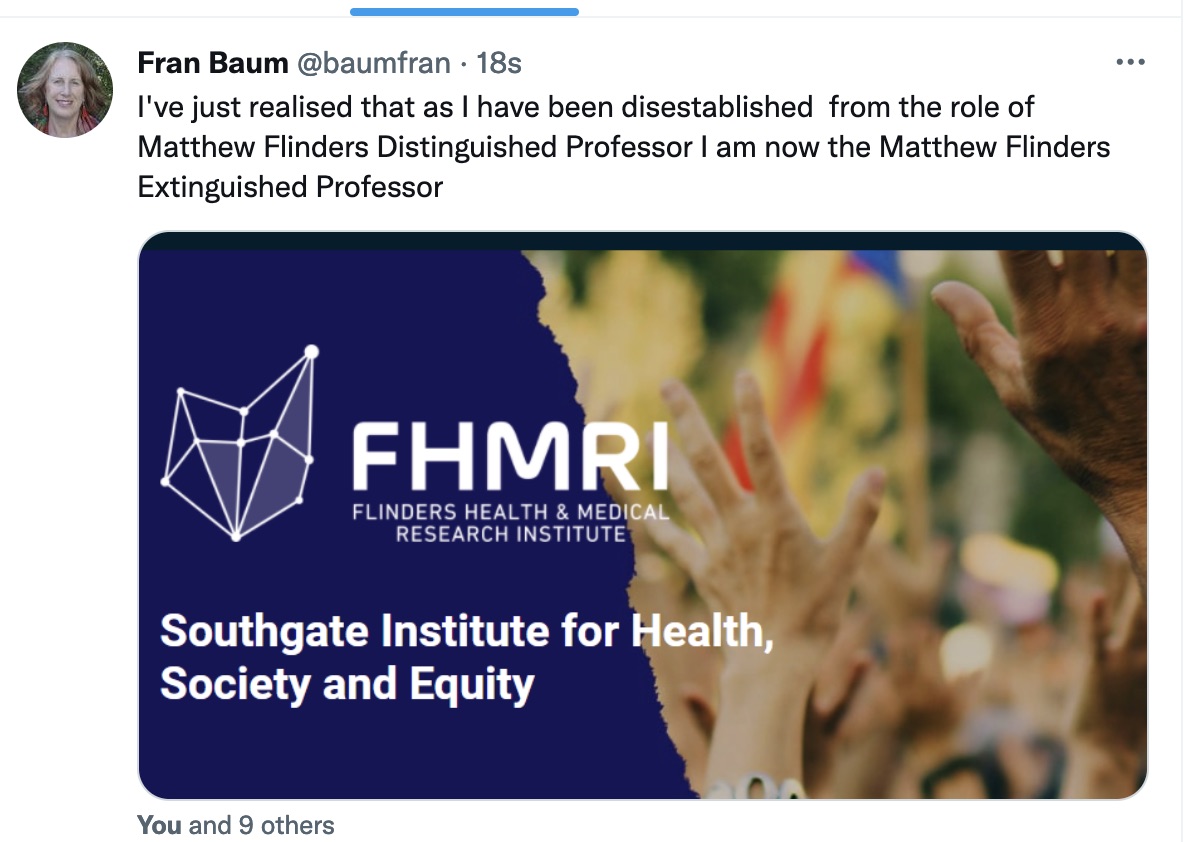 Declaration: Melissa Sweet has previously provided services to the NHMRC Centre for Research Excellence in the Social Determinants of Health Equity through Croakey Professional Services.