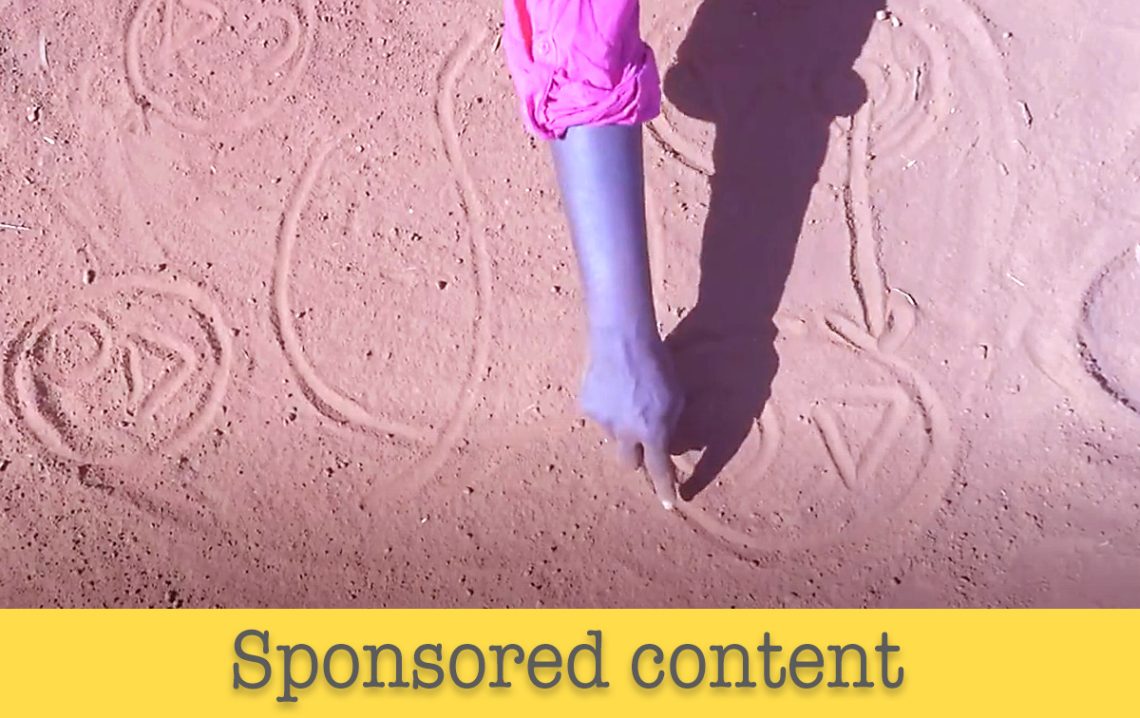 Image from video: Following the Jina: How we value our young men.

Introduction by Croakey: In Western Australia and Queensland, Aboriginal Elders have been sharing cultural knowledges with young men in research exploring their strengths, experiences and aspirations.

The Valuing Young Aboriginal and Torres Strait Islander Men project, described below, was funded by the Lowitja Institute to support intergenerational knowledge exchange. It produced videos that demonstrate the power of yarning and connecting to Country within research.

This article follows three previous articles in this series on Indigenous knowledge translation, sponsored by the Lowitja Institute, and edited by Associate Professor Megan Williams.

The series shows the importance of community members and end users driving research, and the role of Indigenous cultural practices in knowledge translation.

Under a blanket of stars in the Pilbara region of Western Australia, Ngarluma and Yindjibarndi Elders are yarning around a campfire, sharing knowledge of their cultures with young countrymen.

They explain that knowledge of their cultural law is key to young men growing strong and taking their rightful place in the communities, as leaders of the future.

The young men are reminded of the importance of travelling in the footsteps of their ancestors.

“When we put young fellas through the law, we don’t sit them down in a workshop, talk at them or run them through a classroom learning module,” says Ngarluma Elder Peter Jeffries.

“We take them out and get them to follow the Jina…to walk, use their feet to travel the footprints of the old people. We get them to learn by following the steps, singing the old songs, being with their family and being on Ngurra or Country.”

The campfire sessions are part of a health research project funded by the Lowitja Institute using Indigenous knowledge translation.

Using Indigenous knowledge translation principles, the project was a collaboration between senior Aboriginal male researchers and research partners connected with Country and communities in Western Australia and north Queensland.

It contributes to the strong body of evidence about health benefits of connection to culture  and Country for Aboriginal and Torres Strait Islander peoples.

In 2017, more than 30 people working in the area of Aboriginal and Torres Strait Islander men’s health and community wellbeing came together in Naarm/Melbourne for a roundtable meeting convened by the Lowitja Institute with the aim of guiding future work. Participants discussed the importance of celebrating the diverse identities of young Aboriginal and Torres Strait Islander men.

“Culture, and the values and principles of Aboriginal and Torres Strait Islander culture, connect young men to the past, present and future,” stated a report of the roundtable.

“Cultural identity can build individual and community capacity and is a resource for facing challenges.”

The Valuing Aboriginal and Torres Strait Islander Young Men research was based at the Australian Indigenous HealthInfoNet at Edith Cowan University. It was undertaken in partnership with the University of Western Australia, Murdoch University and several community groups.

The project emphasises the importance of developing supportive processes for the exchange of intergenerational knowledge; for example, sharing it with communities, through the processes of yarning, video voicing and filming.

It also demonstrates the importance of research processes, to centre the experiences of communities and for the research to be community-driven, in this case by male Elders and other fellas.

These are all key elements of Indigenous knowledge translation.

The Valuing Aboriginal and Torres Strait Islander Young Men project produced two videos (see below) and a report exploring strengths-based approaches to cultural wellbeing, at the most critical stages of young men’s transition into adult life.

Lead researcher and Elder Dr Mick Adams, a descendant of the Yadhiagana/Wuthathi peoples of Cape York Peninsula, says the emphasis was on positive messages from and to young Aboriginal and Torres Strait Islander men.

“Many of the young men taking part in the project wanted to learn about culture and what they did learn made them more aware of their roles as males,” says Uncle Mick. “It gives them a more positive outlook in life.”

It also pointed out that the 2008 Aboriginal and Torres Strait Islander Social Survey found 65 percent of children and young people said they had been to one or more selected cultural events (fishing and hunting, ceremonies, and NAIDOC events) in the past year.

In line with Indigenous knowledge translation, the team worked to protect the sovereign data of the communities involved – their control of how data is collected, used and owned. This supported them to use their knowledge to influence governments, and advocate for strong, financially sustainable programs throughout Australia.

The researchers worked with local men, visiting the Pilbara and Broome in Western Australia, and Cairns and the Gulf of Carpentaria in Queensland, in order to explain the research and role model how it is done. This included data being collected as stories via video interviewing.

At every point of the research project’s journey, the team were accompanied by local custodians and no stories were recorded or filmed without the clearance of those who had responsibility for that Country and law. Film footage was then checked to ensure its accuracy and that it was culturally safe to share.

The discussions and interviews were arranged and conducted where the participants felt safe, comfortable and confident to share. The researchers recorded the participants’ voices, emotions and actions, and worked hard to convey how the young men lived and the connections between health, culture and identity.

Elders, young men and extended community were also recorded together. This helped encourage knowledge sharing during in-depth conversations – the ways the Elders nurtured and supported young men, and how young men saw their lives, the positives and what they want to achieve.

The project helped young men to know they are valued, and to know their rightful place and important roles in society, says Muthi Muthi man Jack Bulman, who leads one of the community partners participating in the project, Mibbinbah Spirit Healing. This is an Aboriginal-led health promotion organisation that itself began as an action research project.

We need all the fellas in community to have a say. We have to remember our diversity as Aboriginal and Torres Strait Islander males.

And we have to remember that there are fellas who feel alienated in the community, and find ways that we hear from them.

Our dream is to ensure that our cultural knowledge is not lost, can’t be lost, but is shared and used by our next generations of young men.”

As part of a mid-2019 trip on Country to ‘follow the Jina’, Yindjibarndi man Vincent Adams speaks on the video about the importance of young men being taught law by their Elders in the Pilbara in Western Australia.

Uncle Vincent explains that the Jina connects all the men and women in those remote communities, bringing together more than 29 language groups to celebrate a youth becoming a man.

“Most importantly, it teaches respect… Respect your elders, your family, your law, your culture and, most importantly, respect Mother Earth,” he says in one of the videos above.

“When they see an Elder that has full control over his law and culture in his Country, is here witnessing you going through law, that is the utmost respect you can get anywhere. Everywhere they go; out bush, in town, in the cities … doesn’t matter. That respect will stay with that young fella forever.”

In that video of the trip, young men, children and Elders gather around a campfire and walk on Country. Elders explain plants and physical features of the land, and tell of the importance of the storylines and the songlines, the dances and the art, and of the connection between people and Country.

One of the young men, Gary Ramirez, explains how he connected with culture after moving to the Pilbara town of Roebourne.

“This law gives me a way of life,” he says. “It teaches me how to live a good life.”

On the video, Aunty Michelle Adams explains that “getting the Jina right” requires participation and practice.

“Go in, participate, sing and dance…don’t leave it on the law ground…What the law teaches you is an abiding respect for all your people. Because all your people in this generation, like all the mob before them, they were doing the same thing,” she tells the campfire gathering.

Ngarluma Elder Peter Jeffries says his greatest fear is that he and other Elders will take the knowledge with them when they go or it will end up in a display cabinet in a museum, complete with little models of people doing things from a bygone era.

“If we don’t teach the young people about the law or bring them along on the journey – rather than force them – that’s what might happen,” he says.

For the research team, connecting across generations – with aunties, uncles, grandmothers, grandfathers, fathers and mothers – was important as all play important roles in shaping young men’s lives.

This is Indigenous knowledge translation in action and what the Valuing Aboriginal and Torres Strait Islander Young Men project has been able to record and share.

Among the messages coming through the project were that while many young men transitioning to adulthood are living with trauma, they had a positive approach to life but needed strong role models and mentors to guide them.

As Ramirez explains: “I had all this great help from my people and people weren’t dictating to me. They weren’t talking down to me. They were actually below me talking up, saying ‘you will be right, get through this’…

“With all of that strength from them, it helped me turn my life around.”

The Valuing Aboriginal and Torres Strait Islander Young Men videos are useful for changing mindsets, he says, with feedback from community that it’s “really good” to be able to view the videos and learn from the shared knowledge.

“In the end, the young men become teachers themselves. That’s the way the culture lives on.”

That is why the team wants the research and the videos shared as widely as possible.

“We didn’t want to put it in a cabinet and leave it there,” says Uncle Mick. “What we want to do is share the teaching and learning. That’s why Indigenous knowledge translation – via yarning and film – is very important to us.”

In addition to the two videos produced for the project, the raw footage of the interviews is available via the Aboriginal HealthInfoNet website.

This article was written by Cate Carrigan and edited by Associate Professor Megan Williams, a Wiradjuri researcher and the Research Lead and Assistant Director of the National Centre for Cultural Competence at The University of Sydney, on behalf of Croakey Professional Services.

The series was conceptualised and sponsored by the Lowitja Institute, which had final say over the content. Register here to attend a Lowitja Institute webinar on 12 August on Indigenous Knowledge Translation.

PrevPreviousAustralia’s vaccination plan is six months too late and a masterclass in jargon
Next‘Running not walking towards planetary-scale disaster’: the IPCC’s latest state of the climate reportNext