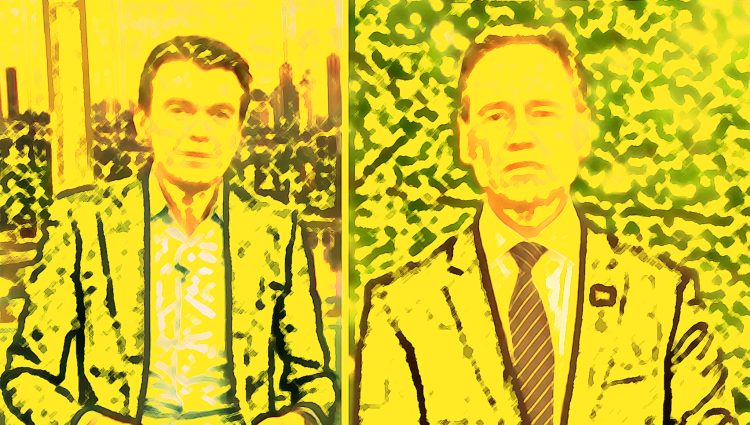 Introduction by Croakey: Australians generally have demonstrated a high degree of trust in governments and public health authorities throughout the COVID-19 pandemic. This has been identified as one factor contributing to the success thus far of our response.

Maintaining this high level of trust is crucial for the roll out of the vaccine program, being just as crucial as supply issues, clinical protocols and cold chain management.

The Federal Government is clearly making an effort to provide information about COVID and the vaccine program to the community. However, these efforts could be undermined if the Government is seen to use the vaccine campaign for its own political advantage.

This is why the inclusion of the Liberal Party logo on a government vaccine announcement has raised the concern of public health experts. 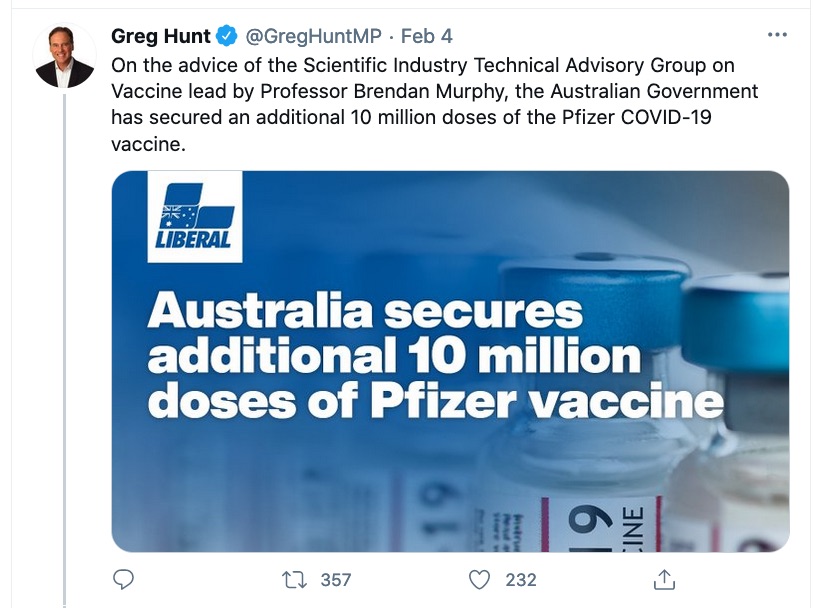 It’s not clear whether the logo’s use violates the Government’s own advertising guidelines. But it clearly doesn’t help build public trust in the vaccine campaign.

Adding to these concerns was Health Minister Greg Hunt’s response to an ABC journalist’s questions about the use of the logo in an interview on ABC Breakfast today.

The inclusion of the Liberal Party logo on a Government vaccine announcement had already attracted some criticism before this morning’s interview.

But it was Minister Greg Hunt’s response to questioning by ABC’s Michael Rowland that has escalated this issue and drawn a vigorous response from the sector and wider community.

Rather than address the legitimate concerns raised by Rowland, Hunt made a ham-fisted attempt to bluster through the interview, talking up the “heritage” of the Liberal party and making unjustified ad hominem attacks on Rowland.

When asked about the logo, Hunt said:

I was elected under that banner. Multiple members from across multiple parties do that.

I’m a very proud member of that party with a great heritage and tradition in Australia and that’s part of the Australian democratic process.

There’s no problem with identifying entirely appropriately within the rules. The origins and heritage of that banner under which we were elected by the Australian people.”

Public health leaders and experts have strongly criticised both the use of the Liberal Party logo and Hunt’s response.

Adjunct Professor Tarun Weeramanthri, President of the Public Health Association of Australia, tweeted that Rowland’s question was “legitimate and important”, adding that “attacking a journalist for asking a question is not OK. The question remains unanswered.”

Weeramanthri is a former Chief Health Officer of both Western Australia and the Northern Territory and has been advising the Federal Government on the COVID-19 response.

Dr Summer May Finlay from the University of Wollongong agrees that the inclusion of the Liberal party logo on the announcement risks politicising the vaccine program.

The funding for the vaccine program is government money, which is tax payers’ money. The Liberal party may be the custodians of that money at the moment but they should be acting for all Australians, not just those who voted Liberal.

Labelling this announcement as a Liberal Party initiative undermines bipartisanship, which is so crucial to the success of Australia’s COVID response.”

Finlay also criticises Hunt’s response to Michael Rowland’s questions and in particular his personal attack on Rowland and the ABC.

“By digging his heels in, Hunt has made this more of an issue than it needed to be,” Finlay said.

“His aggressive response was unnecessary and disappointing – he should just have admitted it was an error of judgment. We should expect a higher standard of behaviour from our elected officials.”

CEO of the Australian Healthcare and Hospitals Association (AHHA), Alison Verhoeven, said that in her view it is “very inappropriate for the Liberal Party to place its logo on the COVID vaccine announcement”.

This is a national public health program funded through the tax system and widely supported by the major political parties, the state and territory jurisdictions who will bear much of the responsibility at least for the initial roll out, and by the private sector which will be engaged subsequently.

To turn it into political advertising and grandstanding is extremely disappointing.”

GP Dr Tim Senior said that he would welcome the billions of dollars it would save the Government if indeed it was Liberal Party officials who had paid for the vaccine, undertaken the relevant assessment and tendering processes and were planning to deliver it across the country.

“Because if it was taxpayers’ money, and the vaccine assessments were done by ATAGI and the TGA, and public servants in the Department of Health were responsible for the planning and delivery of the rollout, and the procurement of vaccine, (under the direction of a Minister, not a party official), then there would surely be an Australian Government logo on the announcement?” he asked.

Senior adds that the inclusion of the Liberal party logo is also misleading as the delivery of the vaccine will be done through Labor-run state/territory government services, as well as federal bodies.

The public health literature clearly states that vaccines should not be politicised by any side of politics. The politicisation of vaccination has intensified public partisanship around vaccination in other countries and harmed programs.

A recent article in The Lancet described the COVID-19 vaccination campaign “at risk” in many countries due to vaccine hesitancy and politicisation, stating:

…the success of this strategy relies on people’s acceptability of immunisation: what if people do not want the shot?

This question is not rhetorical; many experts have warned against a worldwide decline in public trust in immunisation and the rise of vaccine hesitancy during the past decade.”

The authors argue that “a crucial issue” for public health interventions is how to assure the public that recommendations reflect the state of scientific knowledge rather than political interests.

They state that this problem is exacerbated in times of crisis when there is “considerable scientific uncertainty and politicians—rather than experts—are the public face of crisis management”.

This is not the Government’s first “own goal” in this area.

The continuing COVID misinformation campaign from Government MP and Liberal Party member Craig Kelly is also undermining public trust in the Government’s public health advice. This campaign directly contradicts government policy and neither Hunt nor the Prime Minister appear able to shut it down.

This misinformation is having real consequences for health professionals involved in the COVID response.

As GP Dr Tim Senior wrote in Croakey this week:

We [doctors] rely on politicians and the political system to make…decisions fairly for the common good.

It is this that Craig Kelly undermines by spending his time posting misinformation.

It is this that Scott Morrison undermines when he allows Kelly to continue posting it.”

Hunt’s defence is inexcusable. It is also unnecessary from a political perspective.

Hunt genuinely deserves credit for his part in Australia’s (mostly) successful response to the pandemic (along with many others, most notably state/territory premiers, hospitals and health services, doctors and other frontline workers, Indigenous community leaders and the many nameless bureaucrats who have been working solidly on this issue for over a year).

He does not need to defend what was mostly likely a mistake or a misguided action by an over-zealous Liberal party campaign staffer.

Had he simply apologised and acknowledged the mistake, the issue would have gone away. He likely would have suffered no reputational damage and the potential for this to impact the vaccine program roll out would have been minimised.

As Croakey reported this week, in an analysis in the BMJ’s ‘COVID-19: The Road to Equity and Solidarity’ collection, Professor Fran Baum, from the Southgate Institute for Health, Society and Equity at Flinders University, and colleagues wrote:

Given the vital importance of trust during a pandemic, political leaders who promote transparent government are more likely to mount a more effective response.”

The roll out of the COVID vaccine is the next step in Australia’s response to the pandemic and the biggest public health program ever undertaken in this country.

Trading off trust in public health for partisan political gain risks undermining the roll out of this program and eroding our capacity to meet similar public health threats in the future.

Croakey approached health organisations involved in the roll out of the vaccine campaign and associated information campaign for input into this article. The Consumers Health Forum declined to comment. Croakey has not heard back from the RACGP or the Australian College of Nursing.

The tweet below was responding to a question about whether this politicisation risked undermining public confidence in the vaccine roll out. 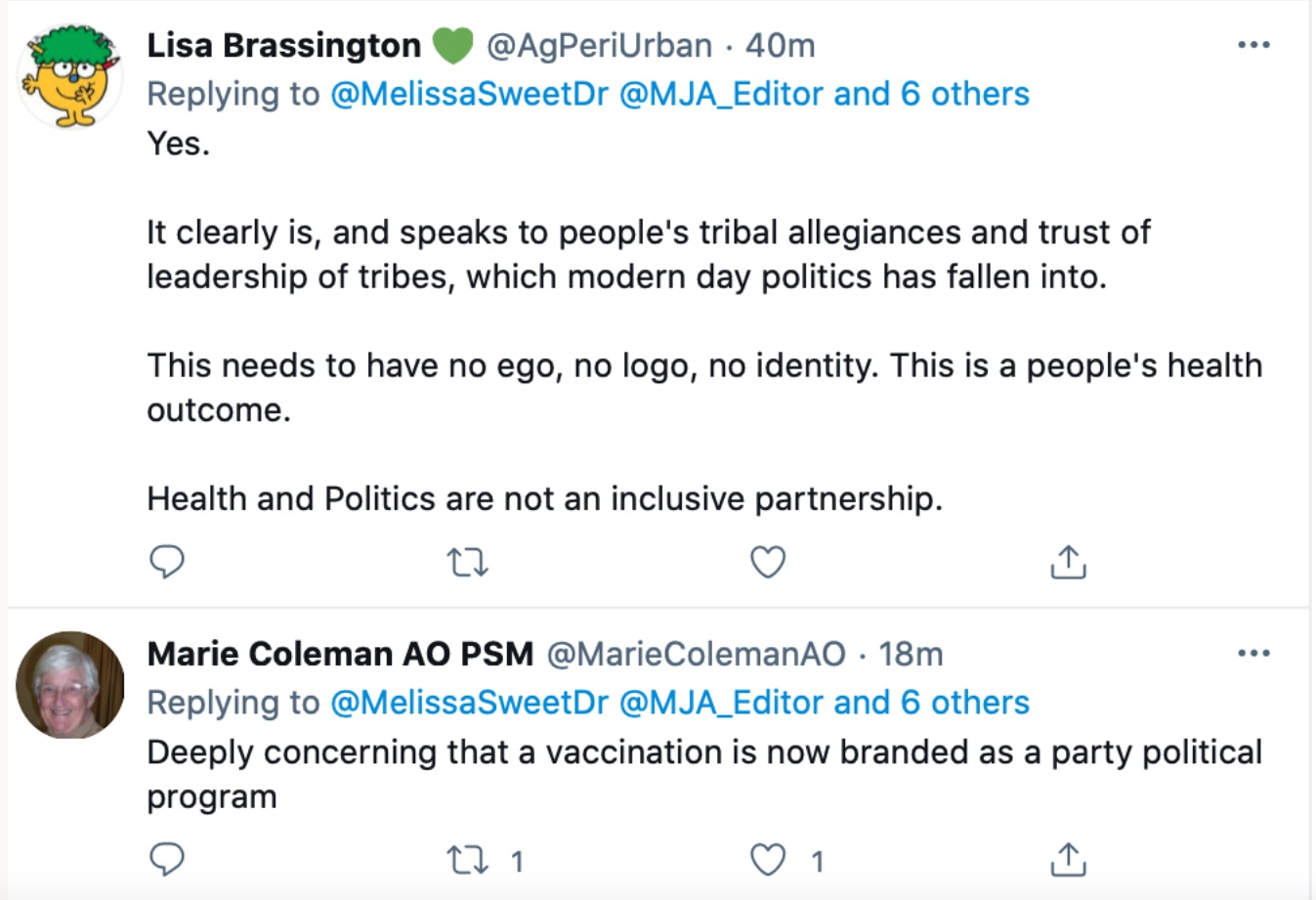 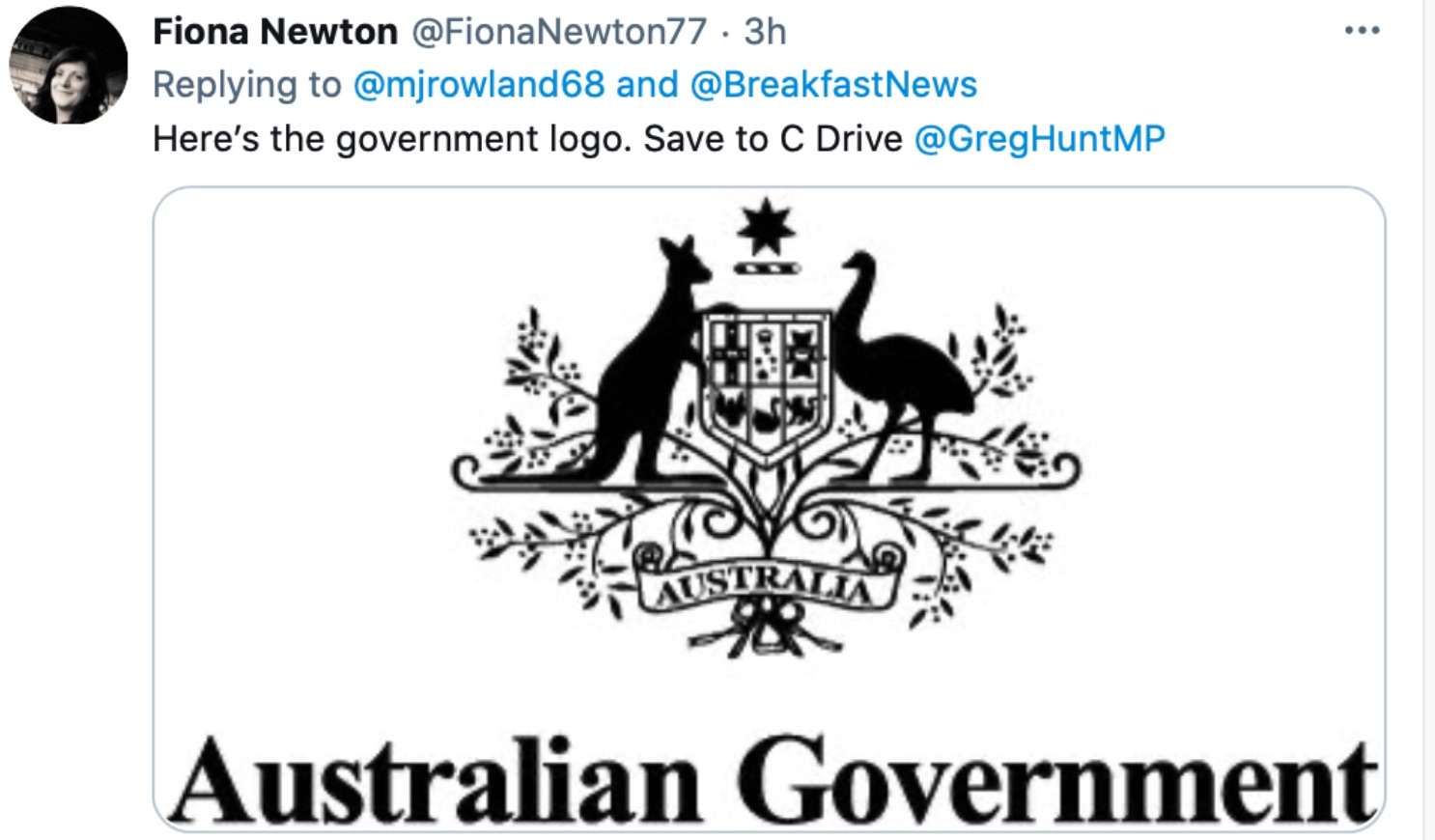