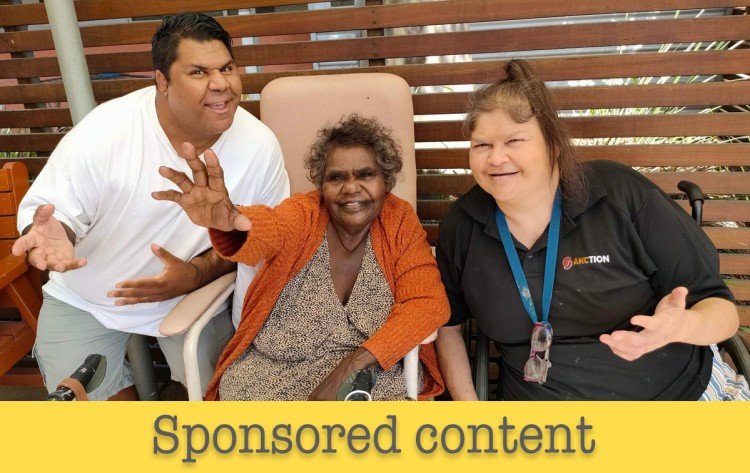 More than a patient: cultural and clinical knowledge on a healing journey

Introduction: This article is the third in a series sponsored by the Adelaide-based Aboriginal Kidney Care Together – Improving Outcomes Now (AKction) project.

In 2018, a funding cut put an end to a free shuttle bus that took Aboriginal patients in Adelaide to and from their dialysis treatments. Nari Sinclair, a Ngarrindjeri and Yorta Yorta woman, was furious about the implications, for herself and others.

Reliant on a wheelchair because both her legs have been amputated, Nari is unable to drive, catch public transport or take a standard taxi, and faced significant inconvenience and costs as a result of the funding cut. She knew of other kidney patients who were also hit hard.

Determined to fight the decision, Nari joined forces with Pitjantjatjara/Yankunytjatjara Elder Inawinytji (Ina) Williamson, a renowned artist who was forced more than a decade ago to move to Adelaide, away from Country, family and friends, for dialysis treatment that cannot be accessed in the Anangu Pitjantjatjara Yankunytjatjara (APY) Lands.

They got together for a yarn about how the complex clinical, cultural and social determinants impact Aboriginal people, families and communities affected by chronic kidney disease. For too long, says Nari, they have been poor cousins in healthcare – “shoved in one corner and forgotten”.

Nari and Ina were invited to a meeting with Kidney Health Australia and University of Adelaide researcher Dr Janet Kelly, who was working with kidney health professionals on a project to improve the quality and cultural safety of Aboriginal and Torres Strait Islander people’s healthcare journeys, particularly for those from remote communities.

“And it’s gone from there,” Nari says of how she, Ina and Janet worked with others to launch what would become the landmark Aboriginal Kidney Care Together – Improving Outcomes Now (AKction) project. It is transforming kidney health research and care from its base in Adelaide, on Kaurna country (read more in these two previous articles at Croakey).

Nari, 45, is now a Chief Investigator for AKction2, a project that has “flipped” the Western research model and recognises the cultural and clinical knowledge held by Aboriginal and Torres Strait Islander ‘patient experts’. Ina holds a position as Elder and mentor.

Dr Kim O’Donnell, a Malyangapa/Barkindji academic and public health researcher who is leading AKction2, says Nari and Ina have long been the epitome of this year’s NAIDOC theme – Get up! Stand up! Show up!

“It’s about speaking up … having the fire in their bellies to make a difference for others coming through,” says Kim. “That’s what Nari and Ina do.”

Thanks to that work, Ina Williamson, 69, is now able to do dialysis three times a week at Kanggawodli (meaning Caring House in Kaurna language), an Aboriginal-managed SA Health hostel in Adelaide.

In response to AKction’s early advocacy, Kanggawodli now has two dialysis chairs so Aboriginal patients from regional and remote areas can have their treatment in a culturally safe environment, the only Aboriginal hostel in Australia to have dialysis treatment onsite.

A cleansing fire burns in a central pit in the courtyard, wafting the scent of eucalyptus through the hostel. The dialysis chairs are not hidden away in sterile clinical surrounds but are positioned in the living area of the hostel.

Ina loves it, contrasting it with dialysis in a mainstream clinical setting where it “can be lonely, with no-one to talk to”.

“You see lots of people, lots of families,” she says. “You have a yarn, a laugh, a cup of tea, you can speak in Language.” Many of the staff are Aboriginal health professionals or non-Indigenous nurses and doctors who have spent time in remote areas, like Fregon, 1,100 kilometres north of Adelaide, where Ina is from. Coming to dialysis is a social outing as well as a treatment.

Ina was one of the first people from the APY Lands to start dialysis in Adelaide, and is a source of comfort and wisdom for the many who have come since, says Amy Graham, a Kaurna Narungga woman and AKction Research Coordinator.

“A lot of people will go to Ina and ask for advice … there is a lot of respect for her as a woman and Elder, they have big trust in her knowledge,” Amy says.

The AKction team brings together Ina and Nari and other Aboriginal kidney patient experts with Indigenous and non-Indigenous clinicians and researchers.

AKction’s four sub studies – Indigenous Governance, Kidney Journey Mapping, Patient Support Needs and Cultural Safety in Kidney Care – speak to the big system changes they envisage, based on the lived reality and priorities of Aboriginal kidney patients and their families, and the challenges for renal services in providing holistic, culturally safe care.

Over at the AKction office in Adelaide University, Nari Sinclair is meeting with fellow AKction Reference Group member Jared Kartinyeri, 34, a Ngarrindjeri and Wiradjuri man whose life also has been changed by kidney disease and transformed by the project.

They yarn about how tough chronic kidney disease can be, living it 24/7, effectively tied to a dialysis machine, often debilitated. Nari says it can sometimes become too hard, but her three children and two grandchildren keep her fighting, for her own health and that of broader Aboriginal and Torres Strait Islander communities.

Nari and Jared talk about family and community members, many in their early teens, who are terrified about the prospect of dialysis, “scared they’re going to die”. Jared says they are in desperate need of culturally appropriate information that is “given to us in a way that we understand, that we can take away and talk to our families about”.

They worry about the loneliness and isolation that Aboriginal people can feel in the mainstream services, particularly people from remote areas who “get lost in the system and in the city”, often falling between the cracks, missing dialysis and ending up being taken to hospital via ambulance, or the Royal Flying Doctors Service if they’ve headed back home.

Jared knows the risks, talking about the shock and dislocation of his own diagnosis in 2017. He had been feeling sick for two weeks and thought he had a stomach bug. He finally went to a doctor and within 24 hours was on dialysis.

“It was pretty quick and pretty serious,” he remembers. “My [creatinine] levels were so high that doctors and nurses were saying ‘how are you still living?’

But the treatment journey was also difficult. He felt alone and confused, sitting by himself day after day in a dialysis room. It was an uphill battle getting used to dialysis and the medication and then later managing the complexity of a kidney transplant.

“It was a pretty lonely experience there for a while,” he says. “I was pretty miserable.”

Then he was introduced to AKction and it has changed his life, connecting him with peers and clinicians, a community that has “widened my thoughts and vision of kidney health”.

In meetings with Ina, Nari and the rest of the team, Jared says that at first he was “very quiet, very shy”. “Now I’m very loud,” he laughs.

He has opened up, welcoming the role and responsibilities, planning to take AKction on the road to communities and to health and education expos. He loves being involved in an AKction project with fellow researcher Rhanee Lester, using recycled dialysis unit materials to make artwork that was gifted on World Kidney Day 2022 for display at Kanggawodli as well as at other renal facilities in Adelaide.

“I feel confident,” he says. “It’s the joy of being in AKction. Having the AKction team is really a safe space. It’s like a family.”

Amy Graham gets tears in her eyes hearing Nari and Jared talking about their roles and ambitions. She is moved by their humility given the huge impact of their work already.

“There was no hierarchy,” she says, comparing it to most other clinical settings she worked in as an Aboriginal Health Practitioner and Aboriginal Maternal Infant Care worker, where behaviour so often changes according to the status of the people in the room, and engagement with Aboriginal and Torres Strait Islander people is too often tokenistic.

“There’s none of that in AKction,” she says. “This is different, this is meaningful, this is actually going to make an impact, that’s what I love about it.”

Janet is also inspired by the positive difference that the eight Reference Group members have made as their confidence, sense of agency and authority have grown though collective action.

“We talk a lot in research about ethics and risk, but AKction is showing us how being involved in the right kind of decolonising research can be positive and healing, and how important it is for us all to counter past negative experiences that many Aboriginal and Torres Strait Islander people have of research,” Janet says.

“Instead of being subjects of research, these incredible, strong community members are now leading research, and taking it where it needs to go.”

That recognition is at the heart of AKction’s governance and process, embedded recently in its position descriptions for the project’s Chief Investigators.

They state upfront that AKction is a decolonising project that recognises strengths and embeds Indigenous ways of knowing, being and doing, where Aboriginal people are acknowledged as experts of their own journeys, actively supported in priority setting, analysis and decision making.

Unheard of in most Western work contracts is a focus on self-care. Responsibilities for Chief Investigators include “caring for self and families”. They are urged to:

Ina, Nari and Jared are celebrating what they have achieved so far in AKction but have big ambitions still.

They want more Aboriginal and Torres Strait Islander people in the kidney care workforce and envision Kanggawodli as a model of care for other areas. They would love to see it evolve into a centre of wraparound care for Aboriginal kidney patients, providing culturally safe housing, transport, podiatry, dental and eye care, all critical components of good kidney care.

They also want to address the complex reasons, including interpersonal and institutional racism, behind why Aboriginal and Torres Strait Islander people have rates of dialysis five times the rate of non-Indigenous people, but are ten times less likely than non-Indigenous patients to be added to the waiting list for a kidney donation transplant.

Nari reflects that, when she and Ina first joined forces a few years ago, she did not expect to become a researcher, much less a Chief Investigator on a major national research project looking to transform kidney care.

But she welcomes the authority the research role brings to her interactions with Western systems.

“I’m not just a pretty face sitting on dialysis,” she laughs. “I am someone who has got some knowledge.

“A nurse or doctor can say ‘I know how you feel’ – but they don’t know how we feel. Chronic kidney disease is a complicated disease, it’s more than clinical. It’s cultural, social, mental, spiritual. That’s where we come in.”

The series was conceptualised and sponsored by the AKction project, which had final say over the content.