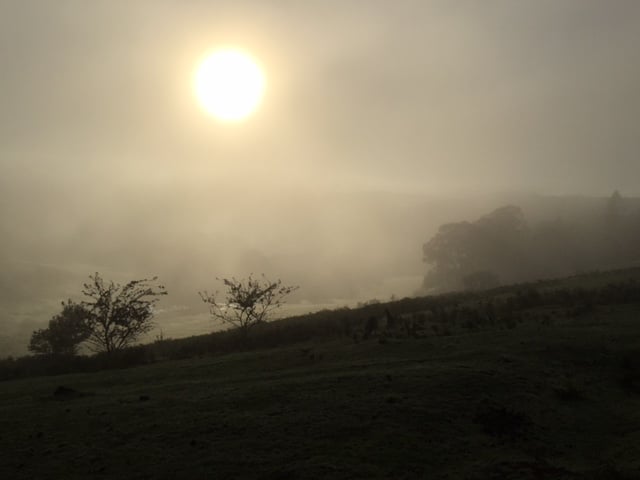 Putting a spotlight on rural health

All New South Wales Government policies would be assessed for their impact on human and environmental health under a recommendation from a NSW Parliamentary inquiry into rural, regional and remote health.

The NSW Legislative Council inquiry report, released last week, also addressed the lack of cultural safety of health services, calling for the NSW Government to mandate that each Local Health District (LHD) should have at least one Indigenous community representative on their governing board.

It calls for NSW Health and LHDs, particularly those in rural, regional and remote areas, to prioritise building their Indigenous workforce across all disciplines, job types and locations, and for extra funding to increase the number of Aboriginal Care Navigators and Aboriginal Peer Workers.

The report urges NSW Health to acknowledge the significant cultural barriers that telehealth poses for First Nations communities and work to ensure face-to-face consultations are prioritised.

All Ministers and Departments responsible

On the Health in All Policies (HiAP) recommendation, the report says the health of the people of NSW should be central to government decision making, and that “the pandemic has brought the importance of this to the fore”.

It says that government decision making should recognise “that community physical and mental health is a responsibility of all Ministers and Departments of government”, and that there should be “a whole-of-government ownership of health outcomes for people living in NSW”.

You can read a summary of the report’s 22 findings and 44 recommendations at this Twitter thread. The report includes many traumatic stories from patients, carers and health professionals about failures in access to care and poor quality, unsafe care.

Many of the findings and recommendations are relevant for other states and territories, and the report repeatedly stresses the need for national leadership and collaboration in efforts to reform health and medical education, training and service delivery to address inequities for people living in rural, regional and remote areas.

The report’s findings and recommendations underscore the importance of moving beyond the ongoing blame-games and cost-shifting between federal and state/territory jurisdictions to ensure health reform efforts that are squarely focused on the needs of under-served communities, rather than on political and professional self-interest.

In an election campaign where there is widespread frustration and anger at a lack of in-depth policy discussion, especially by some in the mainstream media, the report puts forward many critical policy matters for wider consideration.

However, the report has important gaps.

It is beyond strange that acknowledges the importance of the social determinants of health and health in all policies, but fails to deal with the climate crisis and its impacts on health and healthcare.

Nor does it make recommendations around addressing poverty, food/housing/employment insecurity, and inadequate social security payments. Addressing these issues would make a real difference to health for rural, remote, regional communities.

It also beggars belief there is no discussion around the justice system – police, prison and other detention facilities – where there is so much inadequate and dangerous health ‘care’. These are important rural/regional/remote health concerns (see our #RuralHealthJustice series, for example).

Also lacking is consideration of the historical context.

What difference might it have made to many of the concerns identified by the inquiry if the Abbott Government’s 2014 budget had not abolished Health Workforce Australia, the National Partnership Agreement on Preventive Health, and the Australian National Preventive Health Agency, while taking a “wrecking ball” to Federal/State collaboration on health reform?

The inquiry received 720 submissions and 29 supplementary submissions, and held 15 public hearings between March 2021 and February 2022, visiting seven locations and hearing from 220 individual witnesses.

“Many of these written and oral accounts spoke of health care professionals doing their best with limited resources,” the inquiry reported. “However, in numerous cases the perceived standards of care and the timeliness with which these services were delivered was considered to be below or of a very poor standard.”

The report includes dissenting statements from Emma Hurst, MLC, for the Animal Justice Party, who says it is “incredibly disappointing that both the Liberal-National Government and Labor Opposition have failed to support a recommendation to mandate minimum staffing ratios for nurses in regional, rural and remote NSW”.

The Committee heard damning evidence about the nurse understaffing crisis in regional, rural and remote hospitals. We heard that many facilities are operating with bare minimum nursing staff, often without a doctor on site.

We heard that hospitals are so understaffed, nurses are sometimes forced to ask kitchen staff to watch over patients. We heard that nurses feel they have unsafe patient loads, particularly when emergency situations occur, causing significant stress for nurses and potential risks to patient care.”

In another dissenting statement, Cate Faehrmann, MLC for The Greens, said she strongly supported the report but was disappointed the Liberal, National and Labor members of the committee did not support the Greens’ amendments for mandated safe nurse-to-patient ratios, as advocated by the NSW Nurses and Midwives Association (NSWNMA) and their members.

“I, for one, was convinced by the evidence presented by frontline healthcare workers and their unions of the urgent need to mandate shift-by-shift staff-to-patient ratios to ensure safe staffing and working conditions and patient safety,” she said.

Faehrmann was also disappointed by the lack of support for her recommendation that the NSW Government establish and fund an independent statutory Rural and Remote Health Commissioner to report the Minister through a board comprised of representatives of rural and remote communities including residents, general practices, local government, community and First Nations organisations.

The Government’s statement is here, and the inquiry’s report notes the initiatives below.

On 20 December 2021 the NSW Government announced the appointment of Bronnie Taylor MLC as Minister of the newly created Regional Health portfolio.

On 8 April 2022 Minister Taylor announced the establishment of a new Regional Health Division in NSW Health, to be led by a Coordinator-General reporting directly to the Secretary of NSW Health.

On 14 April 2022 the NSW Government called for expressions of interest from members of the community to be appointed to the Regional Health Ministerial Advisory Panel.

The report states that healthcare and social assistance industry is the largest employment sector in regional New South Wales, comprising 14.5 per cent of the regional workforce.

There were 41,916 registered health professionals based in regional New South Wales in 2020, including 5,694 doctors, 24,259 nurses and midwives and 5,061 full-time equivalent allied health workers.

Almost two million people live in rural, regional and remote NSW – approximately 24 percent of the state’s population. The population has grown annually by seven percent since 2013.

Compared to Greater Sydney, the population of regional New South Wales is older, and it is predicted that by 2036, residents aged over 75 will become the largest demographic in rural, regional and remote NSW and that they will make up 15.9 percent of the population by 2041. 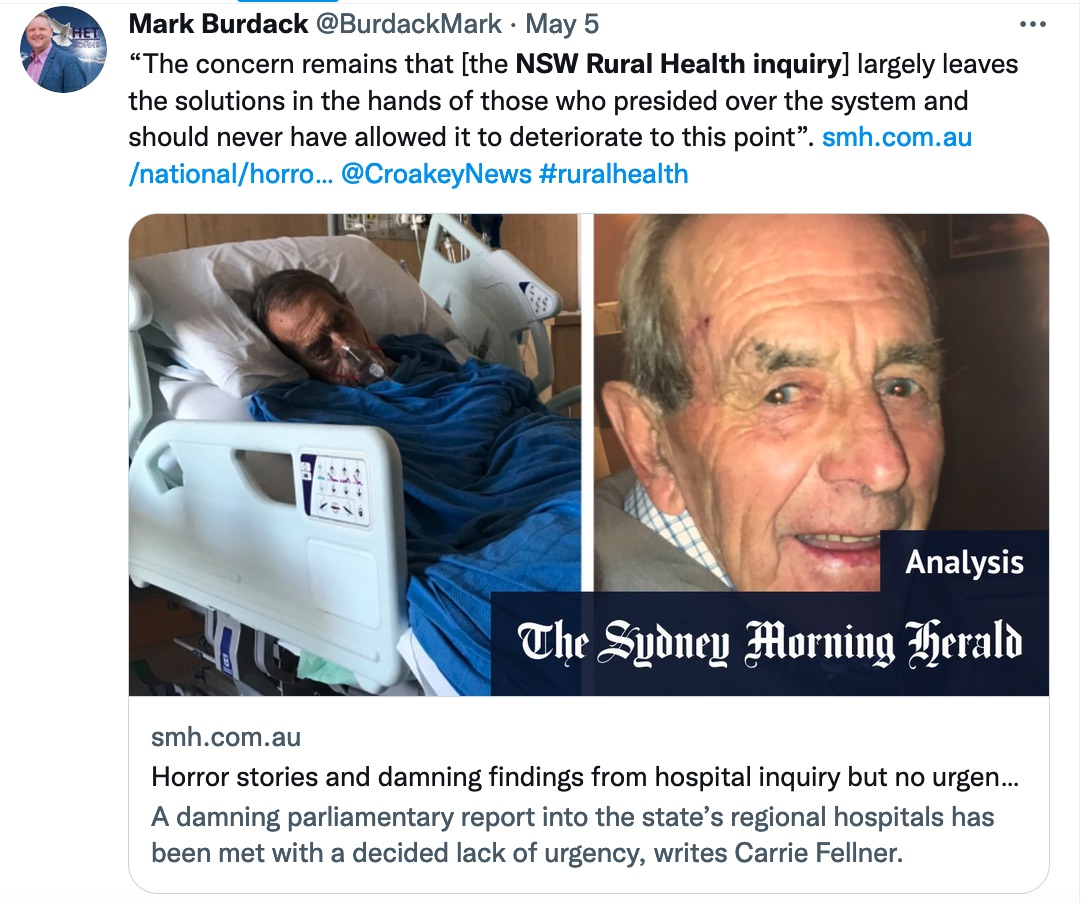 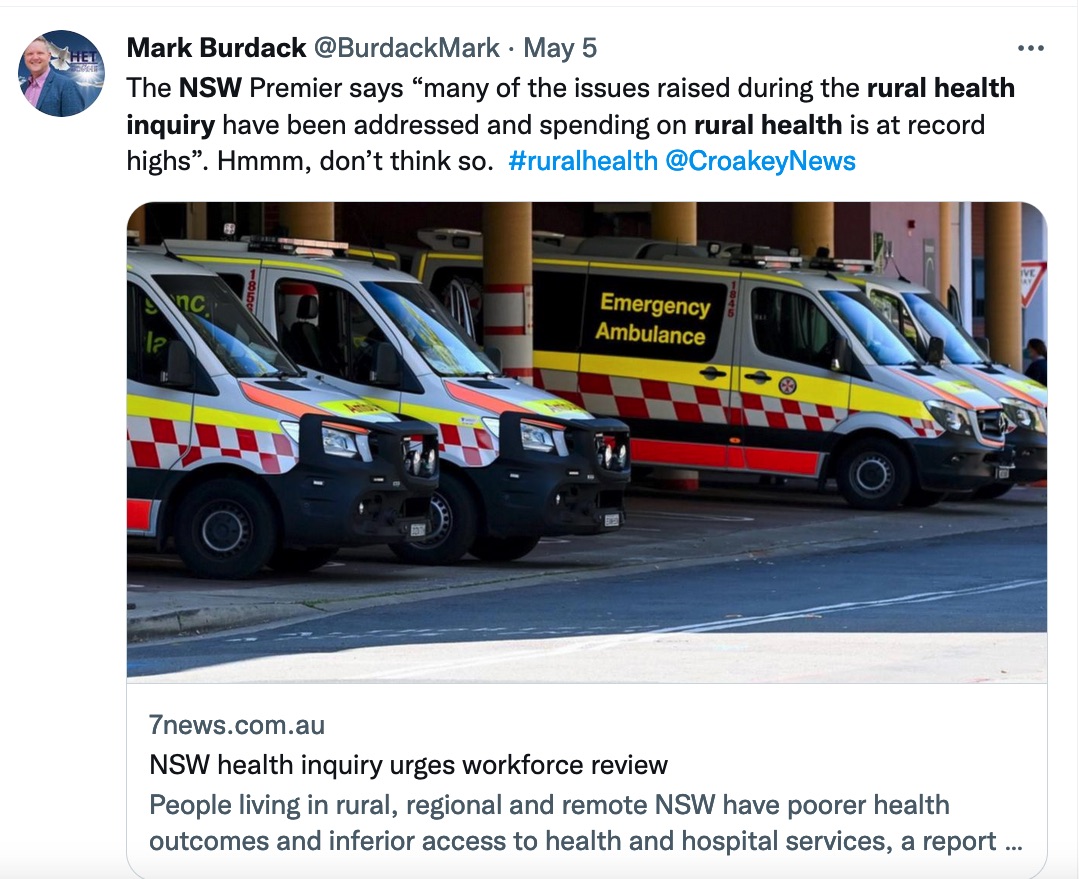 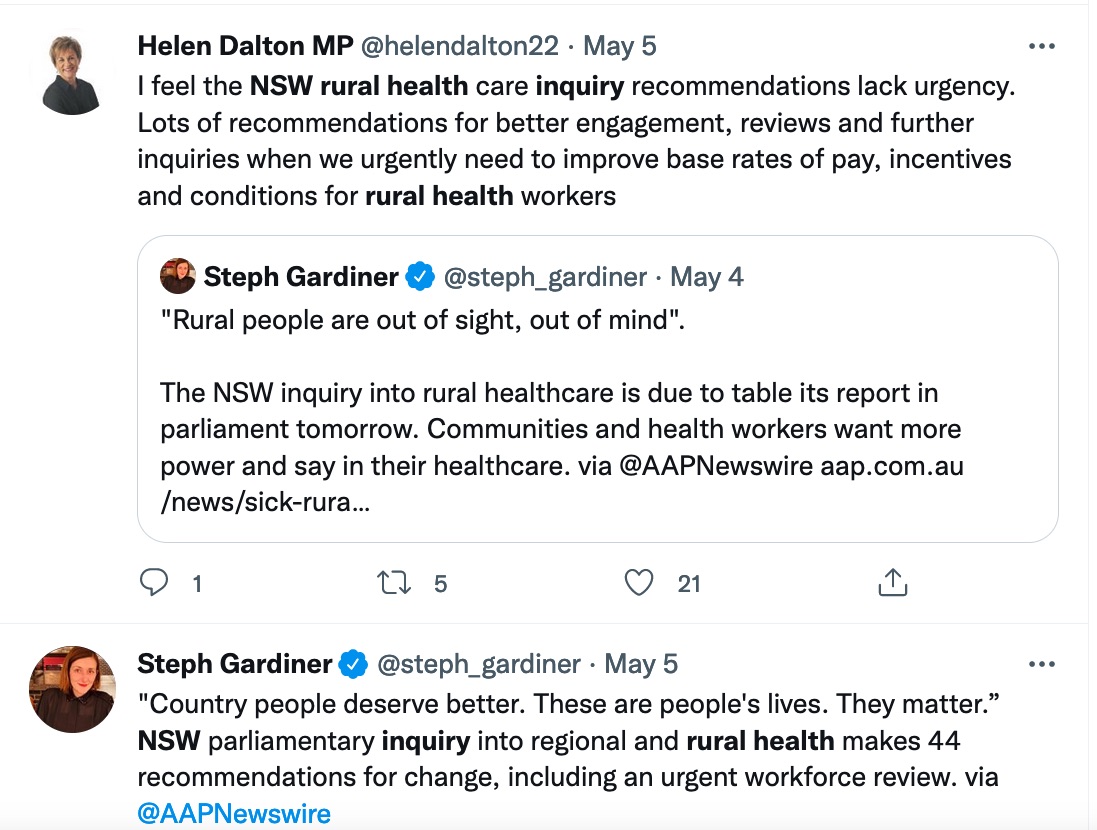 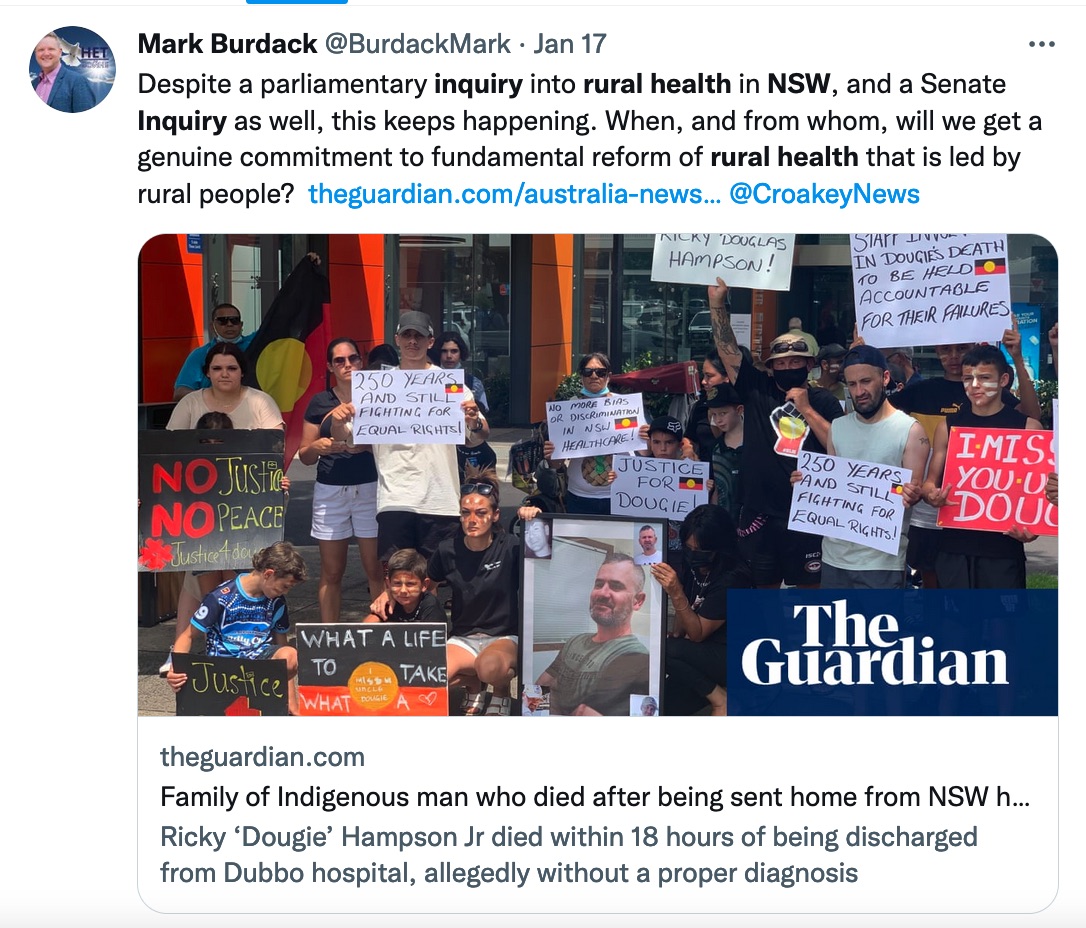 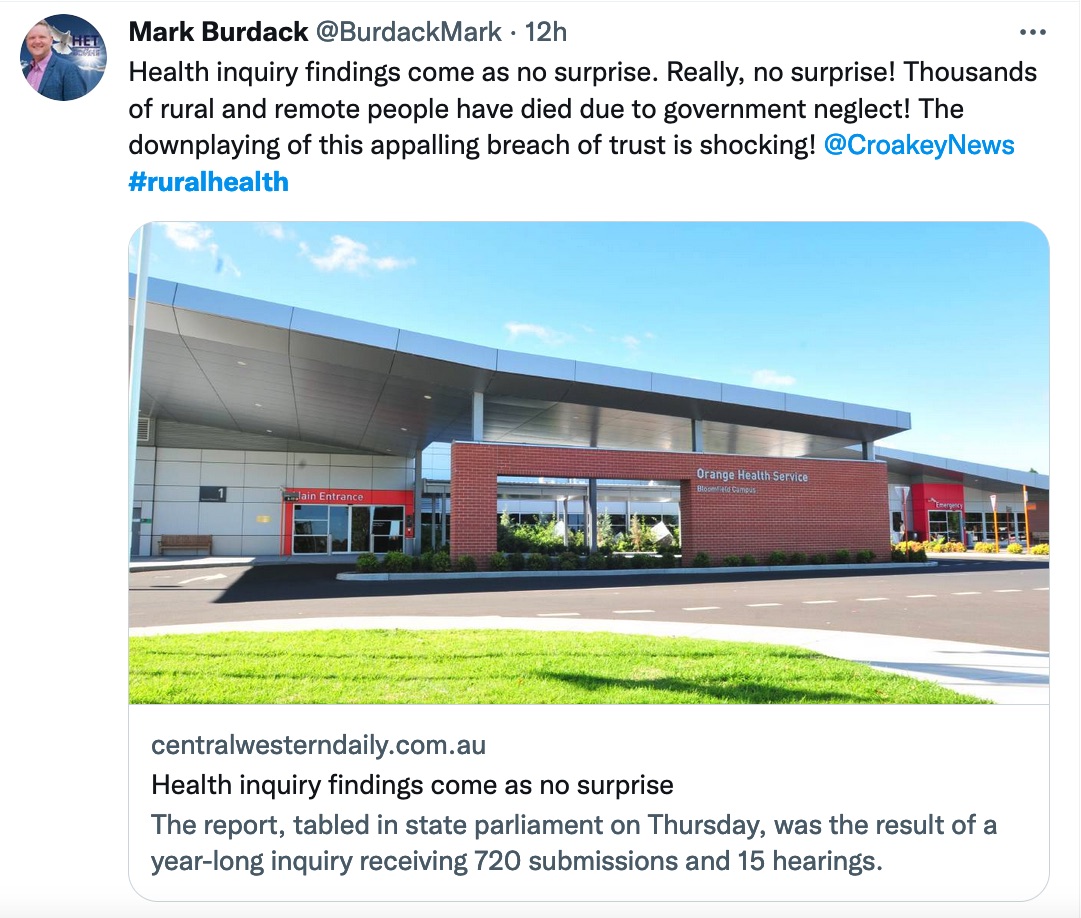