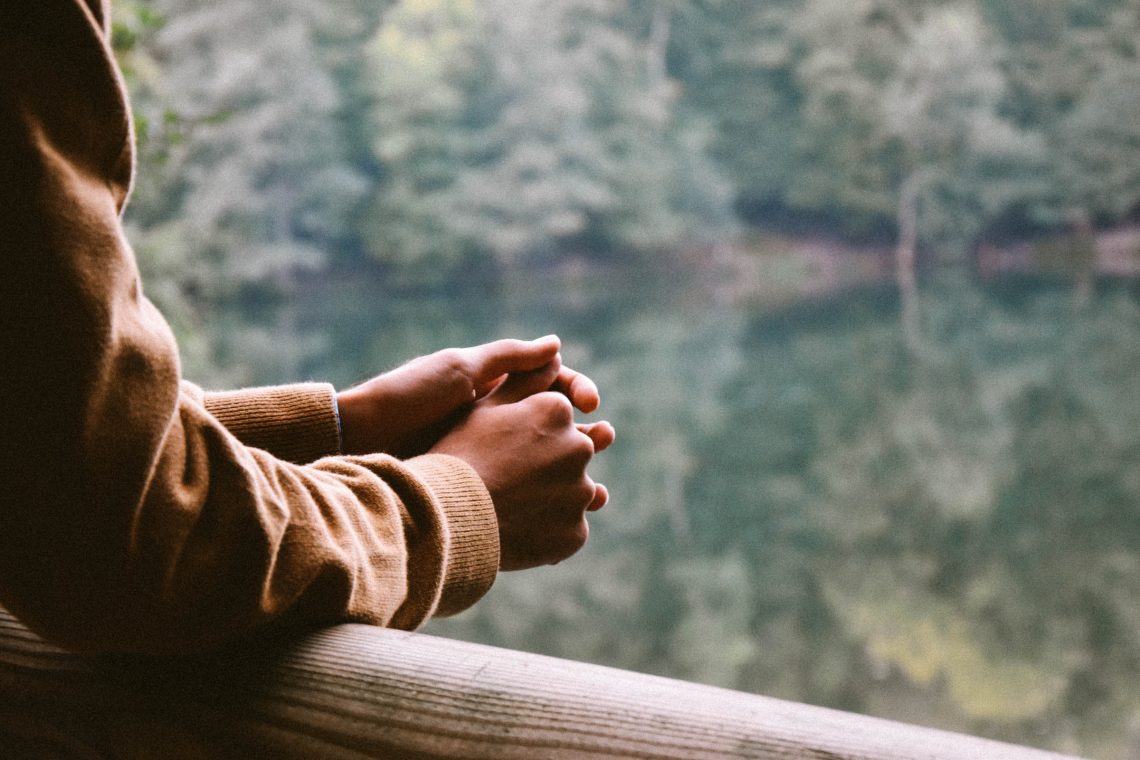 After all this time, still waiting for meaningful mental health reform. Photo by Ümit Bulut on Unsplash

Scott Morrison has called the final report of the Productivity Commission’s inquiry into the economic impact of mental ill health “the most comprehensive report of its kind” ever produced in Australia.

He’s probably right. This huge report draws on a record number of submissions, a series of roundtables and public hearings in all states and territories, and input from a range of eminent experts. It makes more than one hundred recommendations to help the one in five Australians experiencing mental illness every year. It provides a strong economic case for reducing the direct economic costs of mental illness — between $43 billion and $70 billion each year — and the additional $151 billion lost to disability and premature deaths.

So why do I have a feeling that the report’s recommendations might go nowhere?

The fact is that we have thirty years of evidence that official inquiries into mental health — thirty-two of them between 2006 and 2012 alone, according to one observer — rarely lead to major changes. The pattern goes something like this:

And so the cycle continues, as it has many times over the past thirty years, both federally and in the states. Meanwhile, Australia spends more than ever on mental health services with no sign that outcomes are improving. A staggering one in eight Australians are now taking antidepressant medication (the second-highest rate in the OECD) and our age-standardised suicide rate has increased by 13 per cent over the past decade.

One way to read the Productivity Commission’s report is to treat it as a comprehensive record of the mental health system’s failure to fix policy and service-delivery flaws we’ve known about for decades.

Twenty-seven years after the release of the Burdekin report on the human rights of people suffering mental illness, hospitals and correctional facilities are still routinely discharging people with mental illness into homelessness.

Twenty years after the publication of the first National Suicide Prevention Strategy, half of all people discharged from a hospital after a suicide attempt don’t receive any follow-up.

Fourteen years after a Senate inquiry into a national approach to mental health found that “services have failed to meet the standards Australians should now, after many years of inquiry and reform, be able to expect,” mental health consumers still describe their experience of seeking treatment in hospitals as inefficient, traumatising, inadequate, stigmatising and distressing.

If this latest report somehow defied the odds, we would all be better off. Its conceptualisation of the problems and its recommendations would dramatically improve how mental healthcare is provided across Australia. Its main focuses are worth highlighting:

Robust economic modelling: The report applies a sharp economic lens to mental health. Expenditure of $4.2 billion per year, it concludes, would deliver an annual $18 billion in benefits, mainly from improvements in people’s quality of life, plus a further $1.3 billion each year from increased economic participation and productivity.

Prevention: While prevention is not the report’s focus, the Productivity Commission goes as far as it can within its terms of reference to stress the need for more and better preventive health measures, including actions to reduce trauma in early childhood and tackle workplace stress and bullying.

A broader approach: The need to work across portfolios — including within the justice system, policing, housing, education and income support — is a key thrust of the report.

Shared responsibility: Another strong theme is the importance of distributing responsibility for mental health across the government and non-government sectors, with key roles for workplaces, educational institutions and the business community.

Increased consumer focus: All mental health inquiries pay lip service to the importance of consumers and carers, but this report takes a more nuanced approach, recognising the complexity and diversity of these groups and the many ways they can engage with mental health policies, programs and services. It suggests tangible engagement strategies like co-design and co-production and recommends the funding of new national mental health consumer and carer peak bodies.

Technology: New modes for delivering mental healthcare are highlighted as a way of meeting increased demand for treatment by reducing the need for expensive face-to-face services.

The report also recommends structural changes across the system in two areas: accountability and governance. A lack of accountability was the major governance issue raised by participants in the consultation process, it says. The current mechanisms for holding jurisdictions accountable for mental health outcomes are “weak and poorly developed,” with poor integration of consumers and carers, and the absence of a “culture that requires demonstration of program impact and evaluation.”

In discussing the need for better evaluation, the report questions the value of big-spending mental health programs like the recently expanded MBS-funded Better Access program and the youth-targeted Headspace centres.

It also questions the consistency of GPs’ performance in providing mental healthcare. Some GPs do an excellent job, it says, but too many lack knowledge and skills in mental health, and rely too readily on medication as a treatment option. GPs need more competency in “identifying risks, diagnosing conditions, assessing and recognising the physical health consequences of prescribed treatments, and connecting people with other services (including online mental health services, allied health services and non-clinical services such as counsellors).” A “rigorous” evaluation of the Better Access program is “urgently needed.”

In relation to Headspace, the report finds a mismatch between the needs of consumers and the services provided by these centres. “About half of young people presenting at Headspace centres have either mild, moderate or no symptoms of mental ill health,” it says, “and about half have low or moderate distress — indicating that low-intensity services may well be suitable for a many of these young people.” But “among young people with mental ill health who received an assessment, four out of five went on to receive individual therapy (which is not a low-intensity service).”

To improve the performance of mental health programs and policies across the board, the report argues for a “culture of evaluation.” It recommends that the National Mental Health Commission should drive the dissemination of this culture, on the basis that it already has a mandate to work across all areas with an impact on mental health and that the cost of expanding its role would be lower than establishing a new body. To strengthen the independence of the NMHC, the report recommends making it a statutory authority.

In relation to governance, the report argues that “the scale and complexity of many mental health policy issues has thus far exceeded the design of national committee structures.” Distortionary and unclear funding arrangements are undermining the efficient use of resources and causing an overreliance on Medicare-funded and hospital-based services.

As well as recommending a new whole-of-government National Mental Health Strategy, the report recommends that federal, state and territory governments establish a Special Purpose Mental Health Council to facilitate mental health reforms across health and non-health portfolios. It suggests several strategies to improve cooperation between Primary Health Networks and Local Hospital Networks, including a requirement for comprehensive joint regional planning and formalised consumer and carer involvement, to be overseen by the NMHC. If that doesn’t work, the report recommends a more radical approach involving new Regional Commissioning Authorities to pool and administer the networks’ mental health funds.

As I said, these are all excellent ideas. But the question remains: does the current government have the appetite for what are major structural changes?

Based on previous form, it is unlikely that Scott Morrison and his colleagues will take on the report’s bolder cross-sectoral recommendations.

As Nicole MacKee points out in Croakey, recent government actions — including the $1.2 billion settlement of the robodebt case and the vote by Australia’s attorneys-general for the age of criminal responsibility to remain at ten, despite a 2019 United Nations Committee on the Rights of the Child recommendation of fourteen — demonstrate a lack of commitment to recognising the mental health effects of decisions made in other portfolios.

But the Government might be willing to consider some of the more narrowly focused recommendations, and even to allocate significant funding if it is confident of success, both practically and politically.

The Prime Minister has committed to responding to the report in next year’s pre-election budget. With big spending measures needed to drag Australia out of a COVID-induced recession, some serious mental health funding could be on the agenda. But there is also a risk that this opportunity will be wasted and the fruitless cycle of failed reform attempts will continue.

It’s easy to point the finger solely at governments, and of course successive governments at all levels could and should have done more. But the mental health sector, particularly the providers of mental healthcare, also bears some responsibility for the repeated failures in this area. It’s hard for any government, no matter how committed, to make progress in a policy area in which the stakeholders are divided, disorganised and antagonistic and put their own interests above those of the sector as a whole.

This report and next year’s budget provide the best chance for decades to break the cycle.

With budget priorities for 2021–22 likely to be locked in around March next year, the sector has only three months to take advantage of the opportunity. Only if it comes together to agree on key priority areas, acknowledges the limitations of current programs and services, stops the in-fighting (or at least keeps it behind closed doors), and gives government a realistic plan for reform (and commits to backing it if the budget delivers most of the plan) is there a genuine chance to achieve generational change in mental health.

If not, then the Government’s only realistic option will be to make a tokenistic response to the report, set up another body with inadequate funding and insufficient support, and hunker down until a new health minister starts the doomed mental health reform cycle again.

Also see this Twitter thread by Jennifer Doggett, who is a Croakey editor and health policy analyst

This article was first published at Inside Story 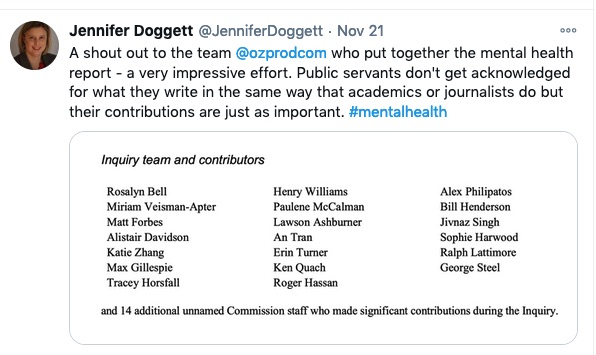 PrevPreviousChildren may transmit coronavirus at the same rate as adults: what we now know about schools and COVID-19
NextVictorian Budget widely applauded, but Aboriginal legal support lackingNext