Introduction by Croakey: Croakey contributing editor, Associate Professor Lesley Russell, has undertaken a comprehensive investigation into whether the Medical Research Future Fund (MRFF), much hailed by the Federal Government, is living up to its promises.

Last week, in the first of a two-part investigation, #MRFFtransparency looked at funding sources, expenditure, reporting systems and priority setting.

Part 2, published below, addresses what is needed to ensure that the MRFF delivers the best value and outcomes.

In Part 1 of this analysis, I looked at what we know about the funding of the Medical Research Future Fund (MRFF) and the expenditure of those funds.

In Part 2 I look at what is needed to ensure that the MRFF delivers the best value and outcomes.

As previously noted, the $20 billion that makes up the capital of the MRFF is savings from the Health and Indigenous Affairs portfolios.

I argue this increases the onus on the MRFF to show that it is privileging research and translation efforts to improve the health of all Australians and especially the lives of Aboriginal and Torres Strait Islander people.

In particular, there must be safeguards in place to ensure that MRFF funds are not used for political purposes and that decisions about funding priorities and the support of specific research and organisations are not subject to political interference or used to support commercial priorities over those of public health.

What the MRFF recognises is needed

In the 2016-18 Report to Parliament, the Australian Medical Research Advisory Board (AMRAB) highlighted a number of areas where work was needed. These included:

This is especially important for critical, time-sensitive areas such as research on coronavirus and COVID-19 and the need for a prioritised national research strategy for clinical trials has been highlighted by others.

Given that this research is funded using taxpayers’ dollars, this should be an essential criterion. It is especially important that there is appropriate and respectful consultation with the Indigenous research and health sector and Indigenous communities when work is undertaken in this area.

Funding for the indirect costs of research, including MRFF research, is provided to universities through the Research Support Program. This was given a one-off injection of $1 billion in 2020-21 but funding in subsequent years is below original projections.  Research Australia says this “represent a real and continued threat to the capacity of our universities to undertake vital health and medical research”.

Other issues of concern

A lack of focus on the health impacts of climate change

As previously noted, it is staggering that examination of the impact of climate change on health is not deemed a research priority.

Aside from funding provided in 2017 to the Australian Prevention Partnership Centre (APPC) and projects on the impact of bushfires that were funded in 2020, there is nothing for this important work that is already affecting the health of Australians and will become an ever more pressing health threat.

It’s tempting to see this as a consequence of political interference or political correctness on  the part of AMRAB.

The Australian Society for Medical Research (ASMR) has expressed concerns that the MRFF disbursement processes are flawed, with a lack of transparency around funding calls, how funding is allocated, and how the peer review process is applied.

The ASMR reports that data tabled at Senate Estimates last year showed that 65 percent of all MRFF funding disbursed to the end of January 2020 was not subject to a competitive process. Some funding calls have turnaround times as short as two weeks.

The Australian National Audit Office is currently investigating the Department of Health’s management of the MRFF using three criteria:

This report is due next month (September 2021).

MRFF funds distributed for research often travel through a number of hands.

For example, research translation funding might be selected by the Business Grants Hub of the Department of Industry, approved by the Department of Health, handed to MTPConnect, then further distributed. What are the costs involved?

The only management costs that are detailed are those that the Department of Finance pays the Future Fund for management of  MRFF capital investment (see Table 1 in Part 1 of this analysis).

Large sums of money have been committed to the Research Missions but there does not appear to be any mechanism to integrate and coordinate these research efforts.

For example, there are established links between chronic diseases such as cardiovascular disease and cancer, healthy ageing and mental health that should be reflected in how research in these areas is conducted and translated into practice.

The importance of translational research

Translational research efforts are critical in ensuring that MRFF research is available to deliver benefits to the Australian population and internationally.

Most of this work will be undertaken by MTPConnect and there are no public reporting requirements.

Nor is there any indication about how the work undertaken by MTPConnect using MRFF funds is integrated with that of the Biomedical Translation Fund.

It makes the case that the status quo needs ramping up, using all the stakeholders working in concert rather than individually.

When this work involves Aboriginal and Torres Strait Islander people there are additional safeguards and conventions that must be observed.

As the Lowitja Institute outlines, knowledge transfer must be embedded in research projects from the beginning, and it is critical that Aboriginal and Torres Strait Islander committees, organisations and researchers take the lead in the knowledge transfer space.

I am concerned that there are no structures in place to ensure that this happens routinely with respect to projects funded by the MRFF.

The biomedical research environment in Australia is currently fraught with difficulties and access to funding is increasingly difficult. Has MRFF funding improved the situation?

As Figure 1 (below) shows, the Budget Papers reveal that funding for the NHMRC has grown very slightly over recent years and is projected to grow at about one percent annually over the forward estimates. In effect, NHMRC funding will continue decline in real terms as it has done for many years.

But the combined NHMRC and MRFF budget still only represents 0.53 percent of the total health expenditure in the Federal Budget. As the Australian Society for Medical Research notes, this is well below the three percent that would bring Australia’s health and medical research spending into line with other OECD countries. 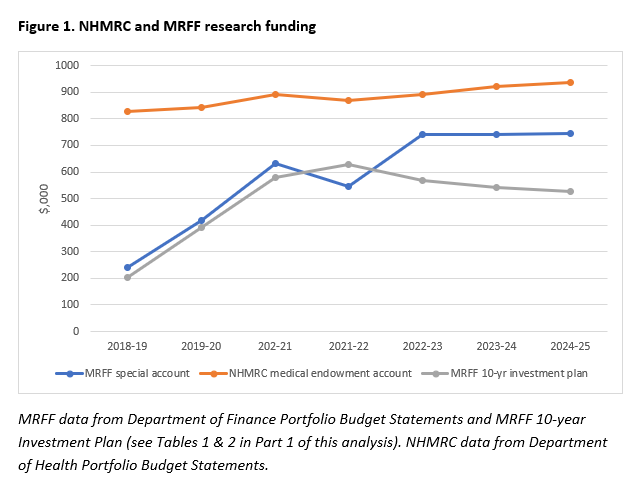 A breakdown of NHMRC funding over the years 2000-2018 on the Australian Institute of Health and Welfare site (see Figure 2) shows that funding for basic science has declined precipitously, funding for clinical medicine and science has increased, funding for public health has remained consistently low, and funding for health services research has increased slightly from very low levels. 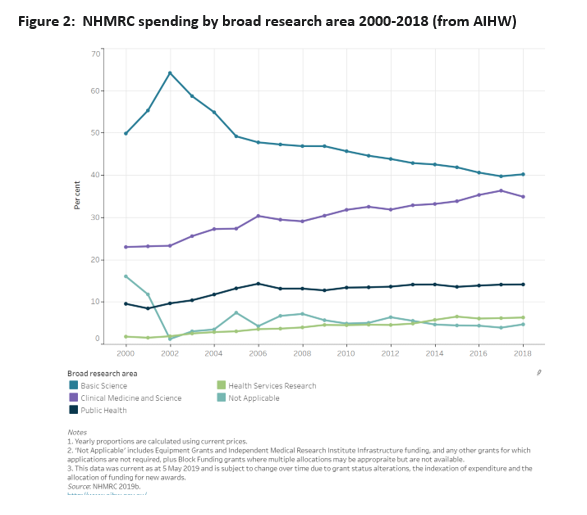 PrevPreviousOverdose deaths remain stubbornly high: we need to do more to save lives
NextLock down smarter, not harderNext