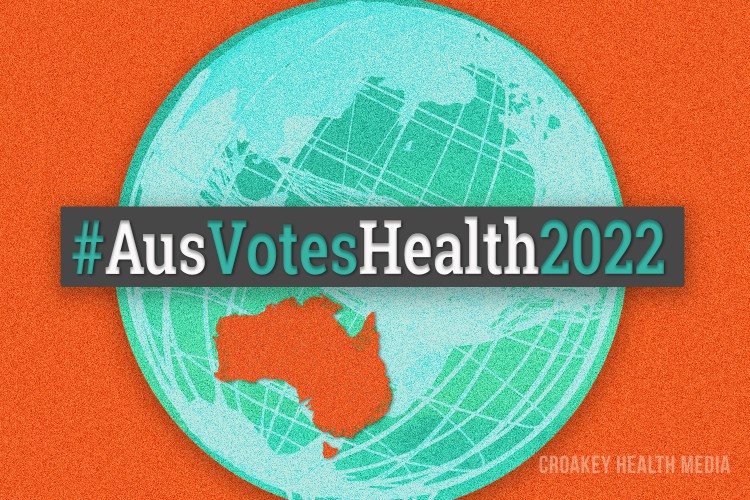 Putting the focus on health at the Federal election

The Election Wrap (part one)

Each Wednesday during the election campaign, Croakey plans to publish a rolling wrap of health and election news. We welcome submissions and suggestions.

Labor: urgent care initiative; and support for nurses and midwives

In its first major health campaign announcement, Labor has announced plans to pilot 50 new urgent care centres with the aim of relieving pressures on hospitals.

Writing at The Conversation, health policy analyst Professor Stephen Duckett says the model is innovative, welcome and yet to be evaluated. The Royal Australian College of General Practitioners welcomed the proposal.

Health policy analyst Associate Professor Lesley Russell said: “I am very supportive of the provision of ‘GP-style’ casualty services – we currently have one such (paid for by the NSW Government) in Balmain. Such services only work optimally if they are linked into local GPs, ambulance service and hospitals and are open and fully staffed 24 / 7.

But it must be seen as a Band-aid solution to an acute care problem that requires (1) substantially more investment in primary care, especially services for the chronically ill, (2) increase of federal share of public hospital funding to at least 50 percent (3) more sub-acute / step down care places and (4) investment in provision of primary care services in aged care.

As with every healthcare issue in this election – workforce is the key issue here. Would be perfect use of Nurse Practitioners and Physician Assistants.”

Labor also announced a new National Nurse and Midwife Health Service to provide nurses and midwives with a range of personalised and professional support services to help them manage burnout and stress. The Australian Nursing and Midwifery Federation welcomed the announcement.

As with previous elections, the Greens brought a plan for Medicare to cover dental care, to be funded by billlionaires and large corporations paying their fair share of tax.

Associate Professor Lesley Russell said: “It’s good to have dental care on the election campaign agenda, but I fear that the Greens’ proposal is a big step taken too far in the first instance.

The Greens (who might hold some sway in a new Parliament but will never be in government with budget responsibilities) have the luxury of proposing a large scale program with little or no indication as to how this will be phased in and a funding mechanism that is very unlikely to fly, given the “no new taxes”commitment / almost commitment from the major parties.

It is costed on the basis that 80 percent of dental services will be “routine” but, especially in the early years of such a program, there will be a pent-up demand for more extensive and expensive services, crown and dentures. There needs to be formal guidelines about what is “routine”or “essential” – and where do braces sit in this system?

The program apparently also includes free university places for dental students (it should be noted that it costs more to educate a dental student than an medical student) but this will, on its own, not address the current situation which sees a surfeit of dentists in metropolitan areas and a scarcity elsewhere.”

Health and aged care policy analyst Charles Maskell-Knight said: “The fact that dental treatment is not available under Medicare is an anachronism with increasingly poor consequences. Public dental services are overwhelmed with demand from pensioners and other concession card holders, with lengthy waiting times. They are increasingly focused on emergency care rather than prevention.  Other low-income groups who do not qualify for public dental care face large out-of-pocket costs, and often defer or forgo treatment.

However, simply extending Medicare to cover all dental services for everyone at once is not desirable. The boundary between dental treatment needed to avoid disease and maintain a functional dentition, and cosmetic treatment intended to enhance dental appearance, is not clear at the margins.  While taxpayers should not pay for cosmetic treatment, the Commonwealth government does not currently have the expertise to draw these distinctions in regulation.

It would be much more sensible to have a staged approach, with a dental benefits scheme for pensioners and concession card holders – and possibly other low-income groups – co-funded with the states. After operating this for several years and resolving teething problems, it could then be extended to other demographic groups.”

The Australian Medical Association launched a campaign to “modernise Medicare”, based on the medical homes model, and criticised both the Government and Opposition’s health policies.

Charles Maskell- Knight commented: “The tag line for the AMA’s “plan” to modernise Medicare is ‘more time, more care, more health’.  The fourth part should be ‘more money for doctors’, because that it what most of the measures involve.  Of course Medicare should be modernised, but it is not simply a matter of paying GPs more.

A modern Medicare would ensure that patients with chronic disease under the care of a specialist are protected from egregious out-of-pocket costs.  It would ensure that people can access the allied health services they need to complement their medical treatment at the level that its needed and without substantial co-payments.

It would be extended over time to over dental services. It would even acknowledge a role for nurse practitioners to work at their full scope of practice. Any plan to modernise Medicare needs to address issues other than GP remuneration.”

Voter participation is a key public health issue, and it is especially important to ensure young people and Aboriginal and Torres Strait Islander people are enrolled to vote. The Northern Land Council has blasted the Australian Electoral Commission for not doing more to boost enrolment rates in remote areas. 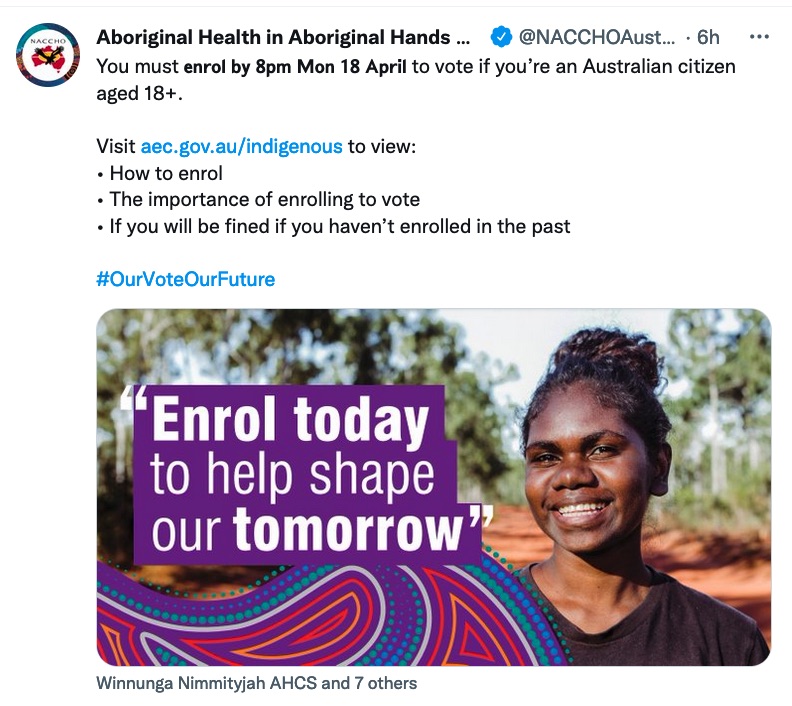 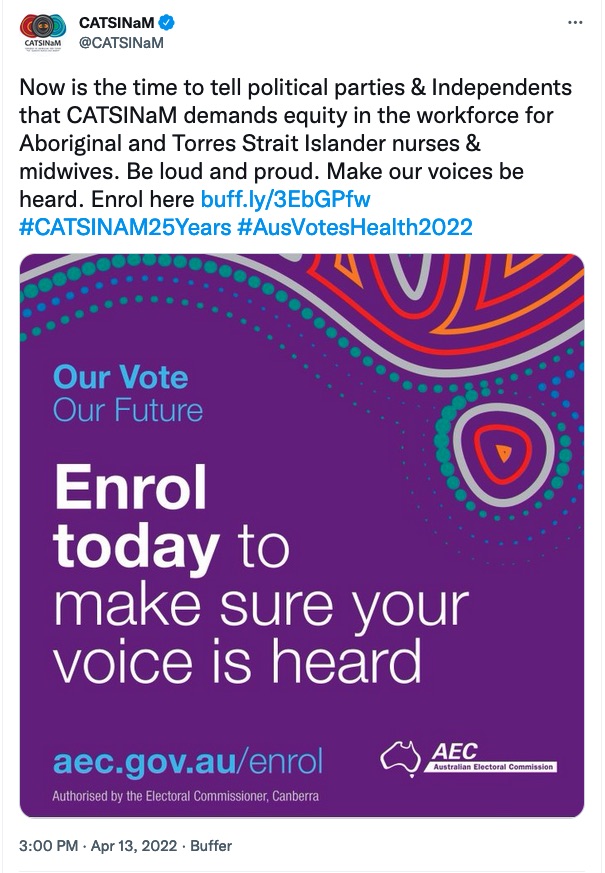 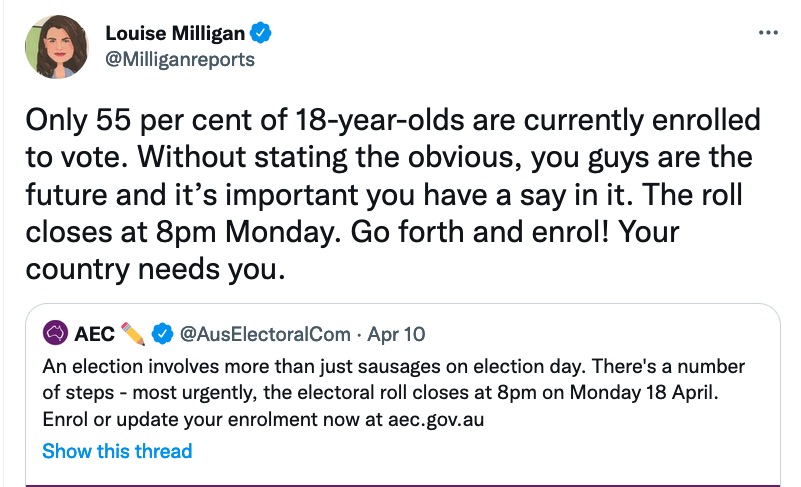 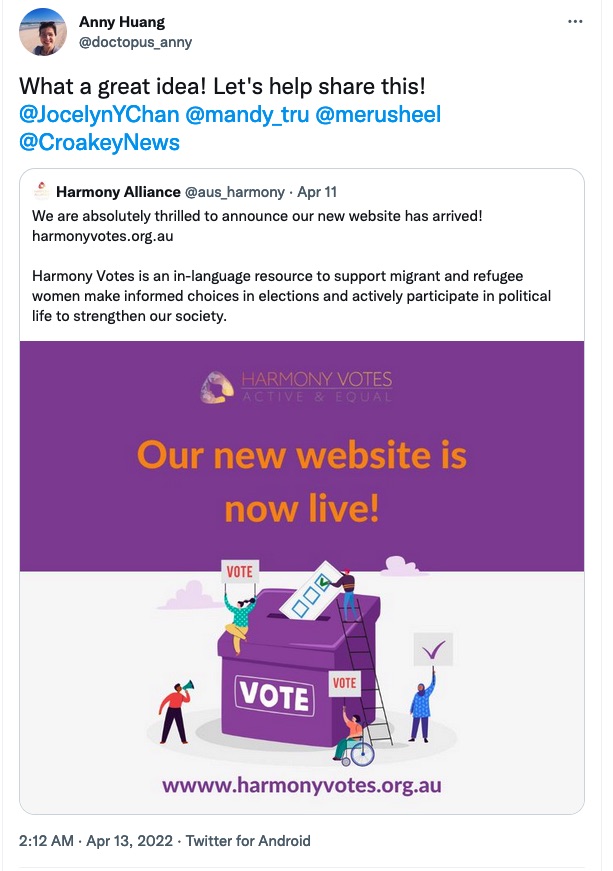 At The Conversation: One issues matters more to top economists than any other this election, climate change:

“Three quarters of the 50 top economists surveyed by The Conversation and the Economic Society of Australia have nominated ‘climate and the environment’ as the most important issue for the incoming government and the most important in the election.”

Will we see this urgency reflected in wider public and political debate?

Meanwhile, alcohol is playing a problematic role in the campaign in more ways than one. 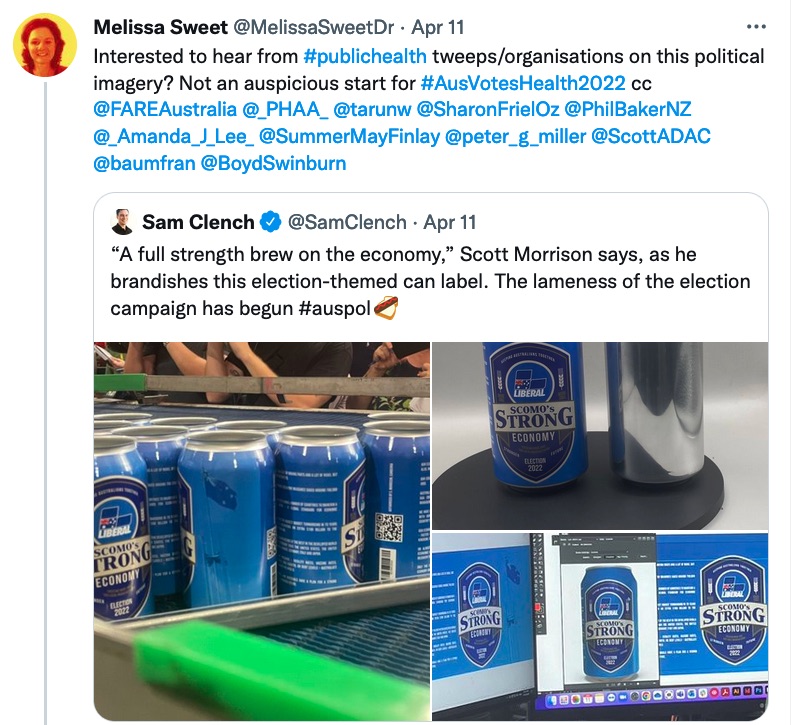 Simon Eckermann, Professor of Health Economics at the University of Wollongong, fact checked the Prime Minister’s claim that his Government had prevented 40,000 COVID deaths.

Writing at The Conversation, he concluded:

“The Federal Government’s claims of success show it did not learn the importance of the precautionary principle – a decision-making approach used in public health and environmental fields that urges caution when the science and risks are still uncertain – and wasted the luck Australia had in 2020.

To say there has been a saving of 40,000 lives relies on a comparison to the northern hemisphere at the beginning of the pandemic when Australia had a climatic cloak of protection and a safe distance from which to learn from overseas evidence.

New Zealand provides a more useful comparison if we’re to judge the success of the Morrison government’s pandemic handling. Our neighbour faced the closest set of climate and wider conditions to us and had similarly high levels of PCR testing (at least until Omicron overwhelmed testing in late 2021). On this comparison, Australia did not do well.

By September 15 2021, COVID case rates in Australia were almost four-fold that of NZ (3,038 versus 796 cases per million) with more than eight times the death rate (43 versus 5 five per million) – further puncturing the Morrison government’s 40,000 lives boast. 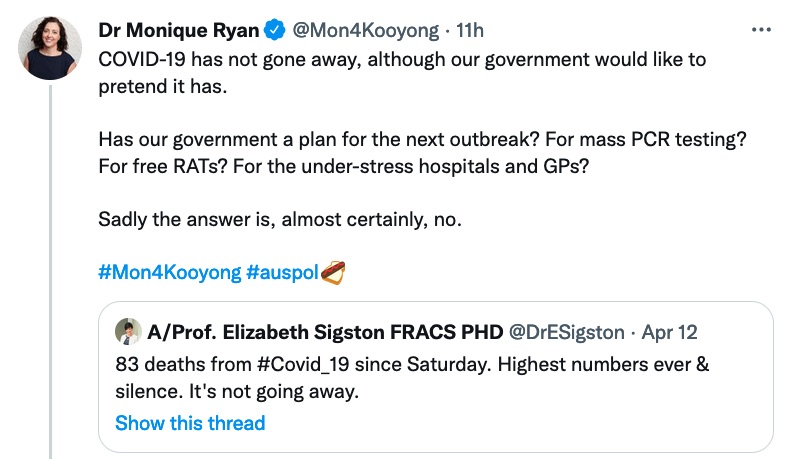 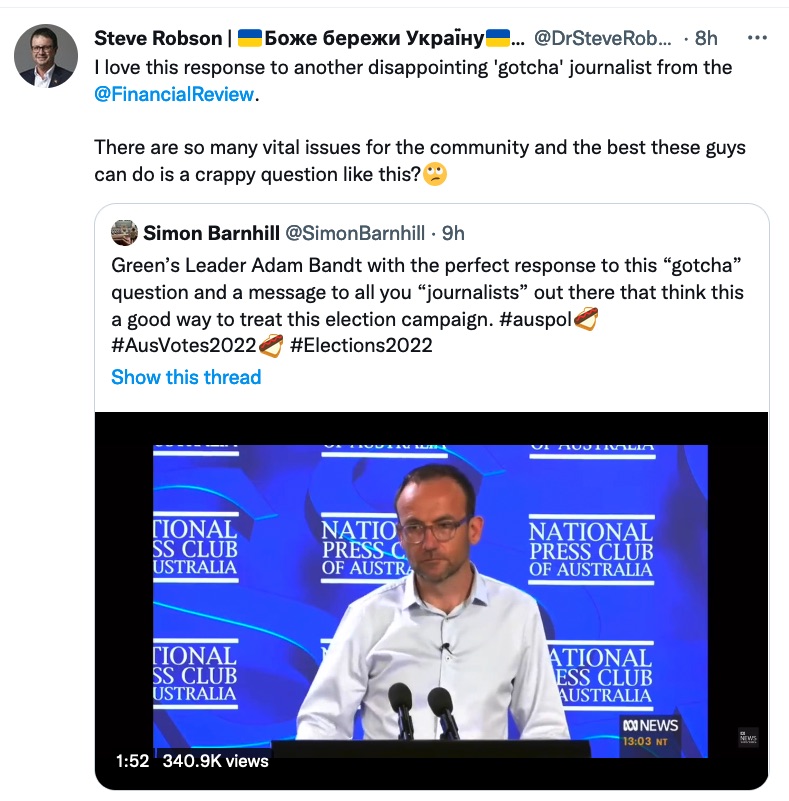 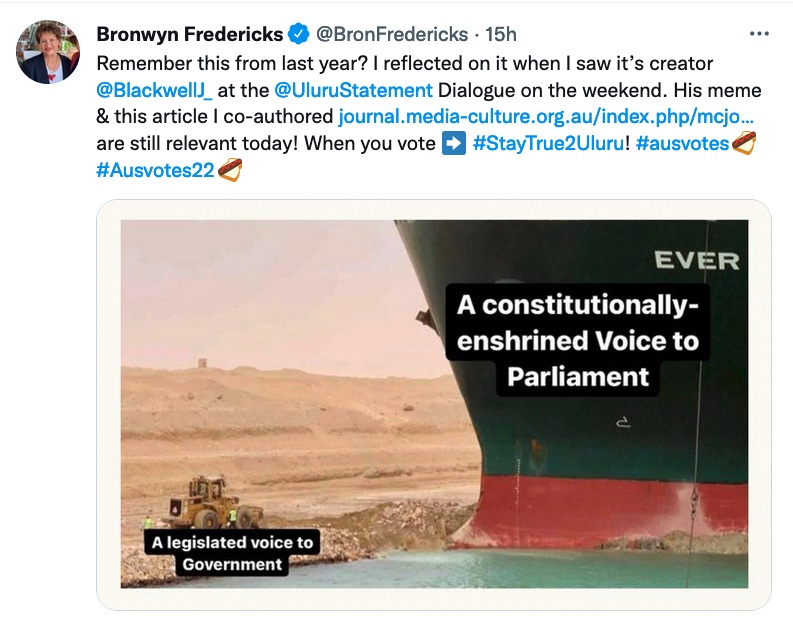 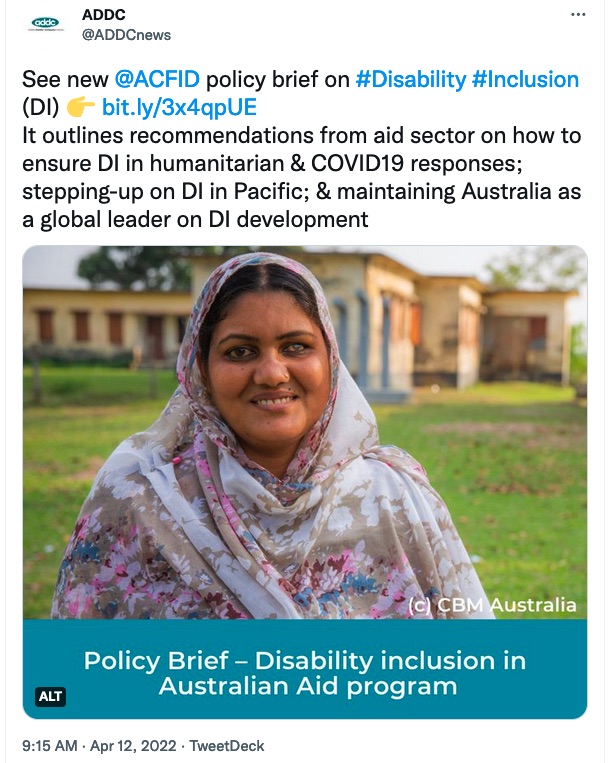 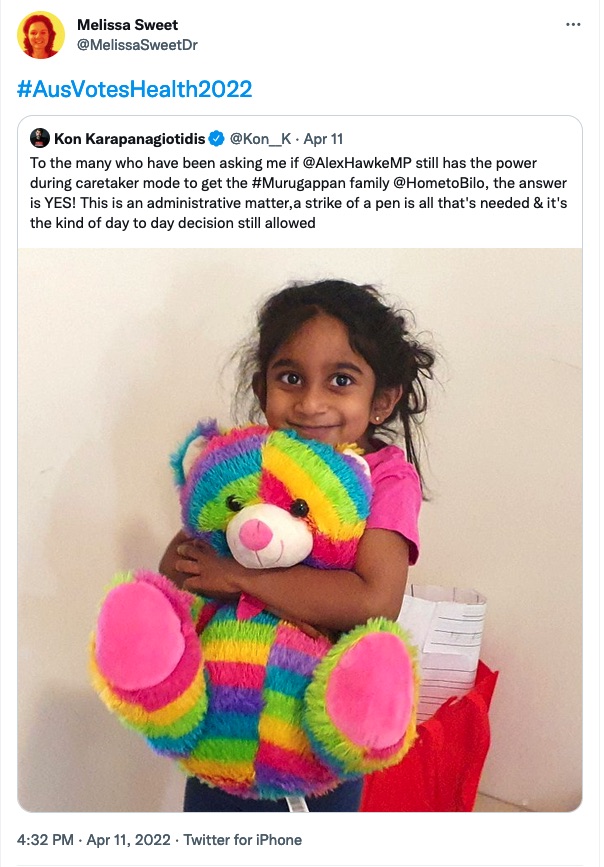 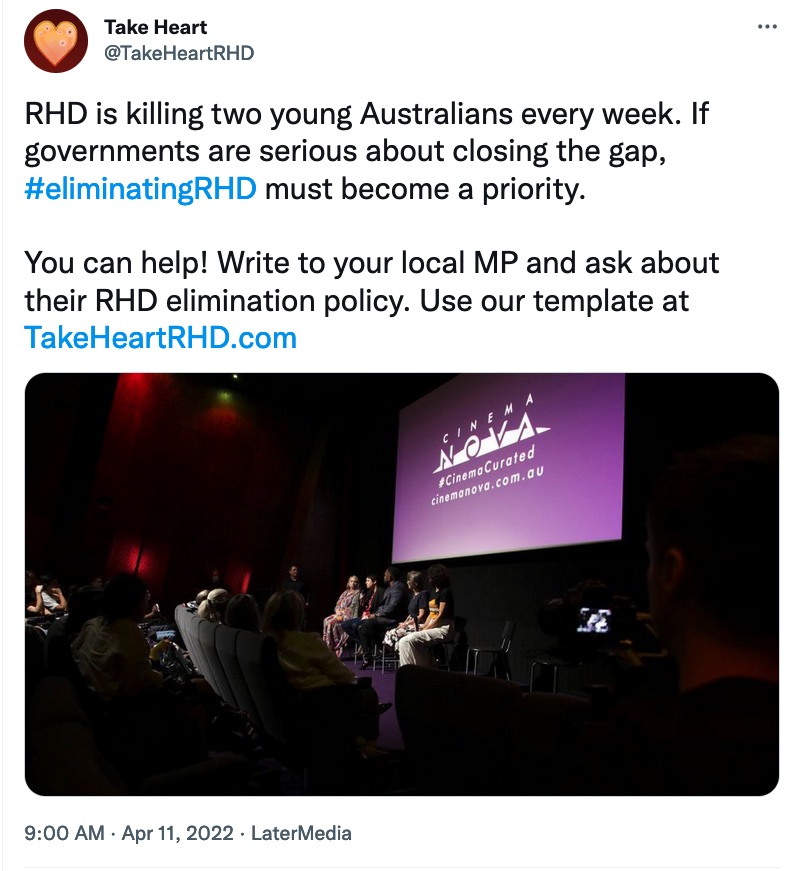 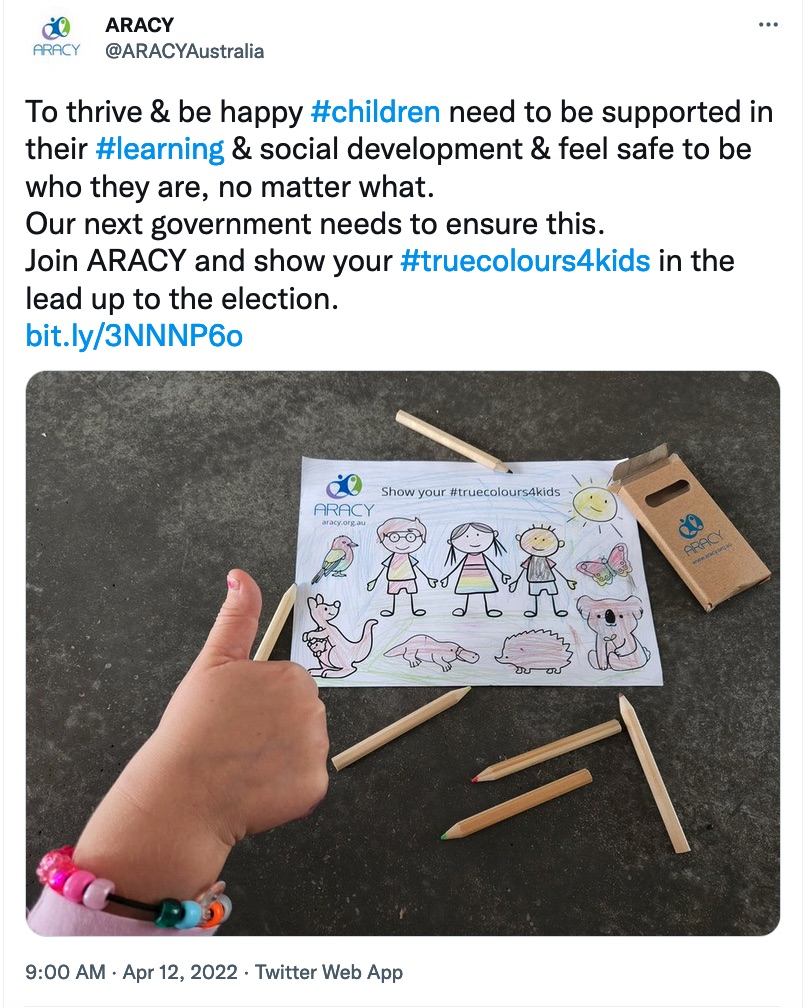 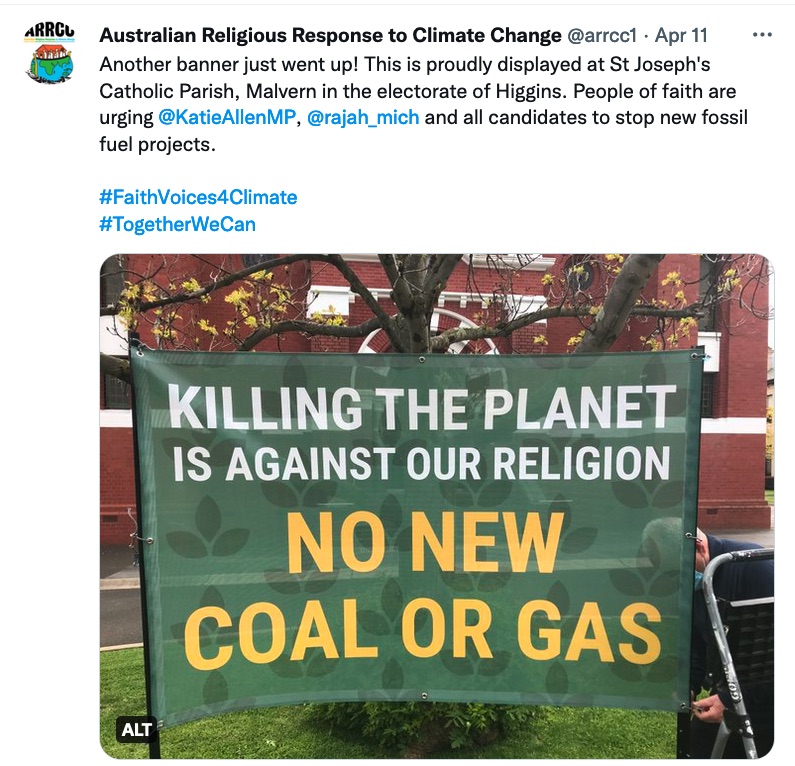 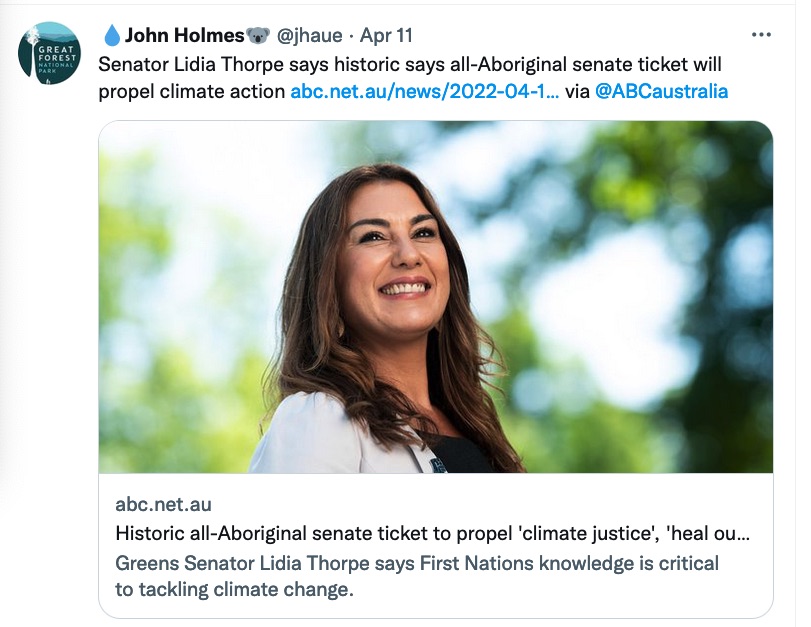 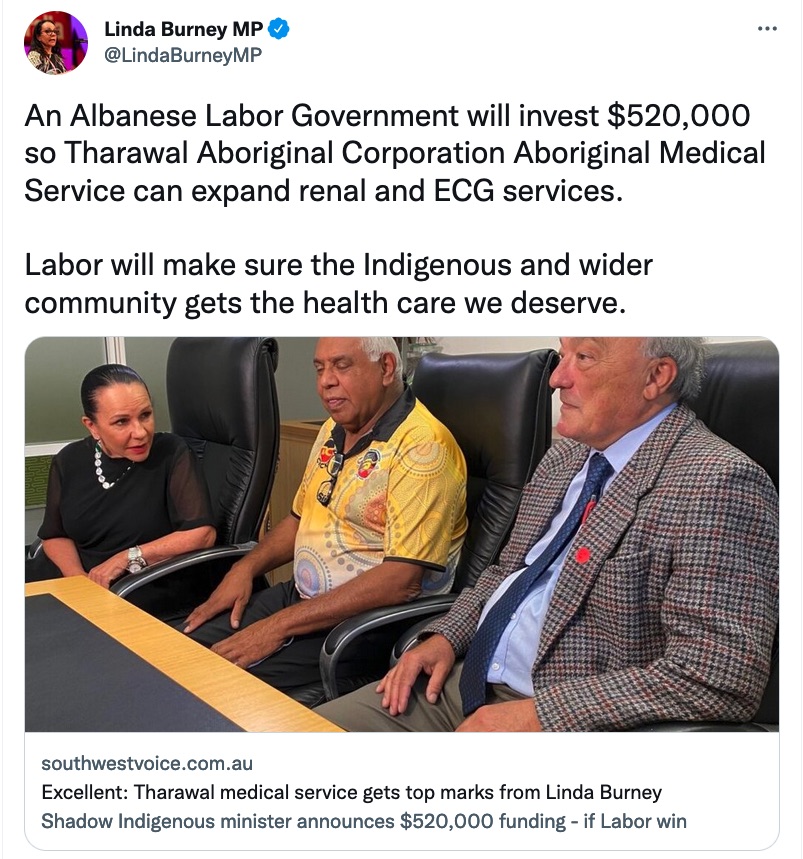 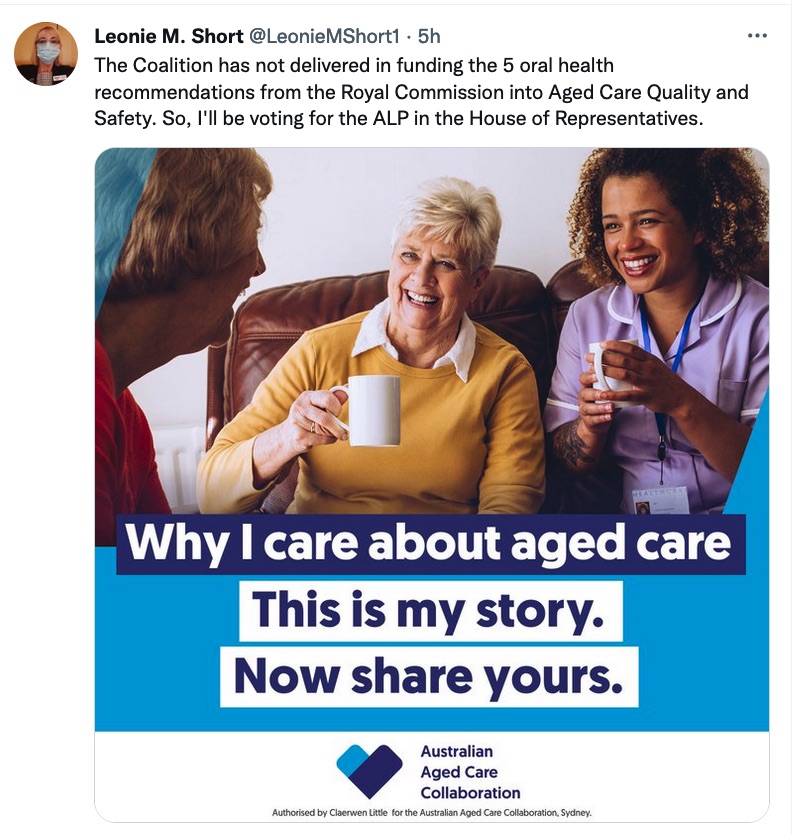 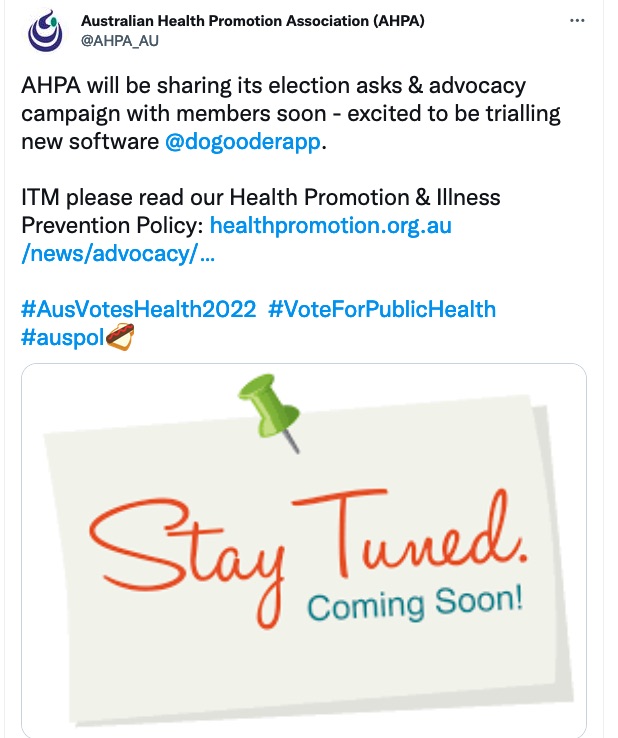 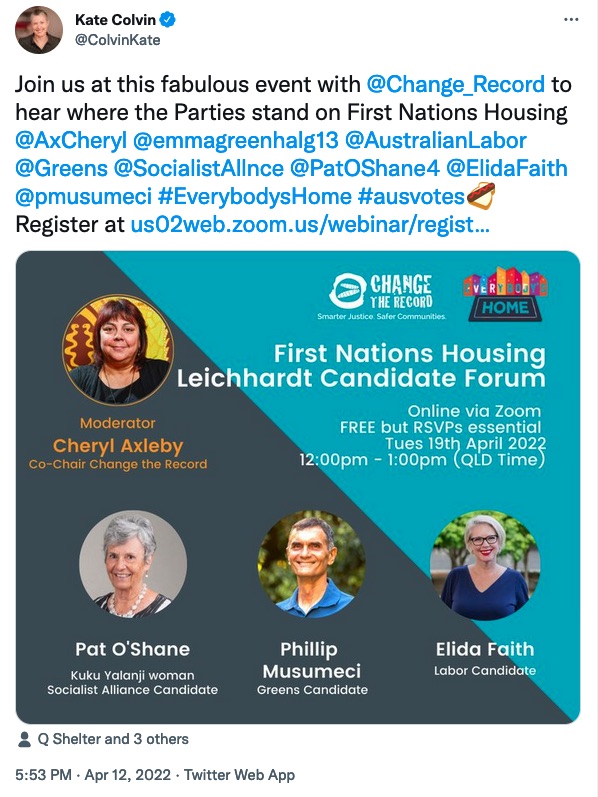 Bookmark this link to stay in touch with our election coverage.

Please use and share this hashtag – #AusVotesHealth2022 – on related content to help build a collective platform to amplify diverse voices with a focus on health equity. The Public Health Association of Australia is also encouraging use of the hashtag, #VoteForPublicHealth.

Croakey will host four Zoom events in the run-up to 21 May.

Register for each one separately: https://www.eventbrite.com.au/e/croakey-health-media-ausvoteshealth2022-registration-318361386477

We thank and acknowledge contributors to this compilation, including Associate Professor Lesley Russell, Charles Maskell-Knight and Dr Anny Huang

PrevPreviousChanging lives, saving lives and transforming care
NextWill Australia finally get a Centre for Disease Control? If so, how might it work?Next