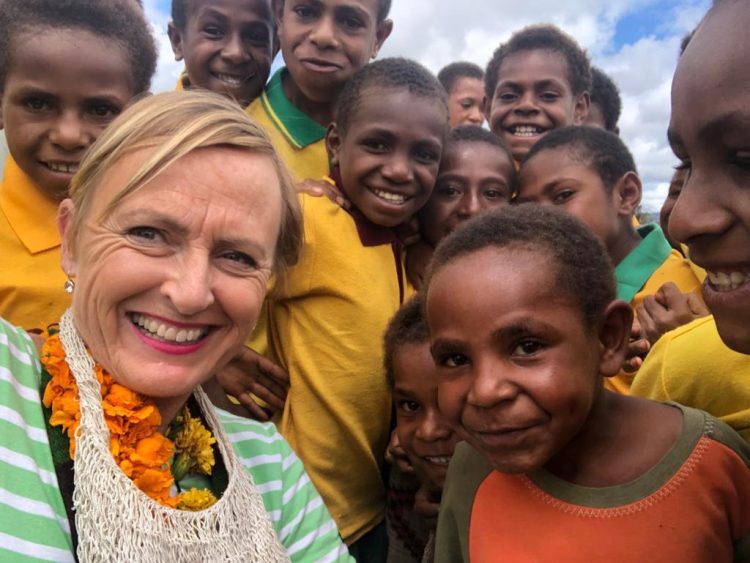 Dr Katie Allen during her visit to Papua New Guinea in 2019. Photo supplied.

As the world continues to grapple with the COVID-19 pandemic; it’s worth celebrating global success in controlling another highly infectious disease – polio.

While Australia was declared polio free in 2000, a program to eradicate the disease globally is under way, writes Federal MP and paediatrician, Dr Katie Allen.

Ending a pandemic is not an easy task. We’re learning this more every day as we continue down the road back to something we might call normal.

But this is not the first time that a co-ordinated global health effort has successfully responded to a highly infectious disease from the community. For a masterclass in disease eradication, we need only look to the story of polio.

In the early 20th century, polio cases surged in the United States leading to widespread outbreaks which quickly spread across the world. Australia was no exception; more than 1,000 people died of polio in Australia during the first half of the 1950s alone.

Australians were subjected to regular scourges of polio within their communities. It has haunted the childhood of many and left as many as 40,000 Australians with lifelong paralysis.

As polio’s spread gained momentum, the search for a vaccine intensified. As for COVID-19, it was less than a year after the initial surge in polio cases in 1952 when vaccine trials began.

Subsequent health efforts and excellent vaccine uptake did well to control the spread of polio and as time went on, developed countries were able to finally get on top of the disease.

It was a success worth celebrating. However, a much greater challenge remained. Polio had spread to no less than 125 countries, most of which could not boast the same advanced health systems as Australia or the United States.

The world’s most vulnerable people were left exposed to the ravages of polio.

A global response was needed to bring polio under control. In 1988, the World Health Organisation founded the Global Polio Eradication Initiative (GPEI). The newly founded organisation took on the ambitious aim to eradicate polio worldwide.

Australia was there from the beginning, stepping up to provide financial and technical support to the GPEI as it set out on the largest community-driven vaccination program in history.

The GPEI developed a strategy and implemented vaccination drives across the world. A broad coalition of community-members took up the task of immunising the world’s children against polio, including hundreds of thousands of Rotarians worldwide who have also contributed more than a billion dollars to the effort so far.

A seemingly impossible goal came slowly into view as the work of the GPEI continued. Some considered the challenge of polio eradication in India insurmountable. Nonetheless, vaccination drives continued, and in 1998 the GPEI had immunised more than 134 million children in India against polio in a single day.

The payoff wasn’t instant. In fact, it wasn’t until 2014 that India and the rest of South-East Asia was finally declared polio-free.

In 2019, I visited Papua New Guinea with Save the Children, as part of a parliamentary tour. Quite frankly, it was shocking to see some of the health events that are occurring in PNG – including outbreaks of polio. It demonstrated to me the power of concerted public health initiatives, and the role Australia plays in helping keep children in our region healthy and safe.

As a paediatrician and doctor, I’m passionate about promoting preventative health measures. As the co-chair of the Parliamentary Friends of UNICEF group, I’m equally passionate about being a voice for all matters affecting children.

That’s why I am an immensely proud champion of UNICEF and their work in polio eradication. UNICEF is a major partner in delivering polio vaccines across the world. Last year, their expertise alongside other organisations helped to protect children against COVID-19 while successfully keeping the spread of polio under control.

Australia has plenty to be proud of in the story of polio eradication. We’ve stood side-by-side with global health organisations to provide the support and guidance they needed to make the GPEI the great success it has been.

Come next year, the GPEI will set out the final stages of this great journey to achieve complete eradication of polio by 2026.

It means that 2022 will be a major opportunity – perhaps the last one we’ll have – for Australia to reaffirm its commitment to polio eradication by continuing its support for the GPEI.

As much of an achievement as polio eradication will be, it is also a rare chance to reaffirm the power vaccines have to change the world.

We all hope to see that happen.

Dr Katie Allen MP is the Federal Member for Higgins. She is a former paediatrician and public health professor. Katie is also co-convenor of the Parliamentary Friends of UNICEF.

PrevPreviousPushing forward with plans for a national climate and health strategy
NextDomestic violence: A surgeon’s perspectiveNext