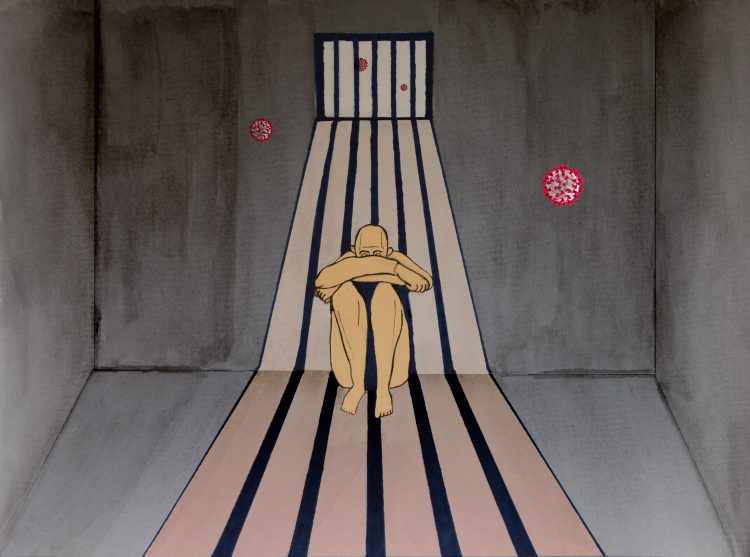 “Are we all in this together?” by Dr Tess Ryan. Ink sketch, watercolour, with graphic digital elements.

Five critical lessons from Behind Closed Walls, an investigation into prisons and COVID-19

Without transparent data and compliance to rights-based policy, people in prison are in danger of being the forgotten and discarded when it comes to COVID-19.

The article below, by Dr Tess Ryan and Andy Arch, comes as legal organisations sound the alarm over people on remand and serving custodial sentences in Queensland being held in solitary confinement and denied access to lawyers and adequate medical care.

These human rights breaches have been prompted by Queensland’s COVID-19 Declaration of Emergency, according to a statement by Caxton Legal Centre and Prisoners Legal Service.

The COVID-19 pandemic has brought many issues to light that need addressing, as seen by numerous articles critiquing the aged care sector and government management of the crisis.

The prison complex system and its duty of care to incarcerated people is another concern, and Croakey (with a grant from the Judith Neilson Institute) has been highlighting this through the #JusticeCOVID series.

Discussions about prisons open deeper concerns involving transparency in policy and action, democracy, power imbalances and how we prioritise some populations over others.

In this article, we summarise five key lessons from an in-depth investigation of prisons by Andy Arch, Behind Closed Walls.

1. The importance of open access to timely data and accountability

In 2015, the Federal Government released a Public Data Policy Statement to make data more freely available. This resulted in the creation of numerous portals containing machine-readable geocoded data, such as Australia’s data portal data.gov.au and the Department of Prime Minister and Cabinet pmc.gov.au.

Five years on, data available on prisons from government agencies is scant, dated, and incomplete. A data search on prisons shows, for example, Queensland adult prisons with geolocations, but no capacity numbers, as well as out-of-date data and a 2016 dataset of detention and correctional facilities.

This lack of detail and coherence in data is concerning. Data must be provided clearly, and made accessible to citizens to allow for a more accountable government and the opportunity for constituents concerned about prison-related matters to judge a government’s appropriateness to govern.

2. Lack of transparency and compliance

The lack of transparency makes the understanding of issues related to COVID-19 more difficult and leads to misinformation. Also, of major concern is a lack of compliance with legislation, conventions and agreements made by governments to protect prisoners.

The United Nations Optional Protocol to the Convention against Torture and Other Cruel, Inhuman or Degrading Treatment or Punishment (OPCAT) aims to prevent abuse of people in detention where people are deprived of liberty, such as prisons, through opening these places up to regular independent inspections.

According to the OPCAT Readiness Report from September 2019, only three states and one territory were currently in a position to implement an NPM.

Reviews conducted across the states and territories show consistent themes arising throughout prisons – overcrowding, facilities poorly maintained, punitive measures such as strip searches and solitary confinement and staff shortages. Other issues of concern include limited staff training, higher rates of physical and mental health issues in prisoners and a patchwork of departments and processes for complaints.

In a time of COVID-19, a lack of compliance with these important aspects of governance can be disastrous.

Privately operated prisons are under pressure to show how they are managing the care of their prisoners. An audit from the Victorian Auditor General discovered two out of three private prisons delivered cost savings of up to 20 percent, yet did not evaluate the effectiveness of their safety measures, failed to investigate the causes of incidents and had incident rates higher than the average of other Victorian prisons.

These facilities have a duty of care to protect prisoners against risks that are reasonably foreseeable and a standard of care that would be regarded as reasonable, as laid down in the National Report to the Royal Commission into Aboriginal Deaths in Custody, 1991.

Despite this, state legislatures such as NSW attempt to legislate this duty of care away by placing the responsibility solely on private operators. Governments have been actively choosing to insulate themselves from being held accountable, making recourse of prisoners or their families all but impossible.

The convergence of events in 2020 has done much to demonstrate who we are and who we want to be as a society. From George Floyd’s death captured on phone cameras and reported globally, highlighting racism within institutional domains, to commentary suggesting that elderly and unwell people should be sacrificed to keep economic stability, we have seen an individualism in rhetoric, juxtaposed with throw-away statements of ‘all being in this together’.

Yet we have also heard great advocacy across numerous areas. George Floyd’s death reiterated (almost verbatim) concerns raised by the death of David Dungay Jnr, and reminded us that Aboriginal and Torres Strait Islander people have long been campaigning against brutality from the justice system.

COVID-19 has almost seemed like a dam buster – leading to wider discourse on how we treat our aged and most vulnerable, our Black and Brown citizens, and those within the carceral system.

The failure of governments to properly address COVID-19 and the prison system has far reaching implications for the greater society. Much has been said elsewhere about the need for better preparation to address the COVID-19 threat for people confined in prison and other places of detention.

While state and federal authorities attempt to assure the public that they are doing the right thing by the prisoner population, anecdotal evidence from prisoners and review findings from a Supreme Court shows that no real preparation has occurred.

If a prison does become the epicentre of a COVID-19 outbreak, it runs the risk of affecting all of us, as that outbreak seeds the rest of the population. We only need to cast our eyes overseas to see how devastating an infection in a place of detention can be.

It is imperative that we lift the veil of secrecy over places of detention. While respecting a person’s right to privacy, we need to make available in the public domain as much information as possible, holding places of detention, staff, and operators accountable for their actions.

Healthy democracies are built on transparency and accountability. Governments should be providing access to their data in a timely manner to facilitate data democratisation as this makes institutions accountable.

Until we achieve this, we all become unwitting accomplices in the ongoing transgressions visited on the most vulnerable in our society, making a mockery of the view that Australia is the land of the ‘fair go’.

Andy Arch is a Melbourne based Solutions Architect with a previous history working in clinical environments within the health sector. Andy is passionate about understanding data and has a strong interest in equity and social justice issues.