Where is the focus on healthy environments for children at the SA election? Photo by Alison Barrett

In this South Australian election scorecard, which parties score best for public health?

Introduction by Croakey: In the lead-up to the South Australian election on 19 March, SA-Best and The Greens have committed to supporting public and preventative health measures if elected into parliament.

The Labor and Liberal Parties stated they would monitor health inequities through Labor’s commitment to establishing an independent preventative health agency and Liberal’s focus on health prevention through the already-established Wellbeing SA.

The SA Public Health Consortium have been actively promoting their election platform over the past month, which includes calls for action on creating healthier environments for children, introducing a floor price on cheap alcohol and strong investment in public health and monitoring of health inequities.

Members of the Consortium write more below about their election platform and how SA’s main political parties score on public health.

South Australians are heading to the polls for the state election this Saturday, 19 March.

The election platform was distributed to the four political parties and based on responses to each of the five priorities during the forum as well as written responses from the parties, the Consortium partners developed an election scorecard.

The Consortium rated each party’s response and commitment to the prioritised public health issues, indicating either ‘Commitment’, ‘No commitment, but some related policies/strategies’ or ‘Positions/Strategies/Policy Unknown’.

The Consortium launched its election scorecard today, indicating ratings for each party’s level of commitment to the listed priorities.

Note, information in the scorecard is based on written responses provided directly to the Consortium by Monday 28 February or discussed at the Consortium’s virtual state election forum on 23 February 2022. 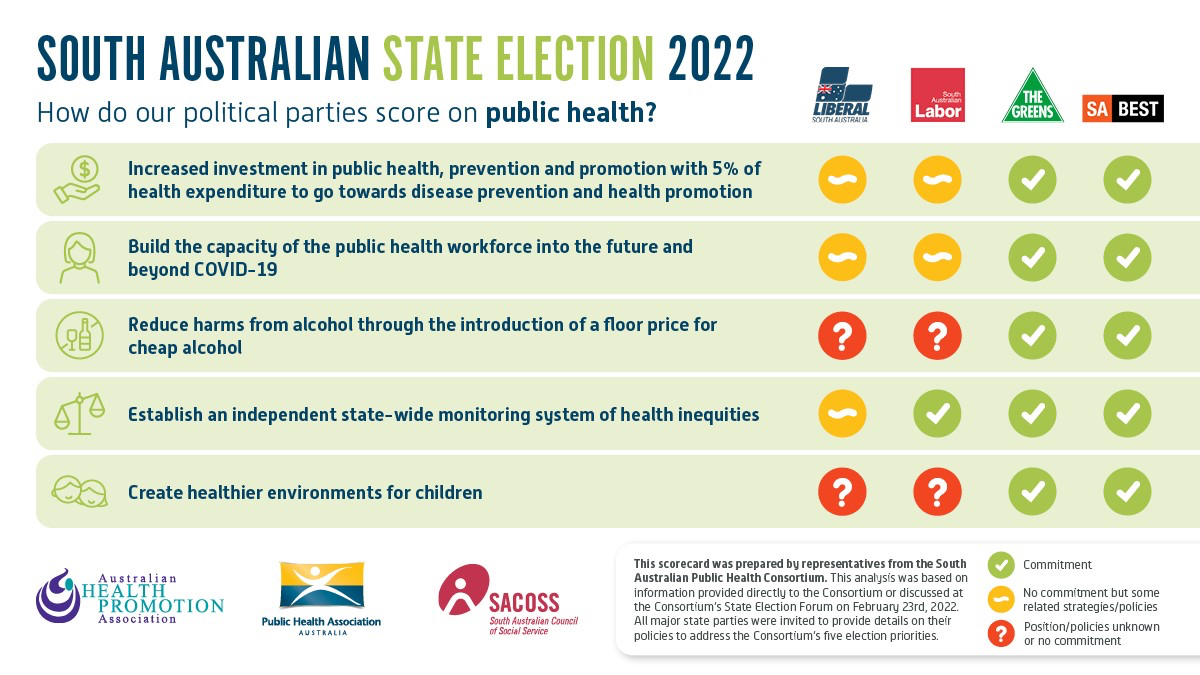 The ratings for The Greens SA and SA-Best reflect their support for all of the Consortium’s priorities and their stated commitments to improving public health and health promotion.

The Greens highlighted the importance of recognising and addressing the social determinants of health and the ways in which factors such as poverty and poor housing impact on people’s health and wellbeing.

The Greens want to refocus SA’s health system on primary healthcare services and preventative health. They support an increased investment in public health, prevention and promotion with at least five percent of health expenditure going towards disease prevention and health promotion.

“The Greens would rather build a fence at the top of the cliff than have an ambulance waiting at the bottom. That’s why we want to refocus our health system on primary health care services and preventative health,” The Greens told the Consortium.

SA-Best similarly emphasised that disease prevention and health promotion is a proven strategy and should be the foundation upon which our health care system is built. As outlined in the National Preventative Health Strategy 2021-2030, a target of five percent of total health expenditure will achieve this.

“Disease prevention and health promotion is a proven strategy and should be the foundation upon which our health care system is built,” SA-Best told the Consortium.

SA Labor’s Shadow Minister for Health Chris Picton stated their commitment to the Health Performance Council as a crucial independent body for monitoring and reporting on health inequities.

While the Labor Party did not provide a specific commitment of five percent of health expenditure going towards public health, they announced they would create an independent preventative health agency. The focus of the independent agency would be on disease prevention and health promotion as well as the creation of jobs within the public health workforce.

The Liberal Government’s Minister for Health, Stephen Wade, highlighted their commitment to prevention through the current Wellbeing SA strategic plan.

Minister Wade discussed the potential for adapting the Western Australian AHPA training program to support the public health workforce in SA and also encouraged the Consortium to work with Wellbeing SA to identify any new indicators for health inequities that could be included in current data collections.

Neither the Liberal or Labor Party provided a commitment to an introduction of a floor price for cheap alcohol.

They also did not commit to the Consortium’s election priority focused on creating healthier environments for children through phasing out unhealthy advertising on government property and revising the Right Bite strategy for school canteen menus.

More detailed responses from the political parties are available on the Public Health Association of Australia’s website.

What’s on the health agenda for the South Australian election?

See Croakey’s archive of stories on health in all policies.

PrevPreviousWhat a legacy: floods, disaster management failures, and no duty of care for children’s futures
NextFor hearing equality: what helps?Next