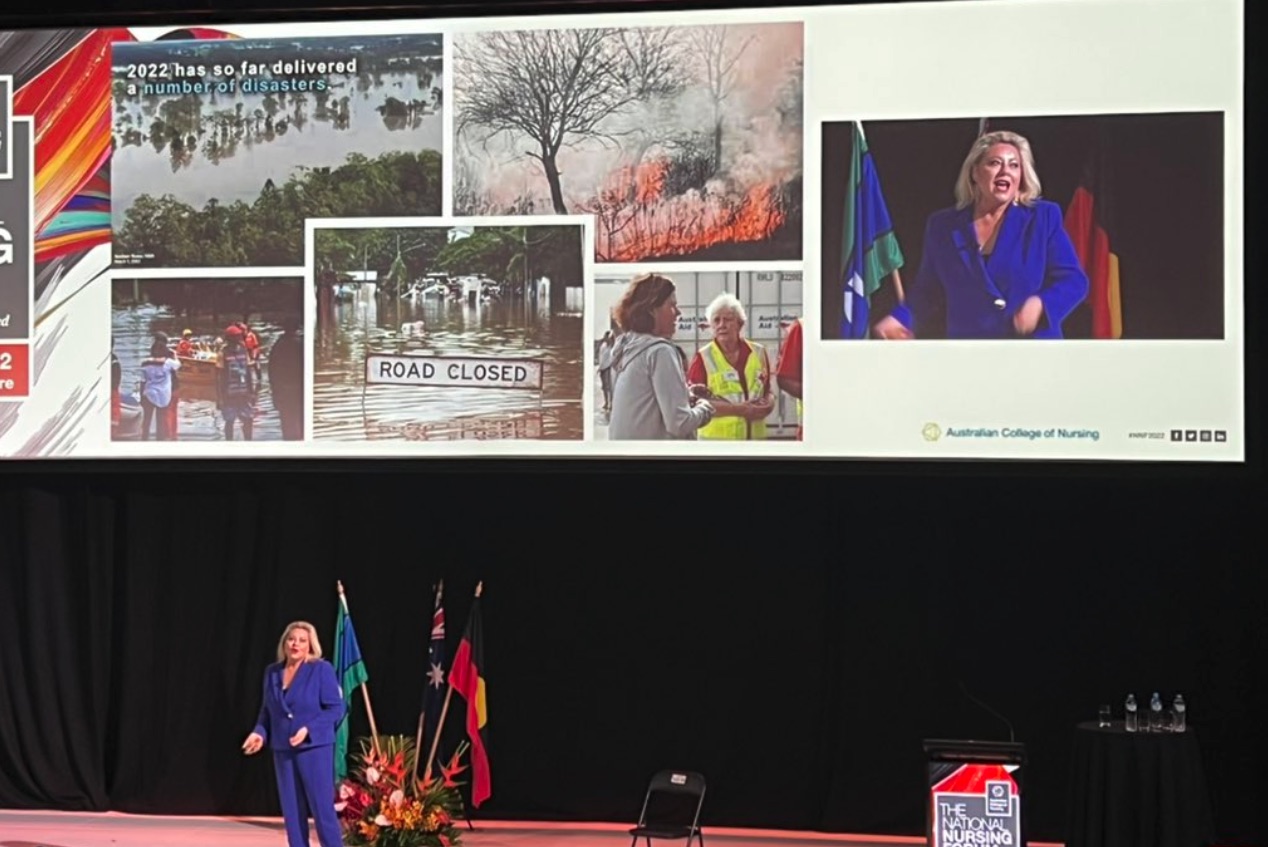 Nurses must ensure the traumas experienced in aged care during the pandemic are never allowed to happen again, delegates at the National Nursing Forum were told today amid concerns about the immense pressures upon nurses. Dr Amy Coopes reports below for the Croakey Conference News Service.

The unchecked transmission of SARS-CoV-2 through residential aged care facilities in Australia and overseas would be seen as a “blight on our generation”, Australia’s peak nursing conference heard this week.

Presenters and participants at the National Nursing Forum gathered to share experiences of burnout, moral injury and trauma amid the ongoing COVID-19 pandemic, and delegates were urged to guard against people in aged care ever again experiencing such devastation.

More than 600 nurses converged on Larrakia Country in Darwin for the Australian College of Nursing’s event, where workforce issues dominated discussions on the event’s opening day.

ACN chief Adjunct Professor Kylie Ward told delegates she had received hundreds of calls from nurses pushed to their limit by the demands of COVID-19 and a string of climate change-fuelled fire and flooding disasters.

“We, in every jurisdiction, have been carrying our communities and our colleagues,” Ward said in her opening address, describing the emotional trauma, moral injury and isolation many nurses experienced on the frontlines of the pandemic.

“The elastic has been stretched and stretched. At what point will we break?”

Proceedings got underway with a powerful and acclaimed Welcome to Country from Larrakia musician Edwin Fejo of The Youth Mill, who performed a series of original compositions accompanied by yidaki and a string duo. One, titled ‘Together’, was performed against the backdrop of the text of the Uluru Statement from the Heart.

Aboriginal and Torres Strait Islander nursing and midwifery will mark a major milestone this week with a formal apology from deans of midwifery and nursing about the profession’s historic and ongoing role in causing harm to First Nations people.

Professor Patricia Davidson, Vice-Chancellor at the University of Wollongong and – at the outset of the COVID-19 crisis, Dean of the Johns Hopkins School of Nursing – described the “unbelievable” conditions confronting healthcare workers in the United States in those early days.

Davidson recalled being handed a brown paper bag with hand sanitiser and a mask which, due to equipment constraints, had to be worn until it disintegrated, a sobering indictment on the state of healthcare in the wealthiest country in the world.

Far from setting trends, she said the pandemic had merely acted to amplify challenges that already existed in the healthcare system, including the ageing population, burden of chronic disease, and – “most importantly” – growing disparities in access and outcomes.

“Across society we have seen a widening of gaps,” she said, describing a widening of gender disparities and a “heartbreaking” over-representation of migrant nurses among the healthcare worker death toll.

The social determinants of health had been highlighted like never before, and Davidson said nurses needed to bring these “back into our wheelhouse” as pivotal advocates for whole-of-patient care. As the world’s most trusted profession, she said nurses were also uniquely placed to tackle the kinds of misinformation and disinformation that had run so rampant during COVID-19.

While the pandemic had seen unprecedented disruption across the world’s health services, Davidson said its nadir had been in residential aged care facilities and nursing homes. She said the latter was a woeful misnomer because, despite the name, “we all know no nursing goes on”.

Davidson asked delegates to reflect on how, collectively and as individuals, the nursing profession had allowed this to happen, and said they had a duty “as leaders and global citizens” to guard against it ever happening again.

Condemning the COVID toll on aged care as the logical outcome of privatising something that should be a public good, and the product of power imbalances in healthcare, Davidson said the devastation wrought by COVID among aged care institutions would be seen as a “blight on our generation”.

“We as a profession have a duty to seize this moment,” she said, urging colleagues to take ownership of their responsibility and privilege, and to “reimagine our world anew”, warning that “if we don’t act others will act for us”.

With one in three children born in Australia today expected to live to 100, Davidson said addressing the problems in aged care was a critical imperative for us all.

At a national level, Davidson said the pandemic had demonstrated the value of leadership and highlighted the importance of health workforce planning, something she said governments had to improve on.

It had also illustrated the life-saving role that nurses played, she added, noting that close monitoring, positioning and supportive care were what made the difference early in the pandemic, with quality of nursing care directly linked to patient outcomes.

She quoted MSF nurse Nadia Andrade, who described working in a New York City tent hospital erected for COVID-19 as worse than many of her experiences in conflict zones and said “an intensive care bed without a nurse is just another place of suffering”.

Nurses were the ones who held COVID patients’ hands in their final moments, and Davidson said they had borne witness to enormous death and suffering over the past few years.

If she had to capture nursing experience of the pandemic in a single image, Davidson said it would be the sight of a supply room once filled with infusion pumps and other equipment jam-packed with iPads on tripods, used to dial in families of the dying by intensive care staff. 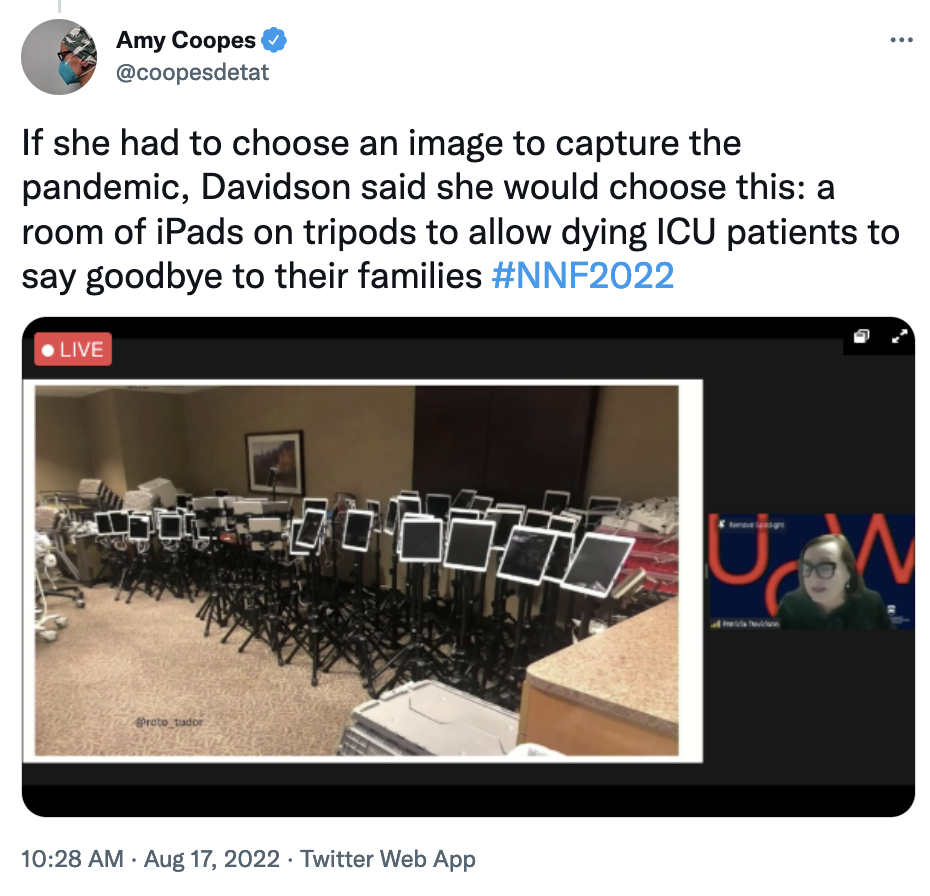 Though they were, as a profession, exhausted, Davidson exhorted her colleagues to pick themselves up and pivot to the next phase of challenges, which included a surge of deferred and delayed care due to COVID’s monopoly on resources.

ACN’s Ward said there would be no reprieve for nursing, with escalating cost of living pressures and a recession looming.

“What does it mean for us and the people we care for when we talk about health equity and the social determinants of health?” she said.

Ward called for the so-called “war chest” of funding marshalled for COVID-19 efforts to be allocated to protecting the “fundamental human rights” of a nursing workforce under siege from verbal and physical abuse and occupational violence, which she described as a reflection of prevailing misogynist attitudes in Australia.

Nurses should be able to show up to work, use public transport and walk to their cars without fear of being attacked, Ward said. 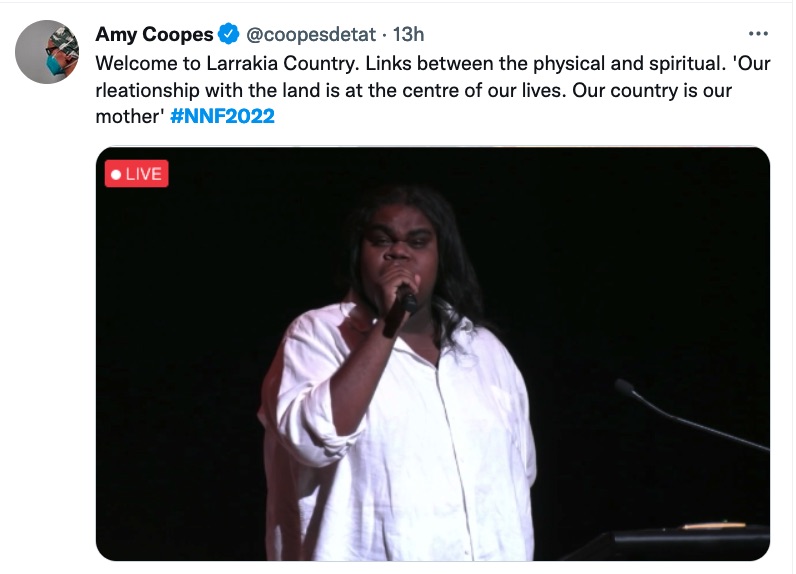 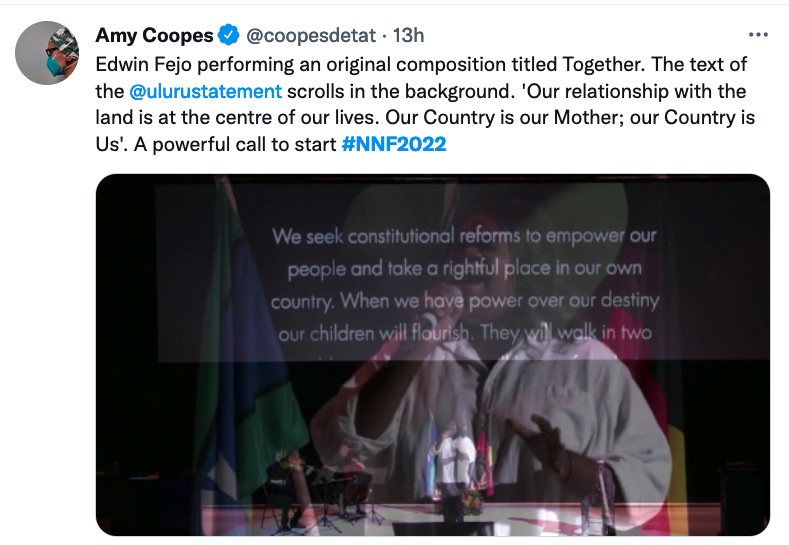 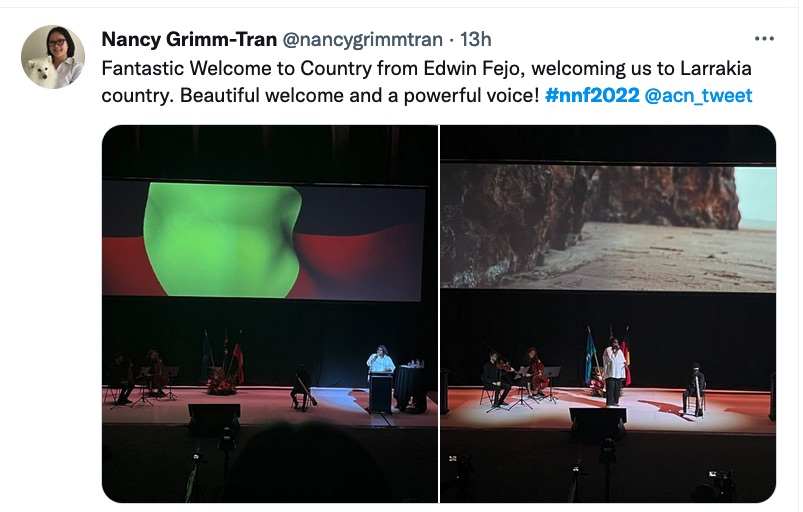 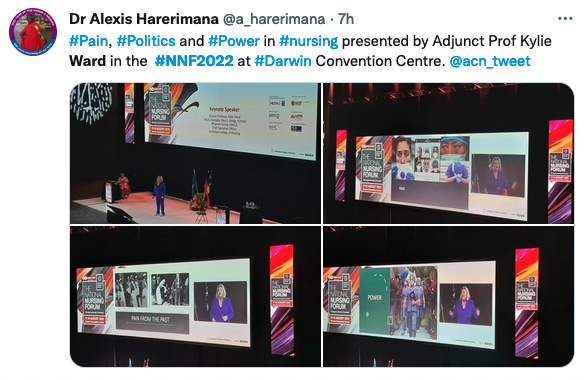 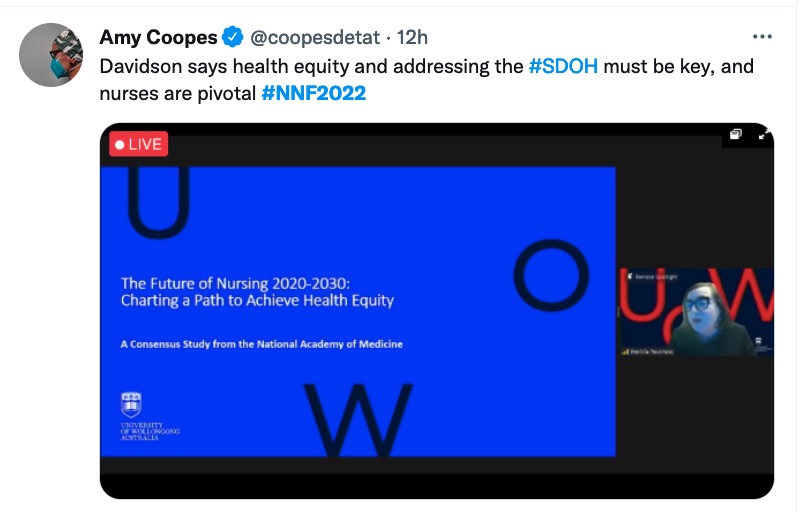 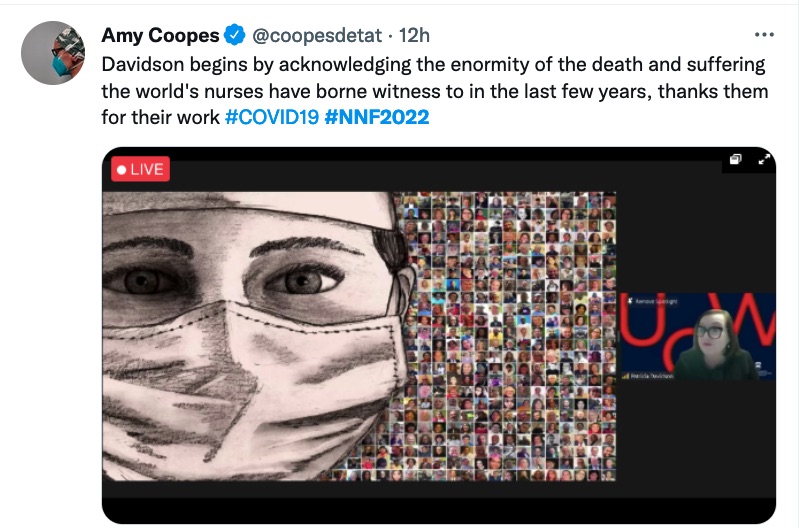 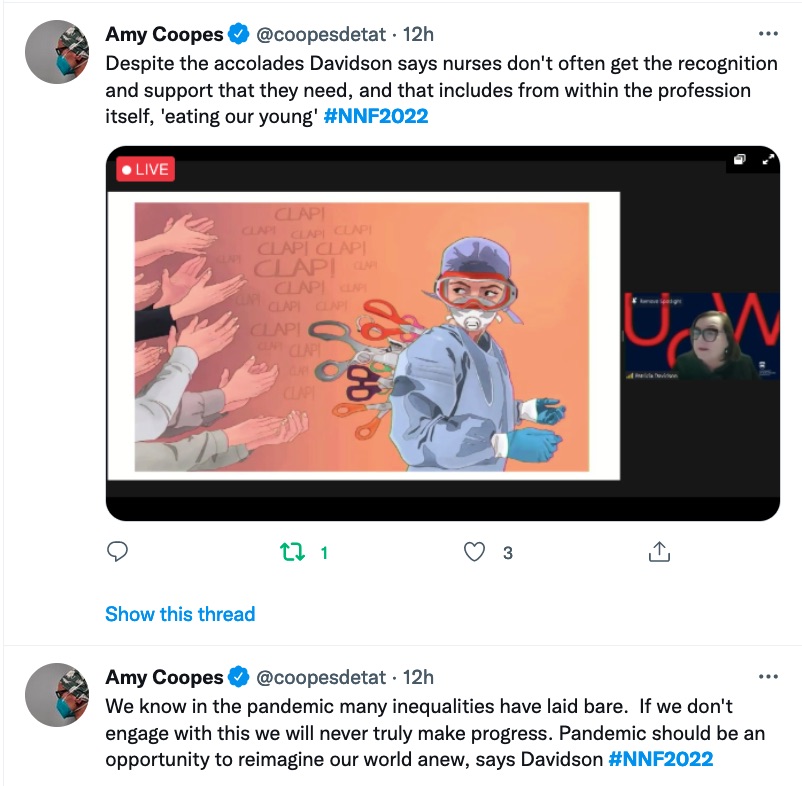 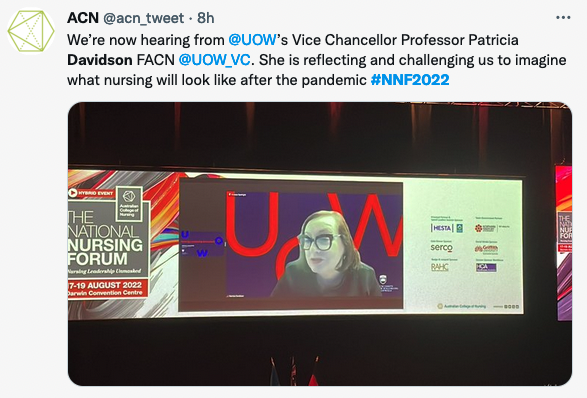 PrevPreviousAmid the shock, horror and confusion, not everyone is alarmed about Morrison’s many ministries
NextGlobal health leaders warn the Australian Government against allowing any new coal or gas projectsNext