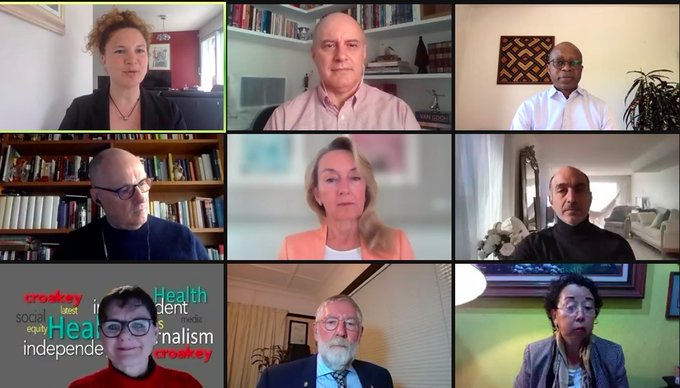 Launch of the Public Health Leadership Coalition, on 12 May

International health and human rights leaders are warning that a “timid” Rome Declaration from this week’s G-20’s Global Health Summit would be a major setback to global efforts to put an end to the COVID-19 pandemic.

The Summit’s critical deliberations come as the World Federation of Public Health Associations (WFPHA) launches a new Public Health Leadership Coalition, aiming to lead better responses to the pandemic and other existential threats and to hold authorities — governments and organisations — accountable.

Marie McInerney reports on the launch below, and via this Twitter thread.

Our post also features a Q&A led by Croakey’s Editor-in-Chief Dr Melissa Sweet with Professor Luis Eugenio de Souza, WFPHA Vice-President and a public health leader from Brazil, who said there is a critical need for a “technically competent, ethically responsible and socially committed” coalition to do common good work together.

Brazil’s response has been one of the “catastrophes” of the pandemic; as Scientific American reported this month, “a steady tsunami of severely sick patients has led to an unprecedented collapse of the entire country’s health system” and set records in death and infection rates.

“COVID-19 should be the last pandemic” was the unequivocal declaration from the Independent Panel for Pandemic Preparedness and Response, which last week delivered a scathing assessment of many of the failed national and international responses to COVID-19.

But there are concerns the Rome Declaration from the G-20’s Global Health Summit, to be hosted on Friday by Italy and the European Commission, will pull its punches and fail to meet the challenge still facing the globe.

But it said the draft manifesto, framed as a “statement of principles,” lacked concrete targets for COVID vaccine dose-sharing, or medicines and vaccines finance, amid other reports that it may buckle on the proposal for a waiver on patent rights on COVID-19 vaccines at the World Trade Organization.

There’s concern also that proposals for a Pandemic Treaty will stumble in Rome, as the world — according to World Health Organization Director-General Tedros Adhanom Ghebreyesus — has gone beyond vaccine nationalism to “vaccine apartheid”.

The lack of leadership, or the cost of terrible leadership has been blamed for so much of the catastrophe still unfolding with COVID-19.

Some, like Brazilian president Jair Bolsonaro did not just fail to respond, he actively worsened the crisis in Brazil, using his constitutional powers to interfere in Health Ministry matters, according to a rating of the “world’s worst pandemic leaders”, published in the United States edition of The Conversation.

Seeing too many leaders driven by populism, science denial and “wishful thinking” has led the World Federation of Public Health Associations (WFPHA) to this month launch a global Public Health Leadership Coalition.

In a statement, the Coalition said it aims to form a united front, to be a “strong, independent and accountable voice” of public health, communities, civil societies, and scientific experts, and to make governments and organisations “accountable for their choices.“

Through a “protection, prevention, and health promotion” approach, it will act to ensure global responses to the COVID pandemic and other planetary health concerns — like climate change and what’s known as the ‘echo pandemic’ of suicide and mental illness — are “evidence-informed, equitable and effective”.

WFPHA President and Coalition chair Professor Walter Ricciardi, a COVID-19 advisor to the Italian Government, said the Coalition wants to take advantage of the growing visibility of science and scientists through the pandemic.

“Most of us were not used to being on prime time media,” he acknowledged at the Coalition’s online launch, chaired by Croakey’s Editor-in-Chief Dr Melissa Sweet, who observed that the group was “framing leadership as a life-saving intervention”.

Having gained that profile and influence, Ricciardi said public health experts now need to use it to “propose and sustain decisions and politics that improve the determinants of health and advance the cause of economic, social and racial justice”.

Bettina Borisch, Professor at the Institute for Global Health of the University of Geneva, echoed the findings of the Independent Panel’s report and others in observing that many high income nations have performed poorly in the pandemic while many poorer nations have done well or better.

“We see that what counts more than the money you put into the health system is trust of communities and leadership,” she told the webinar.

Some had strong clinical health systems but failed because their public health systems were “more or less weak”, a critical gap that was almost impossible to strengthen in the midst of the pandemic, she said.

Borisch hoped the Coalition would lead the worlds of science and politics to develop “a common language” to come to an evidence-informed political position, saying public health uniquely straddles both worlds.

However, she warned that the fate of whole nations and the globe could not be “at the mercy” of governments like Brazil’s that denied COVID-science, saying the Coalition needs to ensure that some principles of public health are embedded “constitutionally”.

Coalition members from Australia, Africa, Europe, and South and North America also highlighted the importance of universal health access, of addressing inequality within and between countries, and the power of community and working collaboratively in the pandemic.

The scale of the task ahead for global health is huge, according to UK academic Colin McInnes, Pro Vice-Chancellor at Aberystwyth University.

Writing in the UK edition of The Conversation, he said that the “liberal vision of global health – one which held that the rich had responsibilities to the rest of the world, and progress was possible through cooperation – was already in trouble prior to COVID”.

COVID-19 has demonstrated, he said, that in a time of crisis, the rich and powerful fall back to national approaches “with only secondary concerns for the global health good”.

Q: Given we already have so many health organisations, at local, regional and global levels – why do we need this coalition? What will it bring that we don’t already have?

de Souza: We need a very special type of coalition: a leadership coalition, that is, a dynamic and collective process in which a team of technically competent people, ethically responsible and socially committed to the common good work together to promote a democratic and evidence-informed policy-making process that can lead to the implementation of effective public health interventions to tackle the covid-19 pandemic.

Q: What do we mean by leadership, what does this encompass? Are there specific qualities of leadership that are more important during a pandemic?

de Souza: “Leadership” can be defined as the collection of competences – knowledge, skills and aptitudes – through which a group, sharing core beliefs, creates or adapts a vision to a specific context and enable — directly or indirectly — its implementation.

During a pandemic or, more precisely, a syndemic, the most essential work of a leader is to empower citizens and communities, creating more leaders as Mary Parker Follet would say.

de Souza: Leadership is all the more important as far-reaching changes are needed. As it becomes clear that humanity will not overcome the current multiple crisis — health, social, economic — without changing the unsustainable, predatory and unfair ways in which it deals with nature and with all social groups, the relevance and urgency of a shared and distributed leadership are evident.

Q:  Taking a strengths-based approach, what have been some of the examples of outstanding leadership during the pandemic, and what can be learnt from these examples?

de Souza: During this pandemic, I have seen very inspiring examples of outstanding leadership among the South-American Indigenous people. Indeed, in addition to the coronavirus, loggers, mining companies, hotel chains and land grabbers threaten the Indigenous people, but they resist. Mobilising his people, Chief Babau said: “We have never had peace in this country. […] We are already used to the war and we will continue there”.

Q: When we talk about leadership, we often are referring to hierarchies and people or institutions with power. What about leadership from communities during a pandemic; what does this look like and why does it matter?

de Souza: In a context of negative political leadership, as it is the case in Brazil, where the highest public authorities deny the severity of the pandemic, promote unsafe and ineffective treatments and neglect vaccine production and procurement, leadership from communities are essential.

There are many examples of community leadership in the slums of the Latin-America’s big cities. At the same time that they demand an effective action from the State, denouncing its necropolitical actions.

The community organisations offer solutions to their territories, disseminating information on how to reduce the transmission of the virus or how to produce and use face masks, collecting donations of food and essential products, finding ways to ensure access to drinking water and organising support services for patients, among other actions.

Their actions matter a lot, because they care for the most vulnerable, they provide food, medicines, they give hope and strength to continue, ultimately, they save lives.

Q: And what about pandemic leadership outside of the health sector?  Why does this matter, and what are some examples of where this is working well – or not?

de Souza: In fact, we live not a pandemic, but a syndemic, that is, a complex phenomenon that involves adverse and synergistic interactions between different diseases and precarious social conditions.

In this context, leadership outside the health sector is crucial. To overcome this critical situation, the world needs shared and distributed leadership, involving people and teams from the most diverse sectors such as health and social assistance, the environment, the economy, etc.

The Biden Administration, in the USA, is setting a good example, articulating health actions, such as vaccination and patent suspension of covid-19 vaccines, with strong investment to face the recession, unemployment and other types of social adversity.

Q: How will we know if this coalition has been successful? What difference should the coalition be aiming to make?

de Souza: This Public Health Leadership Coalition will have been successful if it has contributed with ideas and advocacy practices to multilateral organisations, national governments and local civil society organisations to adopt and implement evidence-informed policies to combat the syndemic.

Declaration: Melissa Sweet is a member of the Public Health Leadership Coalition.

PrevPreviousBudget Reply: setting the tone for a policy-lite election campaign
NextCOVID-19 and mental health: moral and logistical challenges and an ongoing tollNext