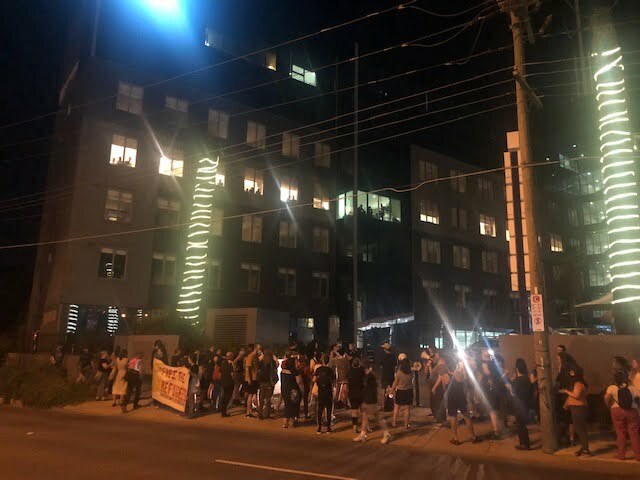 Rally held in 2020 outside the Mantra hotel in Melbourne calling for Medevac refugees to be released into the community. Photo: Marie McInerney

Introduction by Croakey: Two years after the Medevac legislation was repealed, a new report has documented how the Australian Government is failing to provide basic medical care for people in Australian immigration detention.

A forum to launch the report heard about the need to release detainees into community and calls for the media to step up reporting on the ongoing cruelty to asylum seekers.

Participants also urged health services to do what they can to put an end to harmful practices, including handcuffing of refugee patients.

The former Socceroos captain wants the plight of asylum seekers and refugees in Australia, particularly those subject to mandatory detention, to be at the top of the election agenda in 2022, alongside climate change and women’s rights.

But there is little media interest to tell critically important stories, “not just for us, but for the rest of the world”, he says, as the United Kingdom seeks to follow the Australian example to send people seeking asylum to offshore detention centres.

He railed at the “disgusting profiteering” involved in Australia’s mandatory detention system that had seen the Australian Government “park aside” its duty of care in the hands of private corporations.

“Everyone who is running for Parliament in the next election needs to be interrogated on this,” he said.

Foster was speaking at a webinar to launch a report on the Australia Government’s failure to provide essential health care to the Medevac refugees, the 192 asylum seekers brought to Australia from offshore detention on Nauru and Manus Island for urgent medical care in 2019.

He spoke alongside Thanush Selvarasa, a Tamil refugee who fled Sri Lanka but languished on Manus for seven years until he was brought to Australia under the Medevac law.

Selvarasa is also deeply concerned about UK plans to “offshore” asylum seekers by sending them to Albania or some other country, all modelled on Australia’s approach.

He co-authored a letter to Guardian UK this week, with another refugee and former Nauru workers, writing:

We have watched with dismay as the UK government has drafted legislation that allows for the indefinite detention offshore of women, men and children, refused a probing amendment to exclude survivors of trafficking and torture from being sent to offshore detention centres, and ignored the failings and financial costs of the Australian experiment, which saw the Australian government spend £8.6bn (A$13.6 billion) to detain 3,127 people in appalling conditions, while failing to end dangerous boat journeys.

We cannot imagine why any country would replicate such a cruel, costly and ultimately futile system.”

Selvarasa told the forum about his seven years on Manus, where “day by day, me and my friend, we were destroyed mentally and physically”, held captive on a “prison island”, subject to tortuous conditions, including, one night, having drunken soldiers fire into the camp.

That punishment was only to continue when he came to Australia as a Medevac refugee, taken – as they all were – into mandatory detention, with no access to fresh air and sunshine, and then handcuffed when he was taken to hospital for treatment. 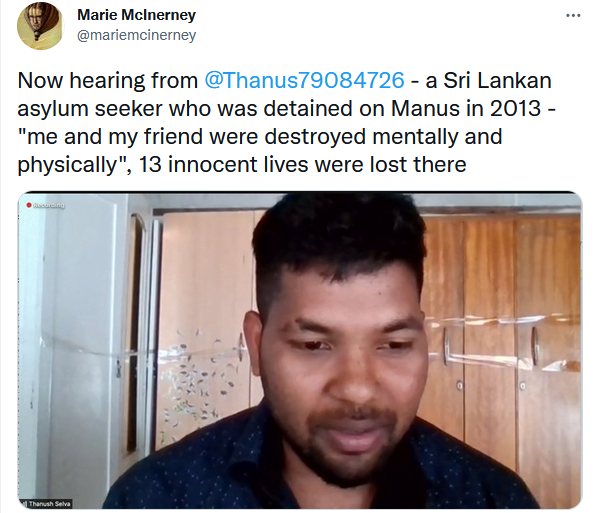 Sadly, the findings of the Public Interest Advocacy Centre report – Healthcare denied: Medevac and the long wait for essential medical treatment in Australian immigration detention, will come as no surprise to those many Australians and health organisations who have sought over years to highlight the risks of mandatory detention, which were only exacerbated during COVID.

The report outlines how all of those brought to Australia under the Medevac law, which operated for just eight months until its repeal on 4 December 2019, were detained on arrival, either in existing immigration detention facilities or cramped hotel facilities in Melbourne and Brisbane known as APODs (alternative places of detention).

That was despite many having lived in community on Manus or Nauru after proving their refugee status and evidence that ongoing indefinite detention would significantly exacerbate the health issues for which many came to Australia for treatment, it says.

Lucy Geddes, PIAC Senior Solicitor and the report’s lead author, said the Medevac arrangements, which had to be imposed on the Federal Government via a private member’s bill from former MP and former Australian Medical Association president Dr Kerryn Phelps, were intended to ensure that people detained in offshore facilities with serious health conditions could access essential medical services.

“It is absolutely appalling that two years later, people are still waiting for treatment for painful and debilitating conditions including severe gum disease, chest pain and heart palpitations,” Geddes told the forum. 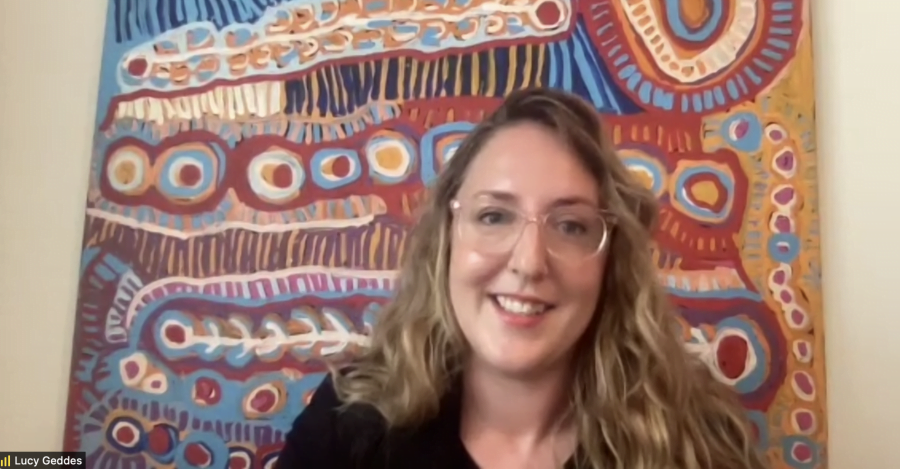 The report details how one of PIAC’s clients suffered an excruciating knee injury while being detained on Manus. When he was finally transferred to Australia and able to see an orthopaedic specialist, the specialist found that his knee was inoperable due to the severe damage and prolonged lack of treatment.

“The combination of delayed treatment and long-term confinement to a hotel room has also exacerbated some existing medical conditions. Since being transferred to Australia, the conditions of onshore detention have resulted in our clients’ mental health deteriorating to the point they have been at risk of suicide,” Geddes said.

Many Medevac refugees have been released over the past year, following concerted campaigns by community and health groups; however, some continue to be detained indefinitely, and those still held at the Park Hotel in Melbourne were recently put at grave risk in an alarming COVID outbreak.

While the overarching recommendation of the PIAC report is to immediately release all Medevac refugees still in detention into the community, the report also makes a series of recommendations to improve the quality, timeliness and oversight of healthcare in Australian immigration detention, as well as its accountability before the law.

Geddes said one of the reasons the Australian Government had been able to get away with not meeting its duty of care was that the legislation governing the treatment of people in detention, unlike that relating to Australian prisons, does not include a guaranteed right to reasonable medical care and treatment, creating what the Federal Court has called a “legislative vacuum”.

The report provides case studies, including the experience of Rashid, a 33-year-old man who fled Pakistan and was detained in 2013 first on Christmas Island and then on Manus. It details his long history of severe gum disease and dental pain in Papua New Guinea, prior to being detained as a Medevac refugee at a Brisbane hotel in November 2019.

In March 2020, a dentist recommended treatment by a periodontist and an orthodontist, but still, 21 months after his transfer to Australia, Rashid had yet to receive treatment and remained “in pain with a deteriorating dental condition”.

The report and discussions at the forum also highlighted concerns that people in immigration detention, regardless of their security profile, are routinely handcuffed in transit to and during medical appointments, compounding issues for asylum seekers with a history of trauma and torture. 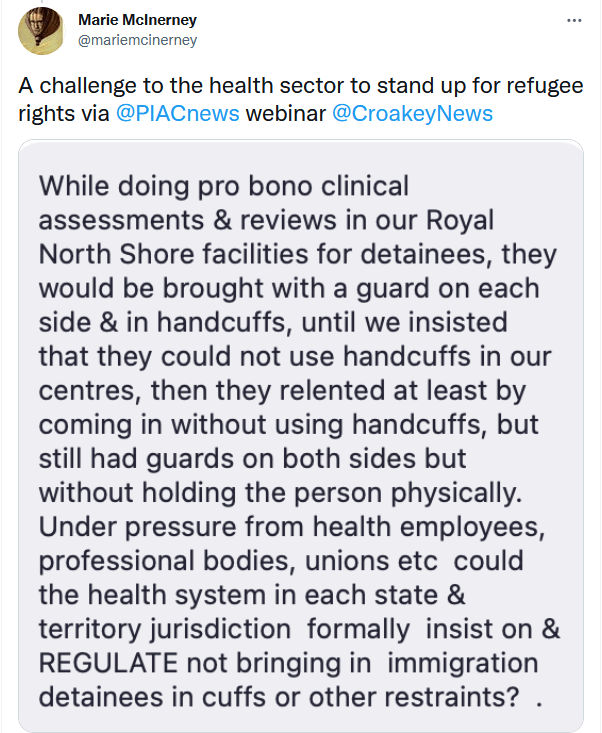 PIAC has filed landmark test case litigation in the Federal Court to challenge the lawfulness of restraints in immigration detention, noting that its client, Yasir, is living with severe mental illness and the use of handcuffs is particularly retraumatising for him and has led to frequent disruption and delay to his medical care.

“The use of handcuffs causes Yasir to have seizures, which has prevented him from attending specialist appointments. It has also led to Yasir refusing medical attention to avoid being handcuffed,” it said.

Guy Coffey, a clinical psychologist and lawyer who has conducted psychological assessments of detained asylum seekers for the past 20 years, told the forum he was a member of the Medevac panel which determined who should be brought to Australia for urgent medical attention.

He had not anticipated the type of treatment that would be meted out, including that they would face mandatory detention. Coffey said Australia’s brutal immigration detention regime had shown itself to be extraordinarily resilient to advocacy and political campaigns.

“It’s a system that’s transmogrified itself repeatedly. Many times over the years I’ve thought ‘we’re almost there’, and it just slips away through your hands,” he said of the potential for change. 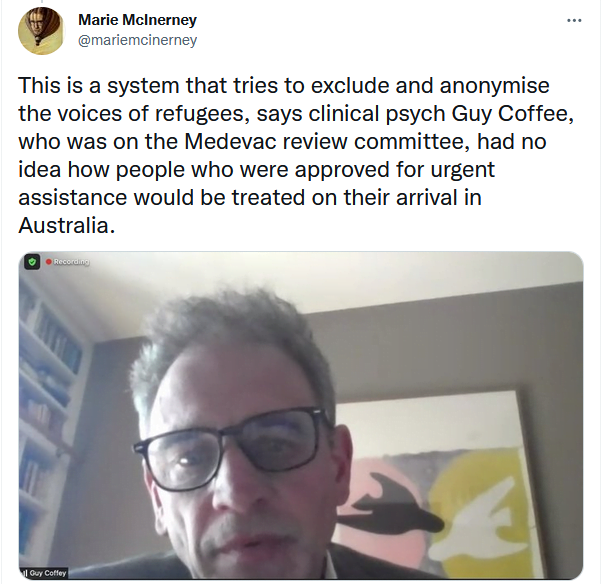 Coffey said he had been urging change on the use of handcuffs for more than two decades, while infectious disease specialists had warned from the start of the pandemic about the risks of COVID.

The difficulty in making progress was “not a cause for pessimism, but it is a cause for us to have to think very clearly and strategically about how we work our way toward improving the situation”, Coffey said.

Foster also urged the refugee advocacy sector to work more closely together, saying any division on issues – such as whether or not accepting the New Zealand offer of resettlement would undermine efforts to end offshore detention – could be exploited by the Federal Government.

Coffey said a number of factors were critical to good health outcomes for refugees.

They included safety, predictability and a clear pathway to secure residency status, family reunion in a timely way, support from the expatriate and broader communities, and opportunities to rebuild their lives through housing, income support, education, vocational training, and culturally informed health and mental health services.

“Detention negates all that,” he said. “You can’t deliver those services in a detention environment so the system itself creates an environment where it is very difficult to deliver the types of care and support that sets someone who has experienced persecution on a trajectory of recovery.”

PrevPreviousBack to the Fire: surrounded by culture in nursing and midwifery education
NextThe Minister for Unfinished Business leaves plenty of scope for successorNext